PREMO Member
ABC Detroit Asks for Stories of COVID Deaths Among the Unvaccinated, Gets WRECKED with Thousands of Vaccine Injury Reports 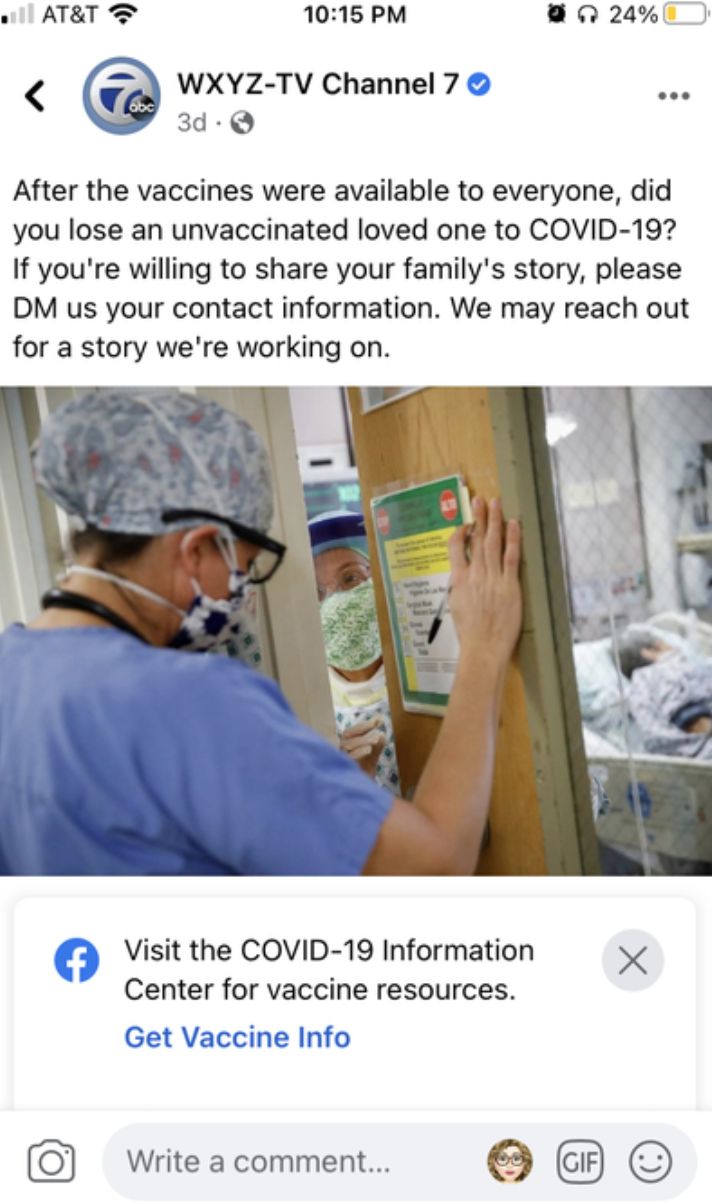 The post garnered more than 100,000 responses, almost all of which talked about family members the readers say were either injured or died after receiving the COVID vaccine. None of the reports can be verified, but the sheer number of responses is anecdotally interesting. The “ratio,” as the kids say, is epic.

The comments go on and on like this for pages and pages. With this kind of response, you would think that a curious media would look into these claims, talk to doctors, look at autopsies, and give even the slightest bit of attention to people who are experiencing unexplained tragedies. Instead, they are looking the other way and digging for stories so they can pin the pandemic on the unvaccinated. We saw the news orchestrate a fake story about “ivermectin overdoses” in order to smear the vaccine-hesitant just this month!

Perhaps, instead of demonizing people who have fears about the vaccine based on personal experience and questions about possible side effects, the media could take some time to talk to them and investigate their claims. Getting to the bottom of what is happening and why might actually help alleviate fears of vaccination. But by ignoring all these stories, the media is causing distrust of the vaccine and the establishment.

Any time there’s an obvious cover-up or suppression of people’s experiences, the masses are going to start questioning the motivation of the people writing the narrative. Whose side is the press on? The people or the government? Why don’t they ever speak truth to power anymore? If there is a problem with the vaccine, don’t they want to know? According to the commenters on ABC’s page, no one from the station has reached out to them.
H

Anyone who doesn't know by now that the media is an active stooge for the democrats is a damned fool.
Last edited: Wednesday at 8:12 AM

PREMO Member
Patron
It's the hyperbolic hysterical insistence that has solidified my decision not to get the vax. Had they come at it reasonably I'd be jabbed by now, but because they whipped out the iron fist - ridiculing and demanding, angry and insulting - they can go **** themselves.

Also, I can math and the numbers simply aren't there for this level of draconian force.

And really, anyone can run the numbers. It's not difficult. Google offers not only the current infection/death numbers, they also have a handy dandy online calculator. So if you don't want to do the math and just want to jump around like an organ grinder monkey, you have to ask yourself why. I mean, I already know why - it's because you're a glassy-eyed cultist. And what's more, you know your cult is harmful or you wouldn't be so defensive, angry, and violent with non-members.
You must log in or register to reply here.
Share:
Facebook Twitter Reddit Pinterest Tumblr WhatsApp Email Link
Top