Because When You Think Vicky's Secret You Think Megan Rapinoe


The embattled lingerie brand announced a new marketing direction on Wednesday featuring a group of faces intended to move it beyond its famous "Angel" models. One of those faces: USWNT star Megan Rapinoe.

That may sound like a surprise for those who are familiar with both Rapinoe, one of the most outspoken progressive voices in sports, and Victoria's Secret, which has long drawn criticism for its narrow reinforcement of women's beauty standards, but it's reflective of the change needed for a brand that has seen its market share sink for years.

As the brand's new head told The New York Times, it's a change that has been a long time coming:

Not that Vicky's Angel's looked like the average woman on the street .... at least they invoked a response other than wanting to barf
Click to expand...

Nothing says "sex on a stick" like a bitter, loud-mouthed, hateful lesbian with a national platform.

BOP said:
Nothing says "sex on a stick" like a bitter, loud-mouthed, hateful lesbian with a national platform.
Click to expand... 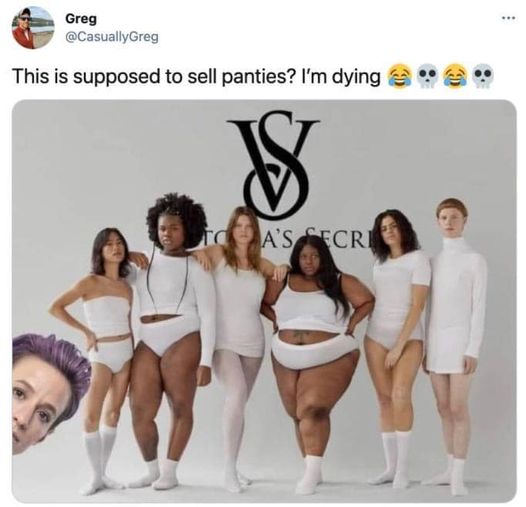