Why blame big tobacco for people who want to smoke.
Do we blame sugar growers for Diabetes?

Hijinx said:
Why blame big tobacco for people who want to smoke.
Click to expand...

GURPS said:
It's a known fact tobacco companies have gone out of there way to make cigarettes more addictive
Click to expand...

Name one company that produces a product that does not go out of their way to make their product more palatable to the buying public.
It's called Capitalism.


Biden continually expanded the scope of the crises. “One hundred days ago, America’s house was on fire,” he said, and he “inherited a nation … that was in crisis. The worst pandemic in a century. The worst economic crisis since the Great Depression.” That last claim, by the way, is manifestly false. As National Review’s Philip Klein tweeted, when Biden took over, the unemployment rate was 6.3% and the economy had just experienced two consecutive quarters of strong growth. In fact, Klein noted, during the Obama-Biden years, the unemployment rate was above 6.3% for the first five years.

Upping the ante, Biden breathlessly reported that 10 million homes and 400,000 schools and child care centers have lead in their pipes, “including in drinking water, a clear and present danger to our children’s health.” But these problems are nothing his proposed beneficent American Jobs Plan can’t solve.

Ratcheting up the projected atmosphere of crisis and laying a further foundation for the public to accept his Big Brothership, he said that the Jan. 6 attack on the Capitol was “the worst attack on our democracy since the Civil War.” Sane Twitter properly refuted this lie, noting that Biden conveniently forgot the Senate bombing of 1983. Mollie Hemingway cited the “deadly Summer of Rage with its attacks on the WH and federal court buildings, four presidential assassinations, another five assassination attempts, Pearl Harbor, and 9/11.”

But, thanks to Biden’s messianic magic, he boasted, “America is on the move again, turning peril into possibility, crisis to opportunity, setback into strength.” Notice how those three word pairings are designed to accentuate the gravity of the alleged crises — “peril,” “crisis,” “setback” — and the indispensability of big Biden government to rescue us — “possibility,” “opportunity” and “strength.” Further milking that theme, he said that the government was able to “rescue” American households through his American Rescue Plan — the government’s distribution of checks (printed money).


“Biden is expected to impose new travel restrictions on India starting Tuesday in light of the COVID-19 epidemic, barring most non-U.S. citizens from entering the United States,” Reuters reported. “The new restrictions are on the advice of the U.S. Centers for Disease Control and Prevention (CDC) and are imposed ‘in light of extraordinarily high COVID-19 case loads and multiple variants circulating in India.’”

India’s current wave of coronavirus is so severe that the nation accounted for more than half of the world’s reported coronavirus cases for the month of April. Experts warn that India’s numbers are likely being undercounted for a variety of reasons.

Following the news that Biden would ban travel coming from India, which does not include U.S. citizens, many online noted that Biden criticized Trump for banning travel from China near the start of the pandemic.


Under Biden’s super-duper, very keen tax proposal in the infrastructure bill that has nothing to do with infrastructure, the tax on capital gains would nearly double, from 20 percent to 39.6 percent. Along with raising the personal tax rate, it’s supposed to generate $1.7 trillion in tax revenue over the next 10 years from the wealthy who aren’t paying their “fair share.”

But you don’t get to be wealthy in America by paying taxes. In fact, legally avoiding taxes is fairly easy if you have a decent accountant.

A study from the University of Pennsylvania’s Wharton Business School reveals that up to 90 percent of those taxes can be avoided by wealthy people who just aren’t feeling the same sense of love and brotherhood about the government that the left feels.

“We don’t think that the proposal has a lot of teeth,” said John Ricco, director of policy analysis at the Penn Wharton Budget Model, a non-partisan fiscal policy research group at the business school. “There are a lot of games you can play to avoid paying this tax.”

Mr. Biden’s proposal is to eliminate the difference between the tax paid on wages and the tax paid on investment gains for those earning more than $1 million in any one year. The president is also expected to propose upping the top income tax rate to 39.6% from the current rate of 37%. That means equalizing the capital gains tax with the income tax would effectively double the tax rate on investment earnings to to 39.6% from the current 20%.
But very few people, even among ultra-wealthy Americans, would end up paying the new higher tax, according to the Wharton researchers.
Click to expand...

After all, the government can’t force wealthy people to sell their stocks.

Mr. Biden’s higher capital gains taxes would only apply to people with income over $1 million. Wharton’s researchers, however, believe that once an increase in the capital gains rate is passed, wealthy Americans would simply avoid selling stocks and other investments.
The wealthy could also minimize their taxes by paring gains in years when they have losses elsewhere in their portfolio, effectively lowering their taxable net gains for the year. Another strategy could be to sell off investments slowly over time to minimize the amount of tax owed in any one year.
Click to expand...

So, what this really means is that, the spend not changing, the expected revenue to pay for it not materializing, Biden will need to look elsewhere for the money.... Boy, wonder where that might be /s
H

I have said it before here.
The wealthy are in the Congress and they are not stupid enough to pass a bill that takes away their wealth.
They will always leave themselves a way out .
The only fair tax is a flat tax. No deductions no Bullsht, you pay 20% of your earnings, Period.
Everybody without exception.
And a High school could figure out what he owes.

Well: Most High School kids, there will be exceptions .

Of course not, you silly fascist goose, he saved us all, Saint Biden did. Now get to your schedule bowing and scraping........ Remember, its three bows to CNN in Atlanta, two scrapes towards DC.
H

Hijinx said:
I have said it before here.
The wealthy are in the Congress and they are not stupid enough to pass a bill that takes away their wealth.
They will always leave themselves a way out .
The only fair tax is a flat tax. No deductions no Bullsht, you pay 20% of your earnings, Period.
Everybody without exception.
And a High school could figure out what he owes.

Well: Most High School kids, there will be exceptions .
Click to expand...

Its like the Dems mantra of all the rich being Pubs and not paying their fair share. Then you find out that 7 of the top 10 billionaires are Dems. They're not going to hurt their own.

ABC-7 News in Washington reports the Biden administration has found yet another use for the COVID pandemic.

In South Dakota, Biden’s unity-branded administration is using the pandemic to cancel 4th of July fireworks at Mt. Rushmore. The fact that the pandemic was worse last year, Mt. Rushmore fireworks went forward, and there wasn’t a single case of COVID linked to that event is immaterial.

In the nation’s constitutional capital, which Biden wants to turn into its own state on a par with Texas despite the fact it has fewer people than Austin, Biden’s woke Pentagon has denied AMVETS a parking permit for their Memorial Day ride through the city they put their lives on the line to defend.

COVID is of course the handy excuse.

The Pentagon released the following statement on Friday, leaving the group little time to prepare for an alternative and burying bad news on the weekend:

Unfortunately, the department has disapproved AMVETS permit request. The department took into careful consideration all aspects of AMVETS request, to include the current Health Protection Condition status on the Pentagon Reservation; substantial community transmission of COVID-19 in Arlington County, Virginia; number of Americans fully vaccinated across the nation; nature of this event with its decreased ability to maintain physical distance; and large crowds in one location for an extended period of time. This event draws national attention and participation; therefore the risk of exposure from participants from other communities extends well beyond the National Capital Region.
Click to expand... 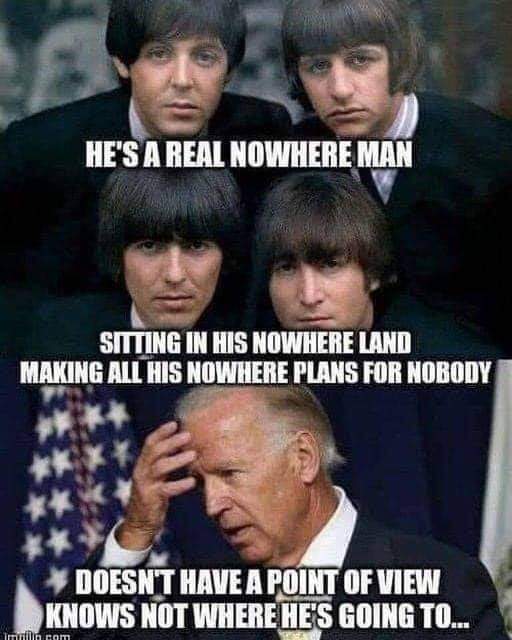 
Joe Biden's economic adviser pushed Sunday for a 'global minimum tax' for corporations in order to close loopholes in companies relocating overseas to circumvent rate hikes in the U.S.

'The idea is to make sure that corporations are paying their fair share,' Council of Economic Advisers chair Cecilia Rouse told 'Fox News Sunday.' 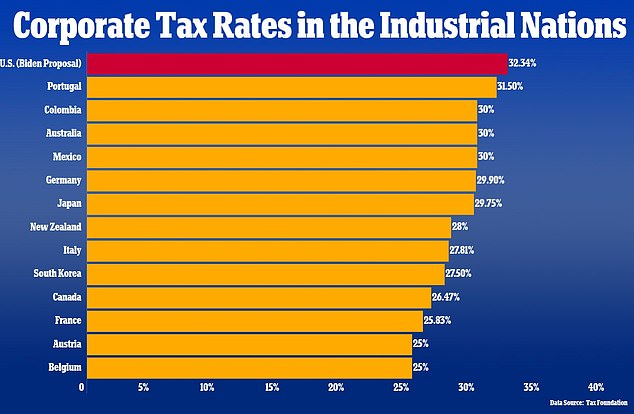 Accept most countries are SMARTER Than American Progressives ....

Whats amazing to me is that we literally just had a four year class in how to make an economy fire up and make more money for everybody. And how to make other nations treat us equitably in trade. And these people act like its the End Times
H

Yes: Trump showed them ho to make a great economy and they do just the opposite.

Printing money and just handing it out was a big mistake, but the democrats loved that one.
H

Some media reporter is going to call him what I've come to think he is, Joe Obama.

Now of course the Dems will think its a badge of honor to be tied to that name.

You're beginning to damage my calm!

herb749 said:
Some media reporter is going to call him what I've come to think he is, Joe Obama.

Now of course the Dems will think its a badge of honor to be tied to that name.
Click to expand...

Need it to be a little smoother to use if you want it to catch on.

Hijinx said:
Name one company that produces a product that does not go out of their way to make their product more palatable to the buying public.
It's called Capitalism.
Click to expand...