Not a joke. The CDC says the first thing you should do to prepare for a hurricane is get the COVID vaccine. Apparently the vaccine protects against hurricanes now. It truly is a wonder drug.
Click to expand...

It was a rough one for team Biden. It’s been a trainwreck ever since EVERYONE noticed that this administration was not going to address the collapse of the national government in Afghanistan when the Taliban rolled into Kabul on August 15. Remember Biden was on vacation as was his press secretary, Jen Psaki. For days, there was radio silence. They tried hiding in the basement. You can’t do that anymore, old man. This White House thought it was totally fine to simply not say anything about the disastrous end of our longest war. This comes on top of the thousands of Americans that are now trapped. The memos from the State Department and the Intelligence Community warned about the collapse—all summer long.

Joe is an angry old man who does not like to be questioned. Part of that is due to his arrogance which is inherent in all liberals. The second is the frustration that comes from diminished mental capacity. All of that is evident with this Afghanistan retreat. It’s a disaster. Even CNN cannot protect him, noting that conditions on the ground point to a US plan that was not really a plan at all. Failure is written all over with this withdrawal. The man who said he was going to bring back diplomacy and competence is not showing that here. And his addresses have been ripped to shreds by the entire media establishment. Even the liberal media who has treated this administration with kid gloves cannot polish his words for him. They’re simply not in keeping with reality.


“Today I’m calling on more companies in the private sector to step up the vaccine requirements that’ll reach millions more people,” Biden said during an address. “If you’re a business leader, a nonprofit leader, a state or local leader, who has been waiting for full FDA approval to require vaccinations, I call on you now to do that.”

The president requested that business and government leaders follow in his footsteps after he previously ordered federal employees and onsite contractors to get vaccinated or endure regular COVID-19 testing. The administration has also directed troops, nursing home staff and workers at federal medical centers to get vaccinated.

“Do what I did last month: Require your employees to get vaccinated or face strict requirements,” he said in his plea to leaders.

“It only makes sense to require a vaccine to stop the spread of COVID-19,” he added.

PREMO Member
Joe just announced that the 31 August deadline for withdrawals will stand. Kiss the lives of thousands of US citizens and SIV holders good bye.

PREMO Member
Biden Is an 'Impediment' to Private Afghanistan Evacuations, 'A Massive F*** Up'


Biden, apparently bored with screwing up its own evacuation from Afghanistan, is now also an “impediment” to at least one private group’s efforts to get people out of the new Islamic Emirate.

That’s according to Robert Stryk, who told the Daily Caller earlier this week that “I understand that our country may be trying to control everything or maintain it, but in doing so, they’re impeding things.”

“It’s been the U.S. private sector who has stepped in to save the blood and treasure the Biden administration is leaving behind.”

Stryk went on to describe the Biden Administration’s sit-on-its-hands approach to helping private groups like his, “frustrating” and “a massive f***-up.”

Can’t Team Biden get anything right? Just one thing?

The Daily Caller’s report comes on top of Matt Margolis’ report Tuesday night that the White House is apparently lying about how many people the Pentagon has flown out of Afghanistan. A leaked State Department memo shows numbers far below the rosy estimates released by the White House.


According to a U.S. official who spoke with the Daily Caller, it seems “doubtful we are going to bring” home the estimated 8,000 Americans remaining in Afghanistan by that deadline.

According to the report, “The number provided by the official jives with estimates recently given out by Republican Texas Rep. Kevin Brady. After attending the classified briefing Tuesday, he told reporters around 4,000 Americans have been evacuated from Afghanistan.”

The official also indicated that while there’s been no directive given not to report the numbers, “it’s become a quiet rule among officials to avoid giving out a more precise number, in part because it’s ’embarrassingly low.'”

If it was anyone else, all citizens would have been gone by now. As far as a deadline, no one else would abide by a deadline set by these scum. Move in with armed military, find those that need extricating, and escort them to a waiting plane. Anyone that raises a weapon against them gets shot on sight. This backboness-less president should be removed for incompetency now. 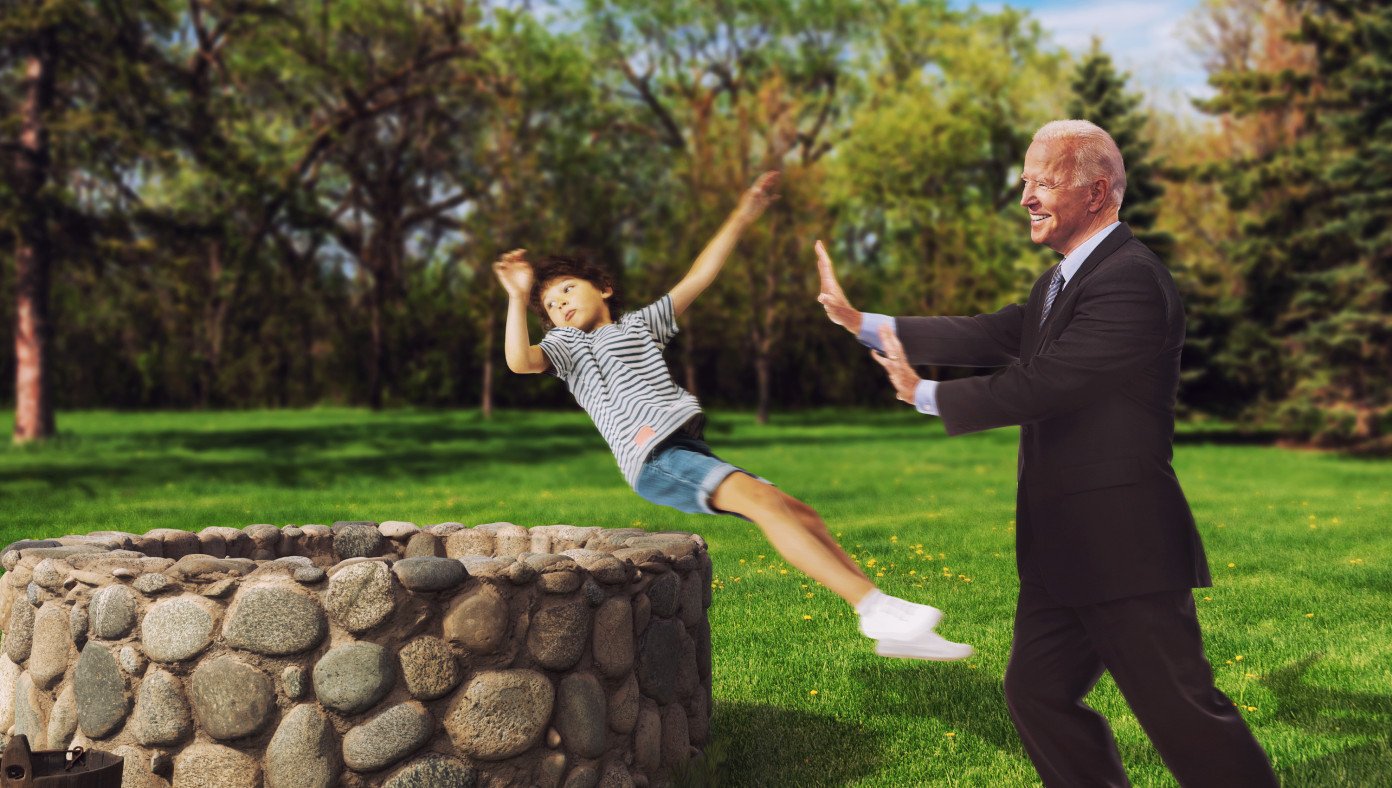 WASHINGTON, D.C.—The media are praising Joe Biden after his amazing work in rescuing a local boy named Timmy from a well, after Biden pushed him down the well last week.

Kyle said:
Joe Biden Praised For Historic Rescue Efforts To Save Kid He Pushed Down A Well

WASHINGTON, D.C.—The media are praising Joe Biden after his amazing work in rescuing a local boy named Timmy from a well, after Biden pushed him down the well last week.

No assistance from Lassie?

RoseRed said:
No assistance from Lassie?
Click to expand...

PREMO Member
Here's a story, it's sad but true
It's about a President that I once knew
Stole the election ran the nation aground
With every Marxist Squad member around

We should have known it from the very start,
This dope will prove to you that he just ain't smart,
He's bought and paid for with chinese dough,
A-keep away from-a Walkaway Joe, yea-eah-eah!
H


1. Sign an executive order on climate change. - Biden will reportedly announce this at his press conference this evening. Only through fighting climate change can we stop terrorism.

2. Take a nap and hope some ideas come to him. - Sometimes all you need for inspiration to strike is a little bit of shut-eye.

3. Knock on wood even harder. - Biden says the problem with his previous plan to knock on wood is that he didn't knock hard enough. Second time is the charm! 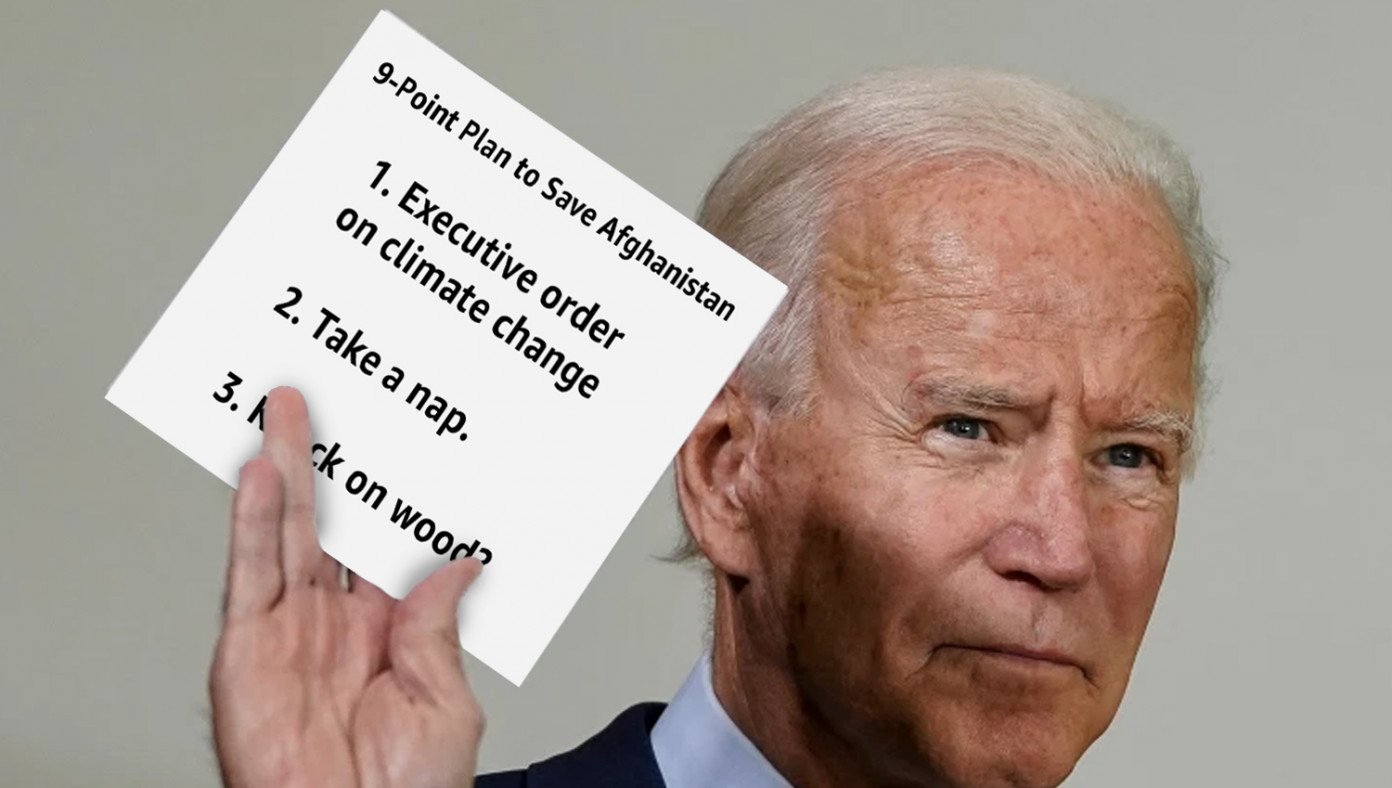 We're real journalists at The Bee, which means we have anonymous sources at the White House. Our anonymous source -- let's just call him Bob -- managed to acquire Biden's 9-point plan for saving face and righting the ship in Afghanistan. Here it is! Thanks, Bob!


"Ladies and gentlemen, they gave me a list here. The first person I was instructed to call on was Kelly O'Donnell from NBC," Biden kicked off the press conference.

PREMO Member
Baffled reporters torch Biden for sharing list of US citizens and allies with Taliban: 'This is insanity'

Marine Corps Gen. Kenneth F. McKenzie Jr., commander of U.S. Central Command, confirmed in a press briefing that the United States "will continue to coordinate" with the Taliban in providing safe passage to the airport in Kabul, and that the U.S. military had been sharing "information" with the terrorist group to help prevent such attacks.