PREMO Member
Biden Admin Warns It ‘Will Not Be In A Position To Evacuate U.S. Citizens’ From Ukraine


The news came as the Biden administration ordered the families of all American personnel at the U.S. Embassy in Ukraine on Sunday to immediately leave the country.

“The security conditions, particularly along Ukraine’s borders, in Russia-occupied Crimea, and in Russia-controlled eastern Ukraine, are unpredictable and can deteriorate with little notice. Demonstrations, which have turned violent at times, regularly occur throughout Ukraine, including in Kyiv,” the department said. “Do not travel to Ukraine due to the increased threats of Russian military action and COVID-19. Exercise increased caution in Ukraine due to crime and civil unrest. Some areas have increased risk.”

A separate report on Sunday indicated that Biden was considering deploying U.S. forces to Eastern Europe in an apparent attempt to not appear weak, although many experts warn that it is too little too late.
H

If the Democrats hadn't elected a senile old man we wouldn't be in this position,.

Hijinx said:
If the Democrats hadn't fraudulently elected a senile old man we wouldn't be in this position,.
Click to expand...


The Department of Homeland Security is now implementing rules that prevent noncitizen essential travelers crossing the border unless they are fully vaccinated.

The rules include truckers from Canada and Mexico.

Starting Jan. 22, travelers entering the United States at land ports of entry — notably along the Canadian and Mexican borders — and ferry points who are not U.S. citizens must be fully vaccinated against COVID-19, the Department of Homeland Security announced.

The requirement, which takes effect at 12 a.m. ET that day, does not apply to U.S. drivers. However, Canada and Mexico have similar regulations in place that do impact U.S. drivers — including truck drivers — who make cross-border runs.
Click to expand...

The DHS announcement was released late on Jan. 20, and was one that the trucking industry had been anticipating, noted American Trucking Associations Chief Economist Bob Costello.
Click to expand... 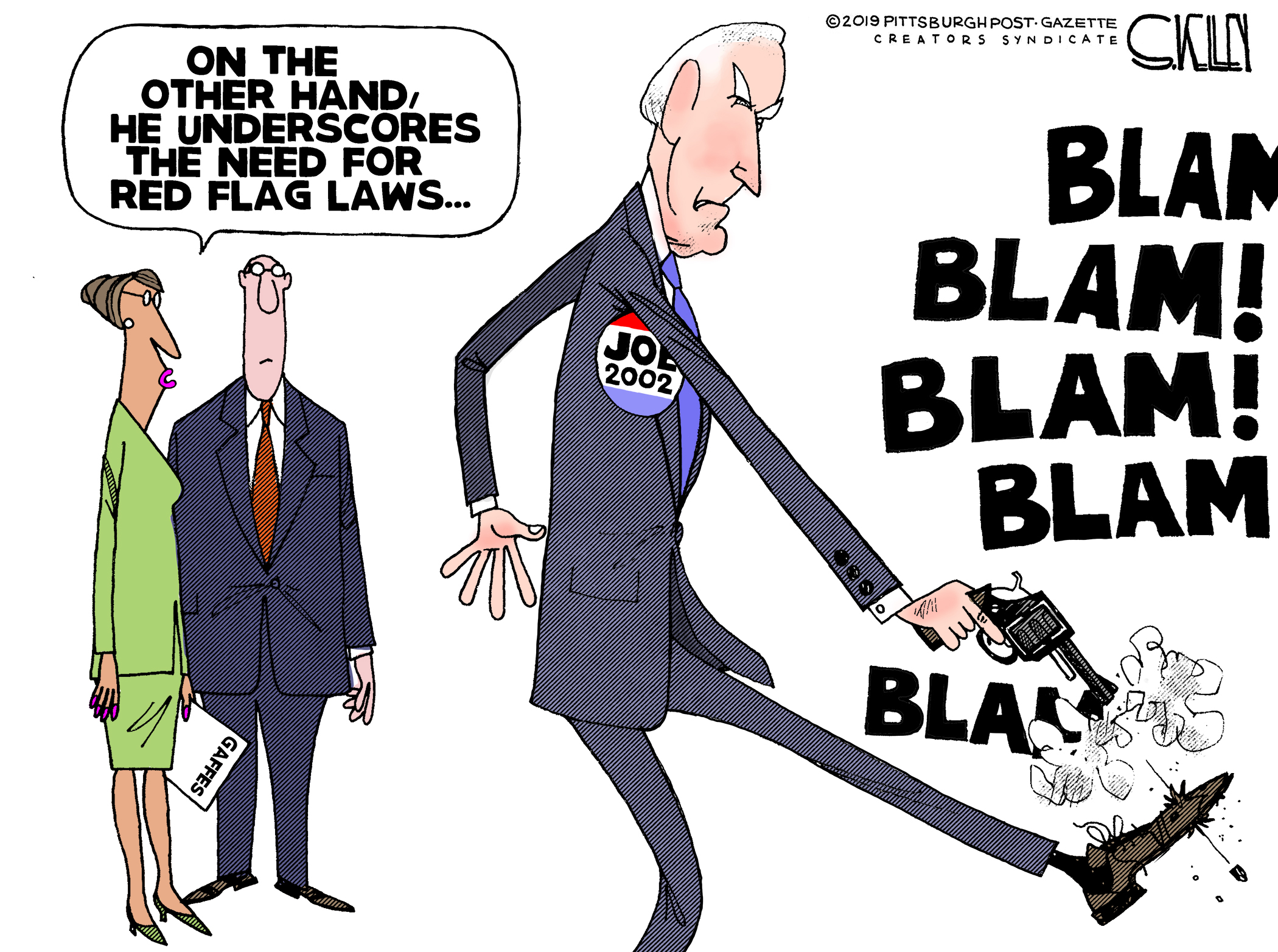 So create a staging area where a truckers pulls up, exchange trailers and continue the delivery without leaving the cab. A number of vaccinated workers assigned to the area do the actual un-hook/hookup without interfacing with the drivers.
C

GURPS said:
‘This Was An Act Of Terror’

Biden went on to take questions from the gathered reporters, who asked how the gunman — who claimed to be the brother of Aafia “Lady of al Qaeda” Siddiqui and demanded her release — had been able to purchase the weapons he used.

“Allegedly — I don’t have all the facts, nor does the attorney general,” Biden replied. “Allegedly the assertion was he got the weapons on the street.”

Biden pivoted briefly to complain about a lack of focus on the number of guns being bought and sold in the United States, noting that it was impossible to stop person-to-person black market sales and seeming to suggest that if fewer Americans were permitted to buy their firearms legally, there would also be fewer guns on the street for criminals to buy.

“We should be — the idea of background checks are critical, but you can’t stop something like this if someone is on the street buying something from somebody else on the street,” he explained, “Except that there’s so many guns that have been sold of late, it’s just ridiculous. And it’s because of the failure of us to focus as hard as we should and as consistent as we should on gun purchases, gun sales, ghost guns, and a whole range of things that I’m trying to do.”

How would ANY of the Proposed Gun Control Laws Stopped this BRITISH CITIZEN From Illegally Procuring a Weapon
Click to expand...

They require ID to buy a gun? Isn't that racist?
H

They have truck drivers with a mandate to have the vaccine while they allow illegals to cross without anything, and be flown all over America for free.
H

Sneakers said:
So create a staging area where a truckers pulls up, exchange trailers and continue the delivery without leaving the cab. A number of vaccinated workers assigned to the area do the actual un-hook/hookup without interfacing with the drivers.
Click to expand...

I was talking to someone yesterday and he said truckers he knows that's all they do. They just drive and all the rest is done for them.


herb749 said:
I was talking to someone yesterday and he said truckers he knows that's all they do. They just drive and all the rest is done for them.
Click to expand...

I wonder if long haul driver's, or other all day truck drivers, wear compression socks for the amount of time they are sitting to prevent DVT?

PREMO Member
Why Are Energy Prices Everywhere So High? Democrats

The Left’s Insanity On Energy Supply

Despite the absolute insanity of sending Commonwealth checks to Vladimir Putin rather than Pennsylvania, Healey insisted it was better for the climate. Even when the Massachusetts electric grid was teetering on failure, she insisted that transatlantic cargo ships were an improvement over domestic pipelines to a neighboring state.

It was insanity then. It’s worse now.

Massachusetts joins the ranks of many European nations enriching Putin. He has used the surplus to build his army along Ukraine preparing to invade. You didn’t think he was going to build orphanages, did you? It is Vladimir Putin, after all. Maybe the Russian army can have a disclaimer, like the ones Healey applies to campaign ads. “This army brought to you by climate change activists.”

Writing for Forbes, energy analyst David Blackmon breaks down the current state of electricity generation in New England. Despite the subsidies and the posturing of Northeastern climate-conscious Democrat politicians like Sens. Bernie Sanders, Elizabeth Warren, and Green New Deal author Edward Markey, the region has increased use of the very fossil fuels they try so hard to eliminate. Blasted New Englanders and their… heat.

They are also importing liquefied natural gas (LNG) from the Caribbean because of the now four-year old Healey logic: why buy inexpensively from your friend what you can buy at a premium from a stranger? Add to that the few thousand miles in an ocean tanker and you get a perfect formula for being an eco-warrior.


At the conference, Psaki said that the new warnings are "a positive step," but the administration would like increased efforts from tech companies to suppress false information and elevate facts.

Not long after urging companies to suppress disinformation, Psaki was asked for comment on book bans reported at schools nationwide, to which she assured reporters that the Biden administration is "pro-freedom of speech and freedom of expression."

"Our hope is that all major tech platforms — and all major news sources for that matter — be responsible and be vigilant to ensure the American people have access to accurate information on something as significant as COVID-19," Psaki said of Spotify's new content warnings. "That certainly includes Spotify."

"So this disclaimer, it's a positive step, but we want every platform to continue doing more to call out misinformation while also uplifting accurate information," she added.

Ad Free Experience
Patron
Are Jen's eyes brown? They really ought to be.

PREMO Member
Biden exposes the truth about progressives and the Constitution


President Joe Biden said what most of his party believes the other day: “The Constitution is always evolving slightly in terms of additional rights or curtailing rights.” That misconception is why Supreme Court confirmations have turned so nasty.

No: The whole point of a written Constitution is that it doesn’t “evolve” except under the arduous procedures for amending it. The Supreme Court may make new constitutional law in the course of applying it to new situations, but that’s supposed to be it.

Which is why progressives going back to President Woodrow Wilson have always hated the actual Constitution, as it limits their agenda.

These days, they’re eager to pack the high court with judges who’ll “read” that agenda into the nation’s fundamental law, which is a lot easier than convincing the people’s elected representatives to endorse their program.

Good a place as any for this video...


According to evidence that has accumulated on social media and in wider media reports, many stores are distributing N95s outside of any form of sealed packaging.

[Here’s some background on the shenanigans:

Facing calls to “upgrade” their masks, in late January, the Biden Administration withdrew some 400 million N95 masks from the federal stockpile of 737 million N95s, and decided to ship them out to grocery stores across America.

There remains no evidence that N95 masks — which were made for industrial use (think miners, construction workers, painters, etc) and are commonly used in healthcare settings — work to stop viruses.]

Take a look at what’s going on across the United States. Countless pharmacies and grocery store recipients of the federal stockpile are giving away unpackaged, already-contaminated N95s. It appears that many of the mask orders arrived in bulk packaging, instead of receiving individually wrapped masks.

As you can see below, it’s far from an isolated incident.


The Department of Homeland Security is now implementing rules that prevent noncitizen essential travelers crossing the border unless they are fully vaccinated.

The rules include truckers from Canada and Mexico.
Click to expand...

On the other hand, if you want to cross any of our borders as an illegal alien, c'mon in!