Depends on your defination of woke

Emphasising his point, Wolfe also responded with a GIF from the legendary DS9 episode, Bar Association. "Workers of the world unite", says Rom, as he unionizes the crew of Quark's Bar. "You have nothing to lose but your chains". Wolfe also shares that while he's a social democrat, he just had to "quote Marx to eff with the bootlickers."

In case Fox News needed a reminder, Star Trek fans have also pitched in, sharing other moments from the series that could be interpreted as political. This includes O'Brien's support of unions, and even an episode back from its original 1960s run that tackled racism. Fans also highlight the 1968 kiss between Kirk and Uhura, which the actors had to fight for due to attempts to censor it.

For his part, Fox News' David Marcus does concede that Star Trek has always "delved into cultural and societal issues", and "reflect[ed] American and global foreign policy." He says that it's different this time, however, because now they're making it partisan by referencing the 2020 Capitol Riots, and bringing on Democrat Stacey Abrams for a guest role. I have no idea how this is any more political than the Bell Riots, explorations of homophobia, depictions of genocide, and showing freedom fighters in a positive light. I guess Marcus just isn't happy that he might be the one getting called out this time.

It’s not like Star Trek was ever apolitical. It was downright revolutionary in its depiction of race relations and equality for women. But it drew a line at favoring one ideology over another.

But the newest entry in the Star Trek franchise, Strange New Worlds, is not shy about showing what side their taking in current political disputes.

The first blatant example of electioneering, on Star Trek Discovery, was a cameo by current and former Georgia gubernatorial candidate Stacey Abrams as none other than the President of Federation of Planets. The second was a weird plot twist in the pilot of new show, Strange New Worlds in which the 2020 capitol riot is depicted and blamed for starting a Second American Civil War and the destruction of the planet. To put it more succinctly, Orange man bad.
To be fair, since the original 1960s series Star Trek has always delved into cultural and societal issues. It has always been credited with diverse casts, with tackling issues like saving the whales (remember that?) and with reflecting American and global foreign policy.
All of that should live long and prosper, but these two recent incidents go a good deal farther. This isn’t issue advocacy, it’s pure partisan politics.
Click to expand...

Why is that a problem? Isn’t that what Star Trek has been doing all along?

But Strange New Worlds insists on hitting its audience upside the head with a two-by-four.

So, for example, almost everyone supports “voting rights” but that isn’t the same as supporting Stacey Abrams. Almost everyone condemns the Capitol riot and political violence, but that’s not the same and placing unique blame on one single event from one side of the spectrum.
Ultimately, the problem here is that this kind of political signaling is alienating for those fans who are not part of the Democrat Party political tribe. As a fan myself, it hasn’t made me turn off the shows, but it’s jarring and also breaks the narrative spell of fantasy and science fiction which is why people tune-in in the first place.
Click to expand...

So right out of the gate ST SNW decides to make itself unwatchable?

PREMO Member
You expected something different

"Defination?" Is that what this administration is doing? Defecating on the nation...

GURPS said:
You expected something different

I try to be an optimist.

Kyle said:
I try to be an optimist.
Click to expand...


Patton Oswalt’s Marvel stop-motion animation series MODOK has been canceled after a single, 10-episode season by streamer Hulu as the Marvel TV scene continues to contract and rearrange.

The series, which debuted in May of last year, featured Oswalt as the voice of Marvel Comics villain M.O.D.O.K., which stands for Mental Organism Designed Only for Killing, Variety reported. Oswalt is also credited as the series creator, executive producer, and writer for all but one episode.

Oswalt brought in some heavy hitters as guest voices in the project, including Jon Hamm, Whoopi Goldberg, and Nathan Fillion. 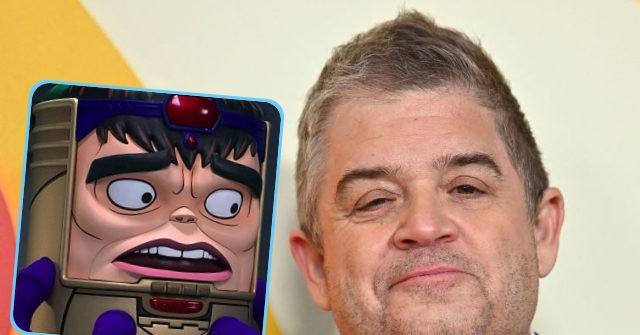