Yet, American citizens are "lured" into giving up millions of dollars a year in phone scams, and nothing at all is done. A big, "Oh well, you got scammed, be smarter next time.".
H

Sneakers said:
Yet, American citizens are "lured" into giving up millions of dollars a year in phone scams, and nothing at all is done. A big, "Oh well, you got scammed, be smarter next time.".
Click to expand...

The thing that pisses me off about the scammers is that the phone companies know who they are and they do nothing to stop it.

The uproar at Martha's Vineyard prompted the Democratic hierarchy to do some explaining. Why had it not earlier objected to the federal government night flights of tens of thousands of border-crossers to red-state communities that had opposed illegal immigration?

And why be angry with governors who were only emulating that policy by flying in a mere 50 newcomers -- in the light of day -- to a far wealthier and liberal-minded sanctuary resort?


Florida Governor Ron DeSantis gave the nearly all-white, rich vacation spot an opportunity to match noble words with even nobler deeds. But in response, the 1 percent screamed that their small community could not possibly cope with a mere 50 new arrivals.

So far, wealthy progressive enclaves in Malibu, Aspen, and Napa have not stepped up to alleviate the "burden" put on their Martha's Vineyard brethren.

They should ask how does a poor Yuma or El Paso sustain hundreds of thousands crossing illegally into their communities -- once Joe Biden effectively rendered federal immigration law null and void?

The Martha's Vineyard vacation mansion of the Obamas is currently vacant, as are most of his neighbors' estates. Their sizable and expansive grounds could still serve as ideal centers for hundreds of immigrants to camp out.

The advocacy law firm Lawyers for Civil Rights filed the lawsuit Tuesday with Alianza Americas, an immigration nonprofit, on behalf of “Vineyard migrants and all similarly situated people who are fraudulently induced to travel across state lines by DeSantis and the State of Florida.” Three nonprofits in Soros’ Open Society Foundations (OSF) network have notably given almost $1.4 million to Alianza Americas between 2016 and 2020, according to OSF records.

“Soros’ vision of a global ‘open society’ hinges on wrenching open every country’s borders, whether the citizens of those countries want to or not,” Hayden Ludwig, a senior researcher at the conservative investigative think tank Capital Research, told the Daily Caller News Foundation. “We’ve traced tens of millions of dollars flowing through his Open Society Network into open borders groups in America, Europe, and the developing world, always with the same goal: Undermining national sovereignty.”

OSF is a charity network that includes the three nonprofits Open Society Institute, Open Society Policy Center and Foundation to Promote Open Society. The grants were “to support policy advocacy on immigration” and other immigration-related causes.

Not surprising in the least.

That man is a genuine enemy of America.
H

Kyle said:
Not surprising in the least.

That man is a genuine enemy of America.
Click to expand...

And he has 3 sons that will carry on destroying countries when the old turd dies.

PREMO Member
I reported earlier about some very petty action on the part of Joe Biden when it came to dealing with Hurricane Ian in Florida.

Biden and the White House made it very clear that he’d spoken personally with three of the mayors located in the area of that state that is likely to get hit the hardest by the hurricane. But despite making the time to speak to each of those mayors, he somehow couldn’t find the time to call Florida Gov. Ron DeSantis — the guy in charge of the response in the state, the guy that you would normally call in such a situation. Not only did he avoid calling DeSantis, Biden even encouraged the mayors to call him directly. While he can certainly do that, it looked again like he was trying to end-run around DeSantis. When pressed by reporters, the FEMA Director and White House Press Secretary couldn’t answer as to why Biden hadn’t personally spoken to DeSantis.

I don’t get what was in Biden’s mind. Yes, he’s petty, but this was putting it on high display in a very juvenile way. That didn’t make him look good, and it certainly didn’t hurt DeSantis — if that was Biden’s intent. 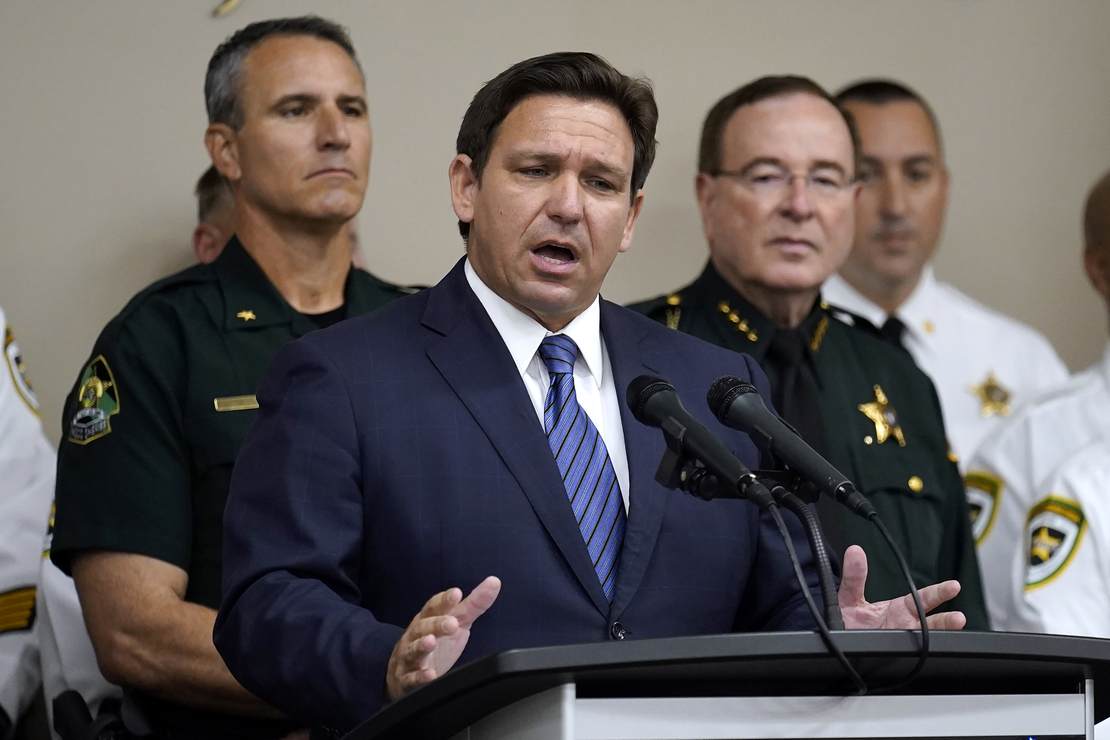 Democrat Bennie Thompson, chairman of the Homeland Security committee, sent a letter to the knucklehead Biden appointed as Secretary of Homeland Security, demanding that the department investigate Republican Governor Ron DeSantis over the deportation of illegal aliens to Martha's Vineyard.

This is the latest effort by Democrats to use the Fascist Bureau of Intimidation to criminalize political dissent.

They spied on Trump when he was a candidate. They turned a peaceful protest at the National Mall into a Fake Insurrection by opening the heavy Capitol doors to protesters. They confiscated the cellphones of dozens of Trump officials. They SWAT-ed a pro-lifer for a year-old local charge that was dismissed by the courts. And of course, they raided Mar-a-Lago over what amounts to an overdue library book that may not have been the library's to begin with.

The excesses of the FBI should force Republicans to end its power to arrest, surveil or execute warrants because the FBI has abused each privilege. The constitutionality of this agency is at best vague.

Why it matters: Thompson is urging the Departments of Homeland Security and Justice to probe whether coercion was involved after some of the migrants filed a lawsuit against DeSantis alleging Florida officials used "bold-faced lies" to mislead them about the flights.

What he's saying: "I write with grave concern regarding the allegations that the migrants who were flown to Martha's Vineyard on September 14th were coerced to board the flight through false information," Thompson said in the letter.

There is little surprise there would be hurricane response second-guessing in the aftermath of Ian since last week we saw the first-guessing when the press wanted to blame Governor Ron DeSantis for hurricane failures – before the storm even arrived. And the blame has arrived in full force.

It is noteworthy that when a Republican is in the White House, the president is responsible for any failings in natural disaster response. When it is a Democratic president, we are learning that all criticism falls on a GOP governor…even when it is unclear what to blame him about. One local political outlet pretends that DeSantis was inactive ahead of the storm, something his communications team was quick to unravel.

PREMO Member
The media can attack Gov DeSantis all they want! He's a Governor with balls and fights back! It's fun to tune in nightly to the news and see the Gov telling off another media idiot. >schadenfreude<

Sit down idiot and shut up.

Florida governor Ron DeSantis (R) claimed that “national regime media” wanted Hurricane Ian to hit Tampa to “pursue their political agenda” without regard for the people impacted by the storm. Said DeSantis: “Quite frankly, you have national regime media that they wanted to see Tampa, because they thought that would be worse for Florida. They don’t care about the lives here. If they can use it to pursue their political agenda, they will do it.”
H

Tropical Storms & hurricanes cause destruction. There's no way around it. It was said this was the 1st storm in 100 yrs that came through that area. Their luck ran out.

The first liberal shots were misfired before Ian even made landfall, as Andrew Sullivan and other wags tweeted that DeSantis was one heck of a poseur as far as sending migrants on airplanes, etc., but what was going to happen when he ran into a real-life disaster. I took pleasure in disabusing them,


On September 27, as Ian was approaching, the media, FEMA, and the White House tag teamed a preparation “complacency” narrative in an effort to damage Florida’s response before it even hit, and DeSantis – the man who’d declared a state of emergency 4 days prior, already called up 5000 FL National Guard, had another 2000 on standby, power crews from all over the country staged to roll in immediately after the storm, his teams constantly coordinating with country emergency management officials throughout the state (considering, up to that moment, Ian’s track encompassed practically the whole state), and so forth – smacked it down brutally hard.

In fact, for all the whimpering about DeSantis and complacency, it was the Biden administration that was a little behind the curve. As always.

PREMO Member
The next scandal they desperately tried to whip up concerned FL First Lady Casey DeSantis as the face of the Florida Disaster Relief Fund at Volunteer Florida. Word went out to torpedo donations to the fund, as it was just a front for the DeSantos reelection campaign and nefarious GOP purposes.

What is it with these New York liberals always piping up? Vile people.


Well, poop. Turns out the Florida Disaster relief fund isn’t for Casey DeSantis to buy campaign hoodies with, nor is it a GOP money laundering scheme. It’s a private state fund, specifically for handling donations after natural disasters, established not this month, nor year, but in 1994 by…*gulp*…DEMOCRATIC Gov Lawton Chiles. It’s also rated at 100 pts on Charity Navigator. POOF! There went that.

DeSantis vs. Newsom: Gas Prices over $3 Lower in Florida​

Newsom has for months made a noticeable effort to criticize Florida and DeSantis’s handling of the state, going so far as using the Fourth of July weekend to urge Floridians to flock to the Golden State.

“I urge all of you living in Florida to join the fight or join us in California, where we still believe in freedom: Freedom of speech, freedom to choose, freedom from hate, and the freedom to love,” he pleaded at the time, following up weeks later by mocking “freedom-loving” governors.

Last month, Newsom deemed the Sunshine State governor a “bully,” speaking at a Texas Tribune festival where he further expressed his obsession with disliking the Florida governor.

“I worry about Trump. worry about Trumpism. I worry more about Tucker Carlson. I worry about Ron DeSantis. He’s a bully,” Newsom said before criticizing the state for threatening to fine the Special Olympics over implementing vaccine mandates, which put participation in jeopardy for numerous athletes, even leading some to endanger their own health.

Despite the Democrat’s barrage of attacks and open support of DeSantis challenger Rep. Charlie Crist (D), many of the Sunshine State’s successes speak for themselves. Perhaps most notably, Florida is enjoying gas prices more than $3.00 lower that Newsom’s California.
You must log in or register to reply here.
Share:
Facebook Twitter Reddit Pinterest Tumblr WhatsApp Email Share Link
Top