PREMO Member
'There was no subpoena as he says in a tweet this morning, so, maybe there does need to be a rematch,' she continued.

And then in a stunning declaration, she deadpanned: 'I mean, obviously, I can beat him again.' 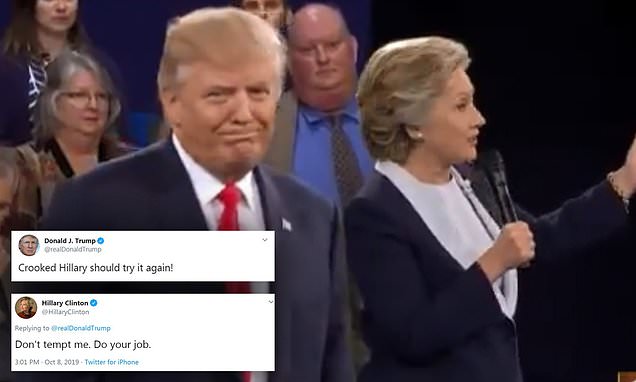 Trump says Hillary should run. She claims she 'could beat him again'

The president trolled her on Wednesday, reposting a video clip from their debate three years ago - to the day - in which he quipped that if he were president she would be behind bars.

Of course. She thinks she beat him last time.

Sorry, sweetheart but if "popular vote" elected Presidents, he'd have campaigned in more states, because if the point is the most VOTES,
you don't have to win all of California or New York or Massachusetts or Illinois - just get more votes out of them.

It's still a lot like a team that lost the World Series gripe that they got more runs. But that's not what wins a series.

There's no way she runs again. First, she clearly has disdain for EVERYONE else running for the Democratic nomination.
Second, she really isn't healthy enough for it, mentally or physically.
And lastly, I think Democrats are tired of someone who's lost twice. They don't want a three-peat.

PREMO Member
I hope she runs almost as much as I hope the Dems get on with a formal impeachment process.

PREMO Member
I'm now glad she got more votes than the president. That must really chap her ass knowing she got the popular vote but didn't get the throne. Suck it.

And, contrary to the lying poll from...whenever it was, the only energy the Dems have going right now is the energy to run away from their party to come over to the WINNING side...
You must log in or register to reply here.
Share:
Facebook Twitter Reddit Pinterest Tumblr WhatsApp Email Link
Top