HemiHauler said:
BTW, you know you can send a single e-mail to several people, yes?
Click to expand...

Dude, how old are you? My friends and family members under the age of 50 don't even have an email address - they either text or check into FB. I'm the only weirdo that checks email several times a day because of work. My cousin posts pics of his new baby on FB, so that's where I am.

It's just that I'm not willing to give up my privacy to get it.
Click to expand...

The only thing that FB knows that the rest of the internet doesn't is what my pond looks like at sunset and what I made for dinner. You don't have to put your whole life on FB, and you certainly don't have to reply to randos who bet you don't remember who your favorite teacher was or what street you grew up on.

It's free to use, which means you are the product being sold.
Click to expand...

I signed up understanding that and knowing that if I wasn't paying for their service someone else was.

Have the audacity to complain incessantly when OMG OMG OMG OMG FB is CENSORING!!!!! Oh the Hugh Manatee!!!!!!
Click to expand...

Are you kidding? Have you forgotten what I do for a living? That one little chit comes on here every week it seems with a new screen name because his last one got banned because he can't control himself. Then he has the nerve to email my boss (aka "me") bitching because he's being "censored".

IN FACT FB billed itself originally as "free speech on the internet". That was a major selling point. And once they had their audience sucked in, they changed it and now censor anyone whose political bent they don't like or who mocks the Great God Fauci. I'll bitch about that if I want. The DU was upfront about their rules: no conservatives allowed, even hint that you might not be full on Left and you will be banned. I respect that and there are probably still posts on here where I say so. FB, on the other hand, pulled a bait and switch and that is bullshit.

I don't care that you don't use FB. It makes absolutely no difference to me. What I mind is that you have this phony "I'm above it all

" thing going on that irritates me enough to give you chit about it.

vraiblonde said:
IN FACT FB billed itself originally as "free speech on the internet".
Click to expand...

Indeed. It was PRECISELY because of that, that we learned 8 years ago, it wasn't allowed in China. No YouTube either, and most other social media. And if I'm not mistaken, Google and other search engines have restrictions in them, in China.

The LAST thing they want in China, is free speech.

Do you want to know the reasons why they don't allow it? SAME reasons given here - to stop dead in its tracks false information to get into the public domain. It is done to protect the greater good.

And I'm with you, here, about Facebook. I don't use it at all to discuss political or social issues, and I usually turn chatter off from someone who can't stop talking chit. For some people, Facebook is a soapbox.

FB is VERY useful for staying in touch with friends and especially keeping up with friends who live locally. It's outstanding as far as propagating information to people belonging to certain organizations. I'd miss lots of important events and meetings were it not for the very timeliness and convenience of posts.

The only thing I have that comes CLOSE to the convenience is that my extended family has a huge Messenger group list where family things are borught up. And well, THAT is technically also Facebook.

Virtual worlds online have been around for years. What he describes has been around in some fashion at least since the 2000's, like "Second Life", which came out in 2003. I'm guessing with the popularity of virtual reality headsets, and the ease with which friends and family can use Facebook, he can make the transition easy for people. I probably won't be using it - probably for the same reason I would much rather READ an interview on a page than sit through one, online. It's why I almost never watch whole podcasts or waste time on long YouTube videos.

I just don't have THAT much time. With FB, I can "catch up" with just about every one I know in a few minutes. I don't have to personally engage with any of them.

HemiHauler said:
I understand the intended purpose. I mange to do all of that without the assistance of a company whose sole purpose for existence is to invade my privacy and sell me to their customers.
Click to expand...

You can't even spell MANAGE without assistance...
B

Just looking at Mark Zuckerberg makes by stomach turnover. I don't FB nor do I tweet. I like email, because I prefer to communicate via the written word. Others prefer to communicate through social media and I'm okay with that. As far as keeping up with my peeps, I call my family and friends and occasionally visit their homes.

I think this metaverse is a terrible idea for the same reason I'm not comfortable with FB and twitter. When talking about failures, successes, births, marriages, telling jokes, there is nothing like a pat on the shoulder, a shared tear or laugh, a hug, a dance. You can't get that from social media. 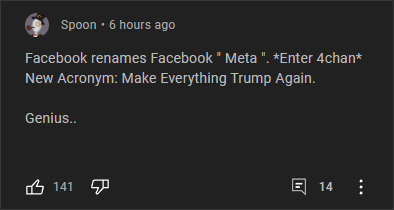