[W]here are the environmentalists in all this? They are doing their best to reduce agricultural output. In Sri Lanka, the government mandated organic farming, with the result that yields declined catastrophically, prices skyrocketed, and, no doubt, many died.
Click to expand...

The London Times had a more detailed account last month, headlined: “How Sri Lanka’s shift to organic farming left it in the manure.”

What turned Sri Lanka’s economic situation from difficult to catastrophic was the decision by the Rajapaksa government to implement a nationwide ban on synthetic fertiliser. It was made not at the behest of neoliberal economists doing the bidding of global capital, but rather on the advice of environmentalists in the name of sustainable agriculture.
***
[T]hat strategy backfired in spectacular fashion. Domestic rice production fell by 14 per cent from 2021 to 2022, forcing the nation, long self-sufficient in rice production, to import hundreds of millions of dollars of rice and more than eroding all of the savings from ceasing fertiliser imports. On top of that, the ban decimated tea production, leading to a $425 million economic loss to the industry in its first six months of implementation. Tea, one of the nation’s primary crops, is a key source of its total export income, making a bad foreign exchange situation far worse.
***
Any competent agronomist could have predicted the result. And many did. Long-term use of synthetic fertilisers had helped Sri Lanka become not only food-secure but a major agricultural exporter. A survey of Sri Lanka’s farmers last July found that 75 per cent of them relied on synthetic fertilisers. For crops that are crucial sources of foreign currency and domestic food security — tea, rubber and rice — the dependence was even higher.
***
But the government ignored its own agricultural experts, instead convening representatives of the nation’s small organic sector to guide the nation’s agricultural policies. The result turned a bad situation into a disaster.
Click to expand...

It is hard to overstate how destructive contemporary environmentalism has been around the world. Here in the U.S., we haven’t seen the kind of economic collapse experienced by countries like Sri Lanka, but it isn’t because the greenies haven’t been trying.

Oil and natural gas companies must reduce their absolute emissions by 26% by 2030, based on 2019 emission levels, Wells Fargo said last week. Other power sector businesses must see a 60% reduction during the same time period.


The new rules from Wells Fargo are part of a trend from financial institutions around the world to implement such climate regulations for its lending programs, joining the likes of Citigroup Inc. and the United Nations-convened Net-Zero Banking Alliance. The alliance is an industry-led coalition of banks from across the globe with the goal to align their lending and investments with net-zero emissions by 2050.

Electric-grid operators from across the country are warning of the potential for blackouts as companies attempt to transition to green energy sources.

"I am concerned about it," MISO Chief Executive John Bear told the Wall Street Journal in a report Sunday. "As we move forward, we need to know that when you put a solar panel or a wind turbine up, it’s not the same as a thermal resource."

Extreme heat and wildfires over the summer could lead to a shortage of energy in California, the state's grid operator told WSJ. The Midwest could face similar issues with MISO warning of capacity shortages that could lead to outages.

The issue is on the rise throughout the country as many traditional and nuclear power plants are being retired to make way for renewable sources of energy, but the plants are going offline faster than renewable energy and battery storage can keep up.

PREMO Member
Howard, during a PSC session Thursday, said local pols “totally obfuscated” the costs of the plan because the sticker shock would have made the initiative unpopular.

The law, which Cuomo signed in a ceremony with Al Gore at his side, requires New York to slash greenhouse emissions by 40% by 2030 and no less than 85% by 2050 by transitioning from fossil fuels to renewable energy sources, such as hydropower, solar and wind. The state Climate Action Council, meanwhile, is charged with developing a plan to put the state on a path toward zero carbon emissions.

Lawmakers, Howard said, refused to directly vote to raise taxes to pay for the capital investments required to develop cleaner energy alternatives to fossil fuels — and left the PSC to be the fall guy.

The commission — which regulates power utilities — was tasked with approving rate increases to pay for the capital investments required to comply with the new green-deal inspired law.

Con Edison and other utilities will pass on those costs to customers. 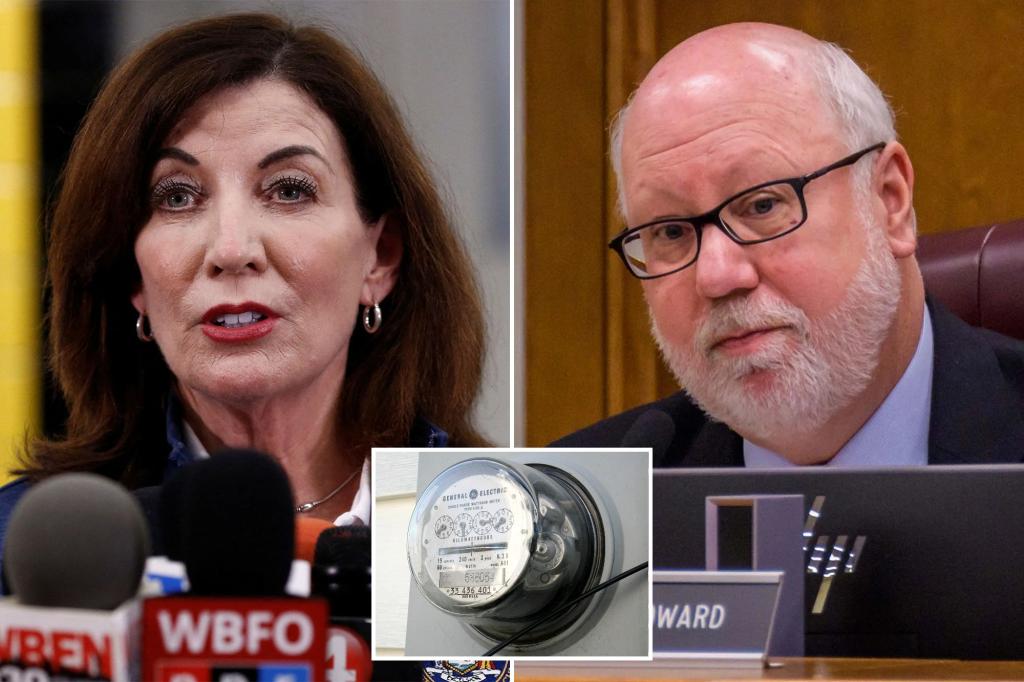 New Yorkers will have to pay “hundreds of billions of dollars” in higher utility bills due to the state’s “Green New Deal”-inspired plan, according to a top energy regulatory offi…

These suspicious donations to radical environmental groups could be part of the larger geopolitical strategy Putin used to execute greater control over Europe before his invasion of Ukraine. For instance, if the United States had ramped up natural gas production, Putin could not today be blackmailing Poland and Bulgaria by cutting off their energy supply. Had America allowed more investment in fracking and other energy production, Putin would not have strategic leverage over Europe.

Most Americans know Putin does not want to see the United States succeed. What they may not know is these anti-energy groups acting under the guise of “environmental justice” are funded by a handful of wealthy Americans who are either blindingly naïve to the role they have played in supporting Putin’s agenda or willfully complicit.

There is no more notorious example than the Heinz Endowment, led by Teresa Heinz, wife of U.S. climate envoy John Kerry. Under her watch, the endowment has deployed at least $13 million toward anti-shale activism since 2008, killing jobs and prosperity in their own Pennsylvania backyard and unnecessarily forcing America to give up market share to tyrants like Putin.

In fact, Pennsylvania, where the Heinz family made their fortune and is still based, is bearing the brunt of this campaign. The latest example is the Keystone State’s addition to the Regional Greenhouse Gas Initiative. Sierra Club and NRDC lobbied in favor of expanding the interstate compact to tax carbon emissions to include Pennsylvania, even though scientists at Penn State found 86 percent of carbon emissions will simply move to nearby states.
You must log in or register to reply here.
Share:
Facebook Twitter Reddit Pinterest Tumblr WhatsApp Email Share Link
Top