Greetings and Merry Christmas from Charleston!

Needs Christmas lights across the awing.

That will happen tomorrow.

PREMO Member
Patron
We went on a walkabout today - man, there's a lot of stuff in Charleston and the area. We went down to the Battery to walk around a bit and did a windshield tour of downtown Charleston. I'm making a list of the things we must see, then a secondary list that we may or may not get to.

My favorite thing I've eaten since we left last May is still the meat bowl at Tacopocalpyse in Des Moines, but my new second favorite is the Brew Board at Liberty Tap Room in Mount Pleasant. It's a snackie plate with a scoop of pimento cheese (which I didn't think I liked until I had it fresh made), pickled onions, bread and butter pickles, bacon deviled eggs, and fresh made cajun pork rinds. OMG.

They have all kinds of super cool specialty markets here, which I'm a sucker for so I'll have to watch my spending. Nobody needs three different steak sauces and four kinds of artisan foot balm.

Love that city, and this time of year it's livable. Lots of great places to eat. Spice shop in the market downtown is pretty cool.

PREMO Member
We are sitting here with the side door open enjoying the fresh air. There is a 30 acre lake here that will have to be fished at some point.

Anything that we need to see or do while we are here? Go.

Monello said:
We are sitting here with the side door open enjoying the fresh air. There is a 30 acre lake here that will have to be fished at some point.

Anything that we need to see or do while we are here? Go.
Click to expand...

Ah, I know where you are, that place is beautiful. We were going to come down and stay there before the daughter moved away.

Monello said:
We are sitting here with the side door open enjoying the fresh air. There is a 30 acre lake here that will have to be fished at some point.

Anything that we need to see or do while we are here? Go.
Click to expand...

We went to Ft Sumter. It was pretty cool. https://www.nps.gov/fosu/index.htm

When we went to Heart Mountain, which was a Japanese internment camp in Wyoming, it was quite visceral. They brought it to life: what these families went through, how if affected them, how they were treated, the aftermath when they were released. It was quite poignant and really made you think.

The slave market in Charleston was way more sanitized. Displays and verbiage, a few ball and chain displays, nothing that really reached out and grabbed you. If you weren't educated on black slavery in America, you'd think, "Well that doesn't look so bad."

They told you about it, but didn't make you feel it. Didn't make it real. And there are a ton of artifacts still in existence that they could have used to make it a better historical endeavor.

In fact, I really thought there would be more Civil War history in Charleston area. There is, but it's very much just the "good" parts - historic homes, happy working plantations, etc. Charleston has a very important place in our history books, with regard to not only the Civil War, but the Revolutionary War as well. Much of it is quite ugly, but so what? I want to immerse in history, and Charleston isn't cooperating with me.

I'm about 100 pages into The Price of Nationhood (The American Revolution in Charles County) bye Jean Lee that mentions that little is known about black slavery from the slaves perspective (at least in The Chuck) because there is no written document by the slaves themselves written during the 18th century. Anything that speaks to slavery is all from the white man's perspective, wills, court judgements, etc. In that way, I think anything we know about slavery is sanitized. 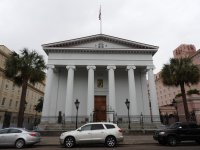 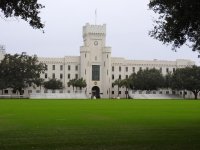 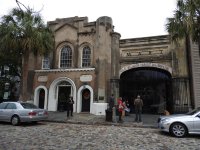 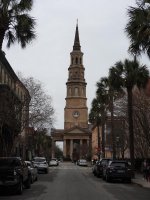 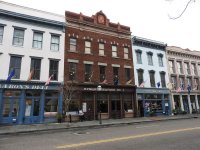 Two days of bitter cold - low 30s during the day and low 20s overnight - AND our water source froze up. We always have bottled drinking water, and Monello filled up a jug of water for the toilet. It was an inconvenience, not an emergency. In Maryland, however, I was prepared for winter unpleasantries with heavy coat, mittens, boots, etc. On the road, for some dumb reason, it didn't occur to me to be winterized. I didn't figure we'd be in anything really cold and wintery, so all my gear is packed away in storage.

In the motorhome, we have a furnace and two small space heaters, so we were quite toasty. Went to Whole Foods and got some of their prepared soups and meals so we'd have something besides restaurants and junk food to eat. Normally when snow/extreme cold threatens, I'd cook like crazy; in this situation I bought prepped comfort food.

My favorite coffee here is Charleston Coffee Roasters' Southern Pecan. I get it at Boone Farm Market about a mile from our campground.

Umi Japanese - I'm crazy about Asian food, Monello is less enthusiastic but still game. I was dying for bibimbap, and also had a lobster volcano roll - amazing!!

Jack's Cosmic Dog - this is a stupid hot dog shack with super dogs and fries. It's eccentrically decorated with kitsch and junk - we only ate there once but if it were up to me we'd have taken every meal there.

Community House Pizza - ate here twice and the pizza is amazing. They had arancini for appetizer AND brussel sprouts. Supposedly the pizzas are singles, but they're actually doubles. Cheap eats and really good.

Henry's House - I love this place! We were wandering and shopping downtown and I saw that Henry's had a rooftop bar/dining. It's meandering and old school, with passages and nooks, and the roof dining is the coolest ever. I had grilled shrimp tacos and Monello had Mediterranean chicken sam.

Melvin's BBQ - we ate here twice too. Great BBQ and Monello's favorite, burnt ends. The sides are down home Paula Deen, but they have a pickle bar with giardiniera and peppers that are a major draw for me.

Liberty Tap Room - this is a boring bistro BUT they have a snackie plate that is the second best thing I've eaten since we became homeless. Homemade fresh pork rinds - really????

Page's Okra Grill - we had brunch here on New Year's Day and I don't even remember what I had except that it was good, but the STAR! is the Bloody Mary bar. I don't care about Bloody Marys, but the bar had garnishes so extensive that you'd get it just for the food.

We've been to a bunch of other restaurants - Hyman's, The Lot, Fleet Landing, etc - and they were good but didn't stand out hard. Charleston area is a restaurant paradise and we're fairly jaded by now so it really has to have something original and unique to make us care.

We ate at a place called Aya Cookhouse, which was Asian but all hipster and disappointing. We like a more authentic experience with our Asian dining, and this wasn't it, although the food was really good. It would have made this list above if not for the bistro decor and snark ass waiter who patronized me by explaining that their ramen wasn't like what you get at the grocery store.

I guess I looked like I just fell off the truck or something.

We also rolled into a #### bar called, I think, Richard's? We like our dive bars and this one had - ready? - deep fried asparagus as an alcohol absorber. I asked our bartender and she said that they don't make it there, they get it from the prefab food guy. That means every single bar and restaurant can get them as well. So why don't they??? That pissed me off for days - and still pisses me off when I think about it. That was the best bar snack I've ever had, hands down. Those need to be a thing.