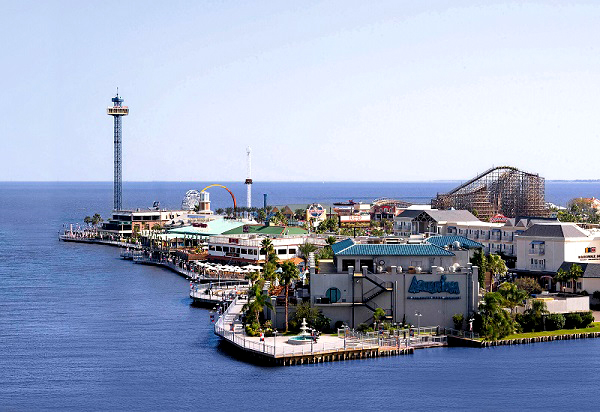 It's just south of Houston, about 10 miles from the Space Center, and my initial impression is we're going to have a fun-filled week here.

It's not really a campground, it's an RV resort mostly filled with people who live here full time. It's right on a stocked lake with a boardwalk around it, and it looks like a public park with upscale covered picnic areas set up all over the place. Our site is just a few steps to the lake and picnic areas.

It's about a mile from Kemah Boardwalk (shown above), which is the main attraction for this area, but there are also like 8 million kitschy unique restaurants and bars. That's annoying because I will want to drink at them, but yesterday's attempt killed my stomach after one Shiner Blonde. 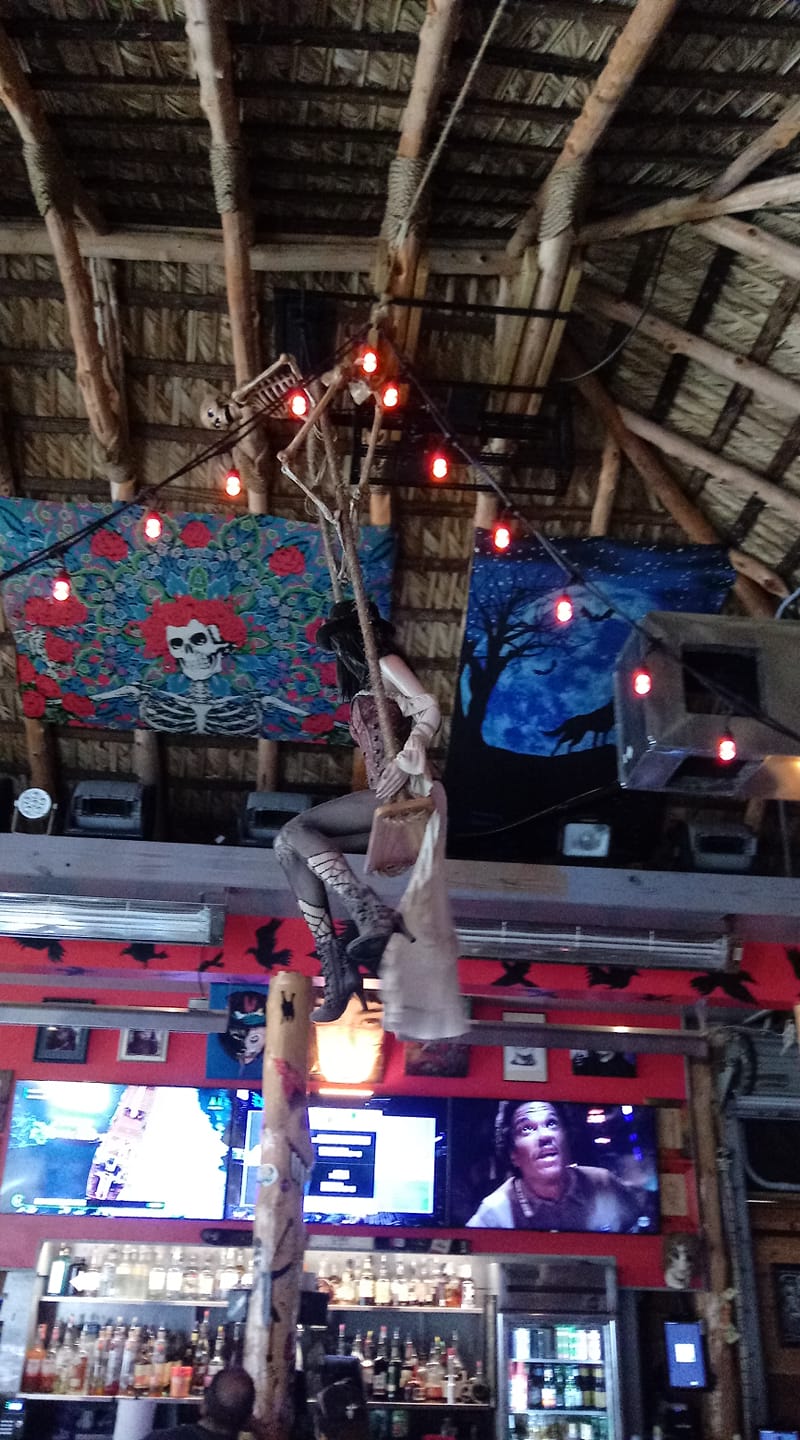 Our super cute server, Mandie, looked like she should be in a movie about this place. She was so perfect in the environment that I wanted to get a pic of her, but that would be weird so I didn't.

This morning is errand running because I need an oil change and to hit the grocery store, but this afternoon we'll head out and explore. We were both exhausted last night so we went to bed at 9pm, which means I was up at 3am ready to start my day and Monello wasn't far behind me.

PREMO Member
We just got back from a grocery store run. They have an H.E.B. close by. We are no longer in a part of Texas that is Hispanic centric. The grocery store didn't have the aisles of dried chilies and other foods preferred by Mexicans. The store also had a lot more upscale products. The butcher section has 4 waygu beef options. No way they'd attempt to sell that in Port Isabel, TX.

League City, where we shopped, is rated as the 8th best place to live in Texas. The article is from 2016. The city shows well. Every neighborhood looked very nice. We were wondering where the run down parts of the town were. Most of the housing looks to be less than 20 years old. There are tons of upscale apartment complexes. It's not Naples Florida, which is a plus. There is a Buc-ees but it's not 1 of the giant 1s we run into around New Braunfels. The population is over 100,000 for the city. 76% of the people there own their home.

Our campground is nice. The sites are probably as tight as any place we have ever stayed. Not all the sites have a picnic table. There are over 270 sites plus a few tiny homes. 2 pool and right on a lake that is brackish water. A lot of kids ride their bikes around. I can walk to the convenience store out the front gate. At our last campground, we went in the hot tub 1 evening. Vrai left her swimsuit and beach towel outside to dry. The next morning both were gone. That is the first time we are aware that anyone has stolen anything from our site. I guess a critter could have come by and taken off with them, but it's highly unlikely. The campground owner said a while back 1 person had their sewer hose stolen. I did lock our surge suppressor when I got here. I use to lock it all the time then got out of the habit.

We had to skirt Houston traffic to get here. I've been spoiled by having nice leisurely drives in sparsely populated areas of Texas. Even New Braunfels being north of San Antonio isn't a bad area to drive in. Leaving here I'll be on secondary roads for 25 miles then take I10 the rest of the way.

This area of Texas is chock full of things to do. There are a lot of marina and boat related businesses. I'm sure our week here will fly by.

Monello said:
We were wondering where the run down parts of the town were.
Click to expand...

They are usually found on the east side of town.

Monello said:
Vrai left her swimsuit and beach towel outside to dry. The next morning both were gone.
Click to expand...

This is the dumbest thing. Out of everything we had out there that they could have nabbed, they took a swimsuit and towel.

And it wasn't even a good suit, just a crappy Walmart one that I got as a backup.

vraiblonde said:
This is the dumbest thing. Out of everything we had out there that they could have nabbed, they took a swimsuit and towel.

And it wasn't even a good suit, just a crappy Walmart one that I got as a backup.
Click to expand...

I wonder if it was maybe a test to see if you would notice if it was missing or not. To see if they can get away with stealing bigger items

snowygirl said:
I wonder if it was maybe a test to see if you would notice if it was missing or not. To see if they can get away with stealing bigger items
Click to expand...

Maybe. But I noticed it was gone the day we left, so the joke's on them.

PREMO Member
Patron
Today we went to Galveston because I needed to get Bananas Foster coffee at this roastery in the Strand. I've been thinking about it for four years, since we were here last time. The Strand is their historic downtown area with all the cute shops and restaurants.

Coming back we went to Crazy Alan's for lunch. This is a Crawfish Pistolette, which is a yeast roll stuffed with etouffee: The plate was prettier when they brought it but we both ate one before I remembered to take a pic. Anyway, it was REALLY good.

Then we took a lookyloo through Clear Lake shores, which is a waterfront town next to Kemah. Super pretty, it reminded me of Piney Point with all the great houses along Lighthouse Road.

This is a nice area. Tons of jobs, the cost of living is reasonable, and there's plenty to do. Great to visit, but highly liveable too.

PREMO Member
Patron
We had so much fun tonight! Went to the Boardwalk because I thought I wanted to ride the rollercoaster, but the line was long and I found I didn't care that much. So we got a daiquiri and walked around for awhile, then went to Tookie's for dinner. Monello had a chicken sam and I had a hot dog.

Then we went to Oakie's for drinks and sat in the courtyard by the firepit. I met this girl in the restroom and admired her coat, and it turned out she was sitting next to us at the pit. So we chatted with her and met her friends. She's a nurse looking for a change, and of course we told her about all the traveling medical professionals we've met.

If we change just one life through preaching the gospel of travel and adventure, I'll feel my life meant something.