PREMO Member
Patron
Damn! We're in a dead zone. My phone has 1-2 bars. The internet is sketchy. The cable bugged out last year because Cox didn't think it was worth it for 30 subscribers.

WHAT FRESH HELL IS THIS????

We got in around 4pm and set up. The crazy old people across from us have a new dog who hates them and ran away, so I helped chase him down, Then they let him out again and last I saw he's running around the RV park. If he were a cuter dog I'd just grab him and he could be Apollo's new brother, but he's one of those minpins and (no offense to you minpin owners) he looks like something you'd scream at and flush.

We went to dinner at The Depot/Johnny Ringo's. The Depot is the restaurant part and Johnny Ringo's is the bar. Chicken Caesar salad for Monello, bar pizza with sausage and jalapenos for me. And beer.

Tombstone looks like a movie set, with westerny buildings that are mostly saloons, and the street is roped off because of spontaneous gunfights. I mean, they're fake gunfights, but still. I'll take lots of pics. It's pretty cool and absolutely a tourist town.

Our RV park is cute and rustic, nothing fancy but it's kitschy and cool in a Tombstone kind of way, and the owners seem nice. What I love but also stresses me is that when we go somewhere new we never know what it's really going to be. I research before I book, but reviewers lie and many are overly optimistic. Corpus Christi comes to mind. But that's the (stressful) fun of it: you never know what you're gonna get til you get there. Our place in Las Cruces was AMAZING! as was LC itself, so it was going to be hard to top that anyway.

Have I mentioned that the nearest grocery store is 15 miles away? There is a thing in Tombstone called Apache Market, which is billed as a grocery store with fresh produce, etc. When we found it we didn't realize that was it because, well, it's really a dingy convenience store. The lady there was nice, but this is not going to be our grocery store and, on the advice of our bartender (because bartenders know everything) we will be supplying ourselves in Sierra Vista 15 miles away. The good news is that there's a Circle K 2 miles from us that carries my e-cig brand.

The drive here was surreal and somewhat disorienting. The mountains are like - gasp. It's big, like it was in Cody, with big sky and big mountains and big landscape. You just feel so small.

We're here a month and that might have been a mistake, but people live here so I'm sure we can too. I'm cautiously optimistic.

vraiblonde said:
We're in a dead zone. My phone has 1-2 bars.
Click to expand...

Given your travel I am surprised you haven't invested into a cell signal booster for the RV.

Ken King said:
Given your travel I am surprised you haven't invested into a cell signal booster for the RV.
Click to expand...

That would cut into the microbrew beer fund.

Monello said:
That would cut into the microbrew beer fund.
Click to expand...

Could be a business expense for the woman, right?

Monello said:
That would cut into the microbrew beer fund.
Click to expand...

Dial-up it is then.

Ken King said:
Given your travel I am surprised you haven't invested into a cell signal booster for the RV.
Click to expand...

This is the first place, besides Monello's sister's lake house, where I haven't had a strong signal. And it's enough for calls and texts, I just won't be able to play my Diamond Digger game.

Our RV park has a corral with a donkey, a horse, and a pony. They are so cute!

PREMO Member
No daylight saving time here. Sunrise is at 5:41 am.

vraiblonde said:
a corral with a donkey, a horse, and a pony
Click to expand...

PREMO Member
The drive down route I 10 is amazing. New Mexico is as dry as the crust on a Ledo's pizza. As you near the border with Arizona we gained some elevation. Going over the mountain pass we were greeted by a very unusual rock formation. Huge boulders and hundreds of them.

Once you get into Arizona the dry and dust gives way to more green and trees. Not sure as it's still pretty much desert. Even here in Tombstone there are trees. Not huge forests of trees but enough to give you some shade.

I'll have to research the pass we drove through when we went into the boulder forest. Now I wish I could have stopped and taken some pictures. On drive day I'm all about getting the miles out of the way so I can arrive at my final destination and get set up. Yesterday's run was 240 miles. That's about the end of my 1 day comfort drive. Any longer of a drive and it feels like a day in the office.

PREMO Member
Patron
Today we trekked to Sierra Vista for groceries. SV is a proper small city with 50k+- residents. On the way we hit the Tombstone Visitor's Center and got a peek at the goings on downtown. I can't wait to go back with my camera! There were cowboys (actors/renactors) milling about, howdying to the tourists and generally being quaint.

What's cool is that we are three hours behind MD. What that means is that I'm up at 4am to start my work day, BUT when I get off work it's like 2pm so I have several hours to go play before sunset.

The pollen here is killing me, though. I didn't think AZ & NM were polleny because it's dry, but everything is yellow and there are chunks of pollen laying all over the place. I've had to take a Zyrtec-D every morning just to feel human.

PREMO Member
Patron
Today we went for a swim and were going to do pork belly tacos for dinner, but then we went in search of shredded cabbage and of course....Tombstone. So we bagged it and had a drink at Tombstone Brewery, and then went downtown to Big Nose Kate's for dinner. Pastrami sandwich for me, big ass calzone for Monello.

Big Nose Kate's is touristy and kitschy, with a bordello saloon theme and waitresses dressed to match. The food was good, as was the beer. I normally would snub an obvious tourist place because they usually suck, but Kate's was pretty good.

I have to say I love a tourist trap. They're so interesting and entertaining. Usually the food at highly touted places isn't very good (Kate's being the exception) but they make up for it in pure atmosphere.

Again, I would like to know the effects y’all are experiencing with the overflow of illegals. Thanks.

littlelady said:
Again, I would like to know the effects y’all are experiencing with the overflow of illegals. Thanks.
Click to expand...

As close as we are to the border, there doesn't seem to be a huge amount of hispanics here. El Paso has a greater percentage compared to here. You do see border patrol vehicles on the roads around here.

Looking at the scrub land, I couldn't imagine someone walking 10 miles through that stuff. It would shred your clothes into rags after a few steps.

Monello said:
As close as we are to the border, there doesn't seem to be a huge amount of hispanics here. El Paso has a greater percentage compared to here. You do see border patrol vehicles on the roads around here.

Looking at the scrub land, I couldn't imagine someone walking 10 miles through that stuff. It would shred your clothes into rags after a few steps.
Click to expand...

PREMO Member
This was 1 of the better weekends I(we) have had since we are on the road. Saturday was spent touring the town of Bisbee. We spent a lot of time rolling around historic Bisbee, Bisbee, Warren and Lowell. First stop was to the farmer's market, then we headed back north. Vrai spotted a place that looked interesing. We stopped in Lowell which has been incorporated into Bisbee. 1 street has a few dozen vintage cars and other historic vehicles on it.

We strolled around historic Bisbee. It's a tourist destination. Lots of shopping for stuff like cakes and soap. We had lunch at the stock exchange that at 1 time served as the only stock exchange in Arizona. They still have the chalk board on the wall where they listed the stock prices.

Today Tombstone had vigilante reenactment skits on the streets. They were touristy corny. But there was no shortage of peole watching the show. Lots of blackpowder guns going off. This is 1 of the friendlies places we have been. They understand the tourists pay the bills so they go out of there way to accomodate the visitors.
L

PREMO Member
Shop at the commissary at Ft Huachuca. Also, if you get up Phoenix way, in Queen Creek there is an excellent restaurant/bar/saloon named San Tan Flat. https://www.santanflat.com/ You can order or cook your own on the outdoor wood fired grills while listening to live music from the stage. The interior is decorated with old west stuff and numerous handmade signs with conservative slants such as "John Galt drinks here".

PREMO Member
This is in the cellar of Big Nose Kate's Saloon. It was the place where the caretaker rested his head at night. He also tunneled down to where the silver is. If he did find any silver they say it was never located and may still be hidden somewhere nearby. 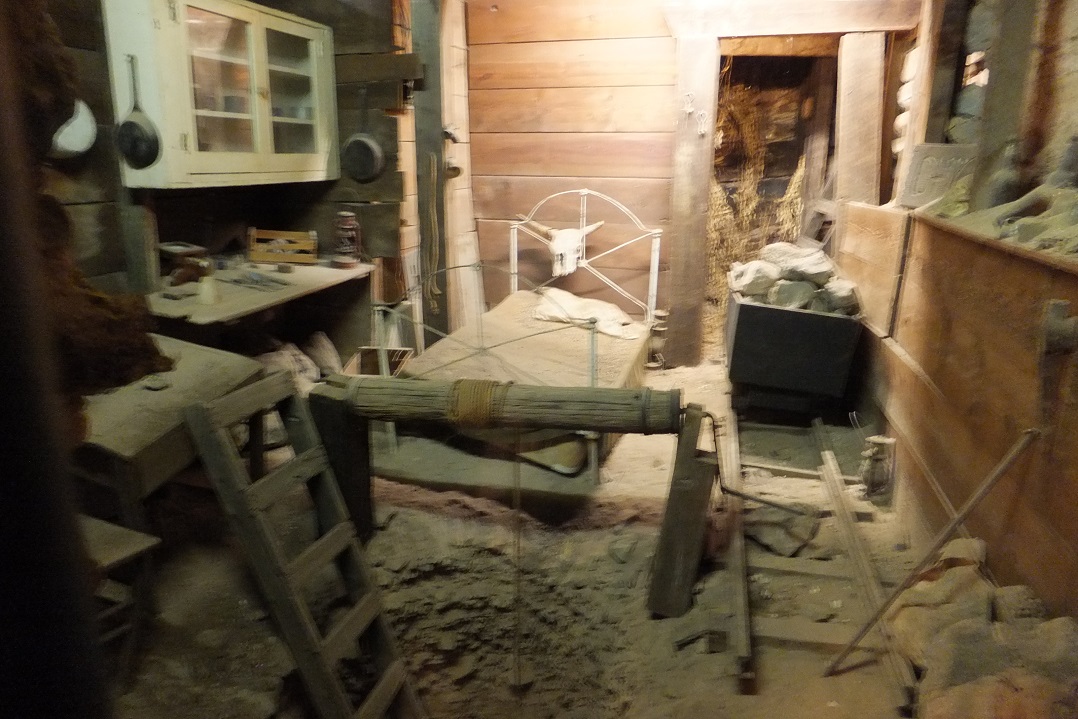 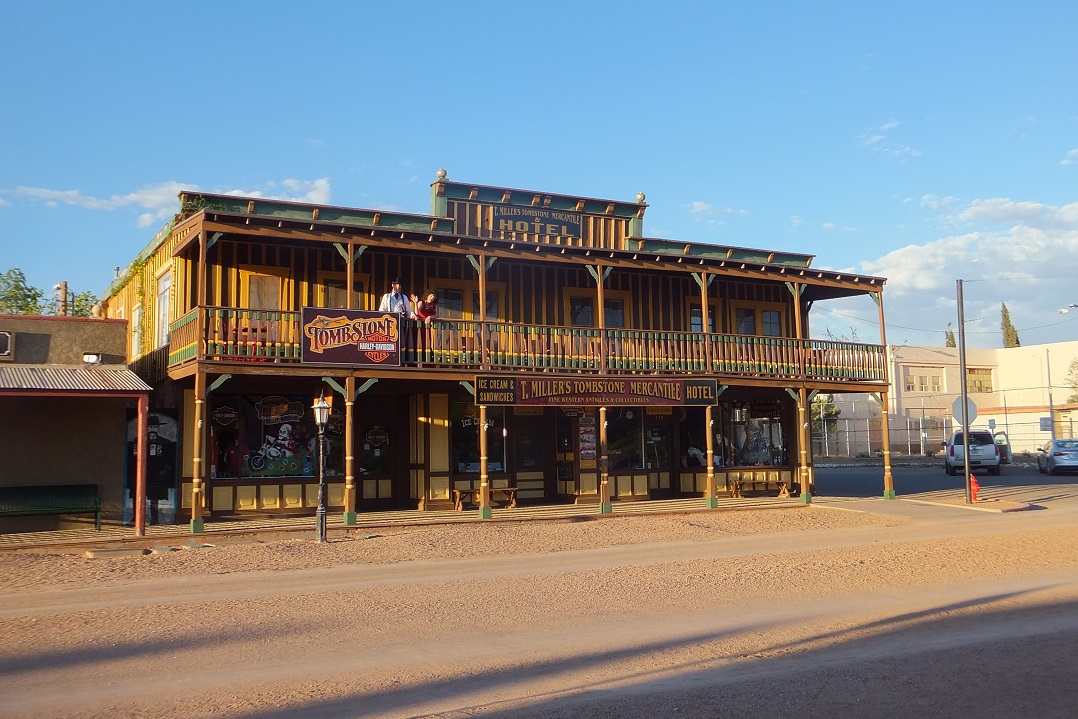 1 of the many tourist traps in the town 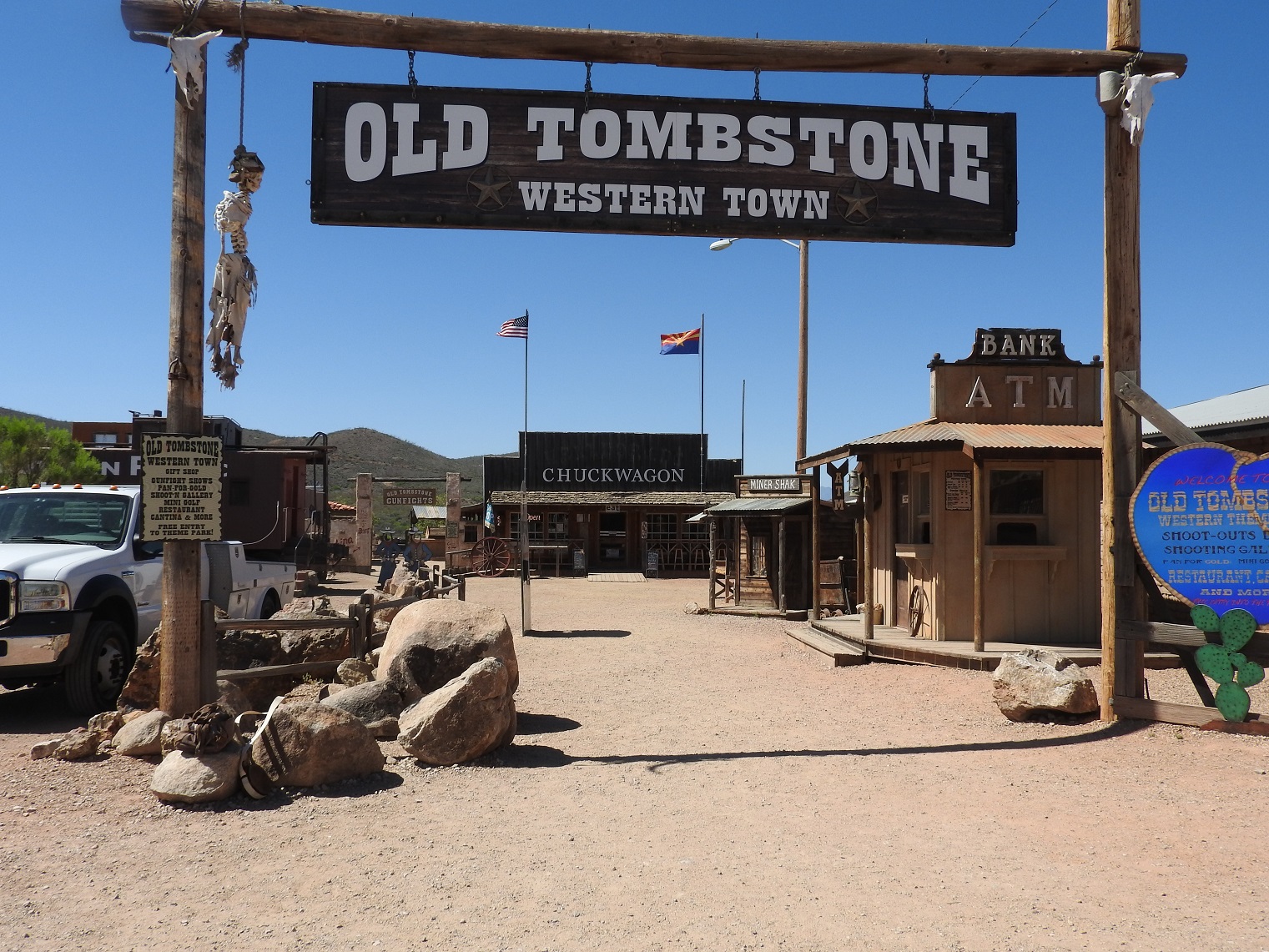 When historic and modern clash. Note first person of the right in period clothing 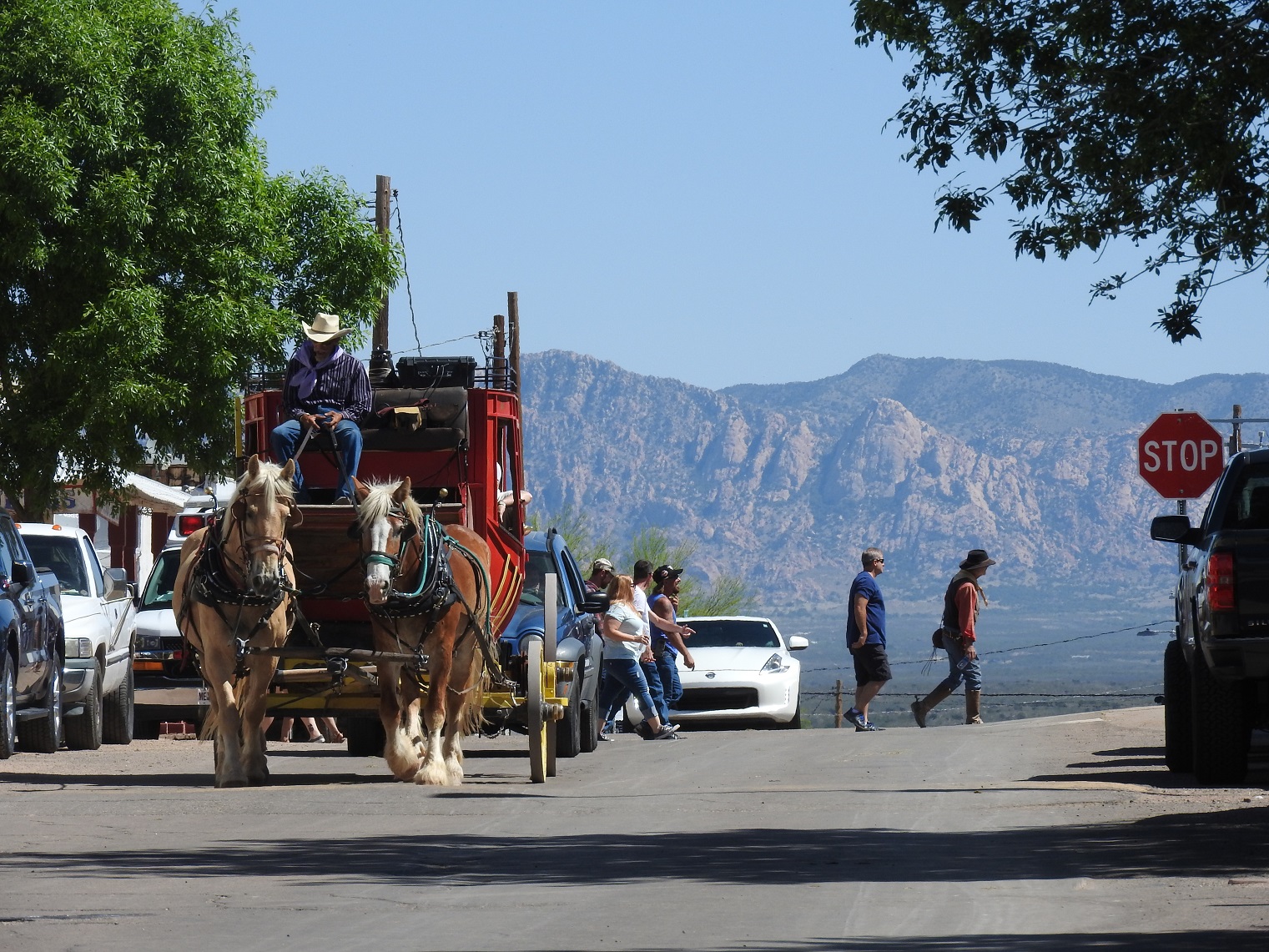 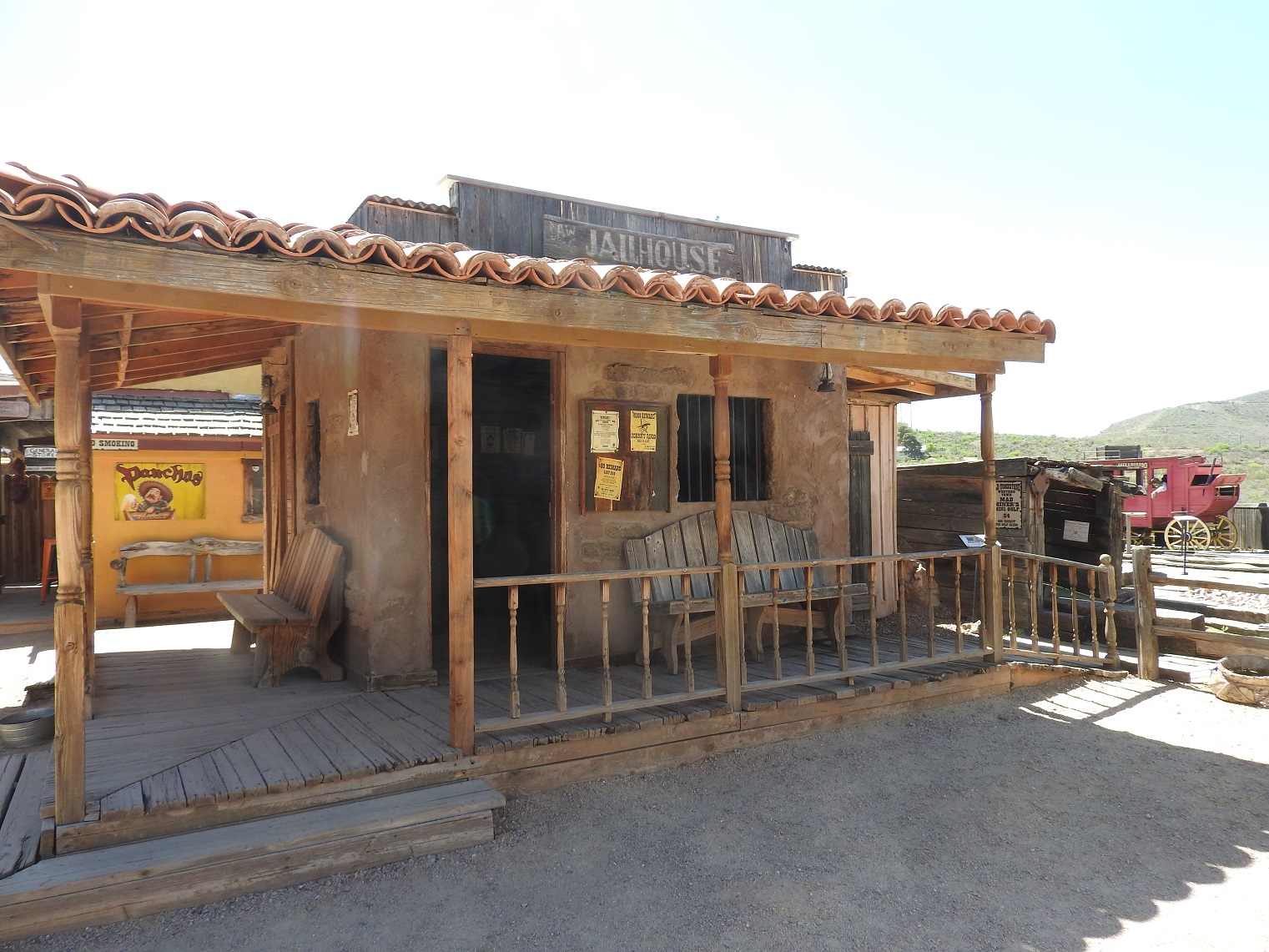 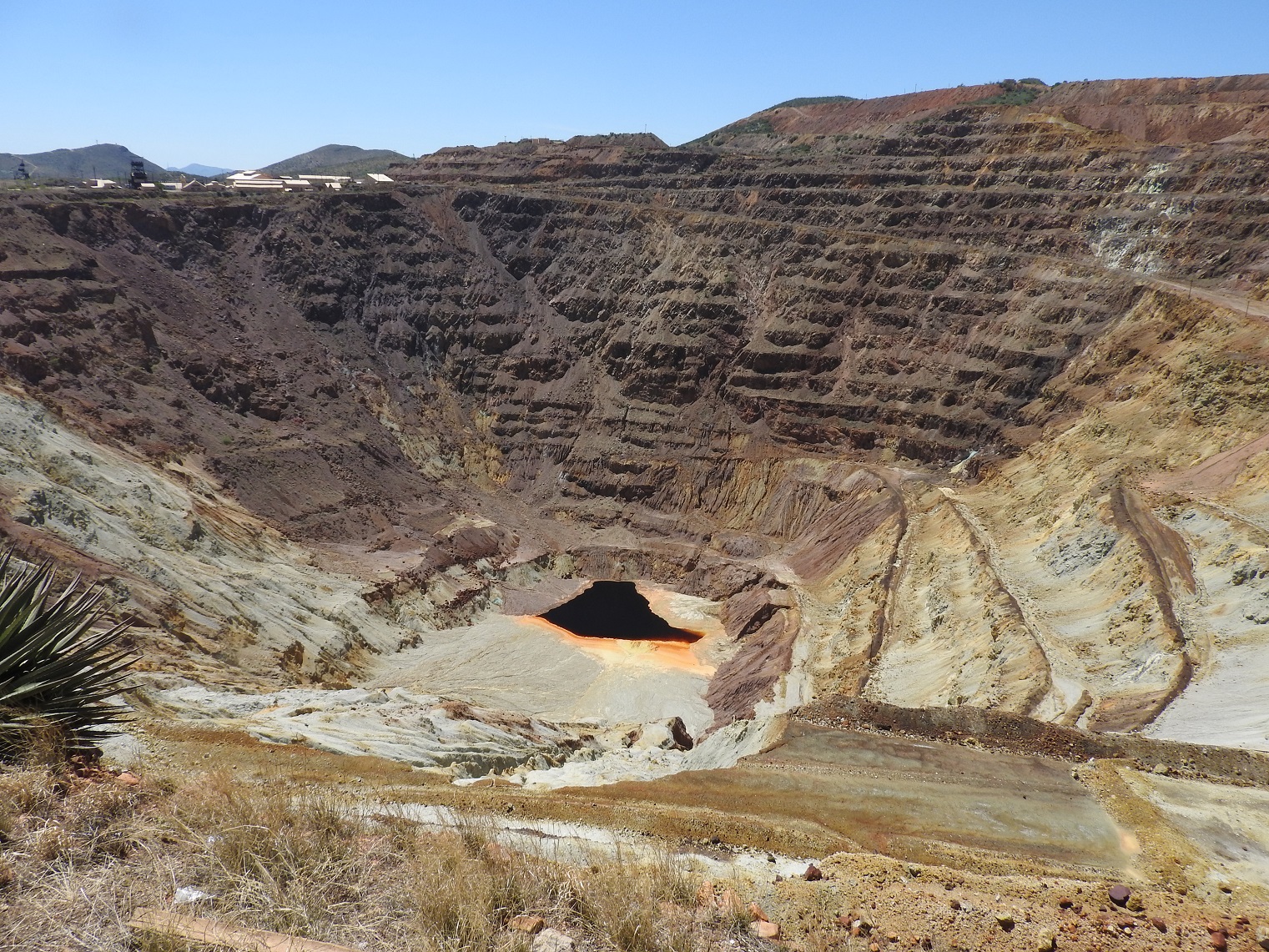 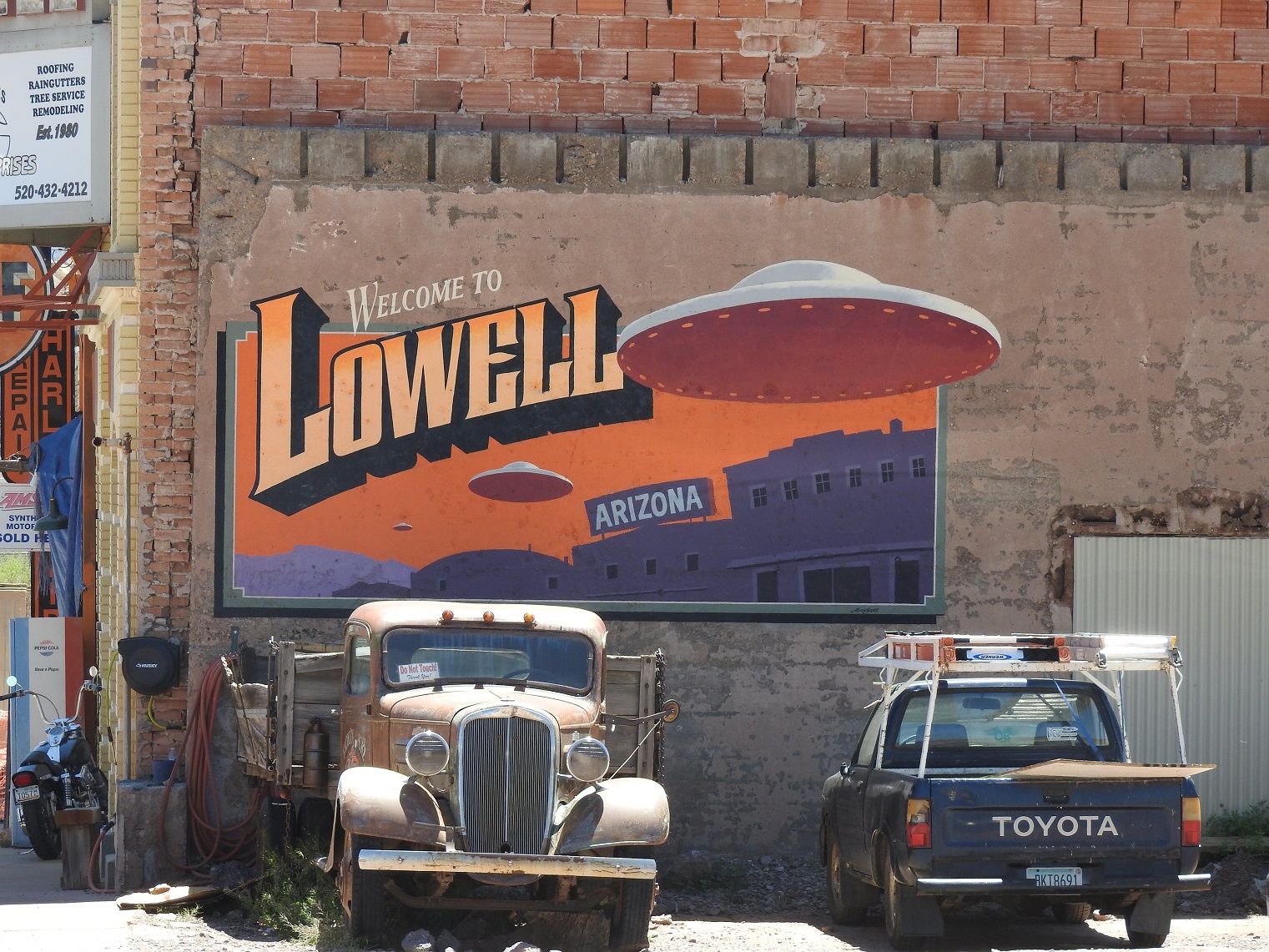 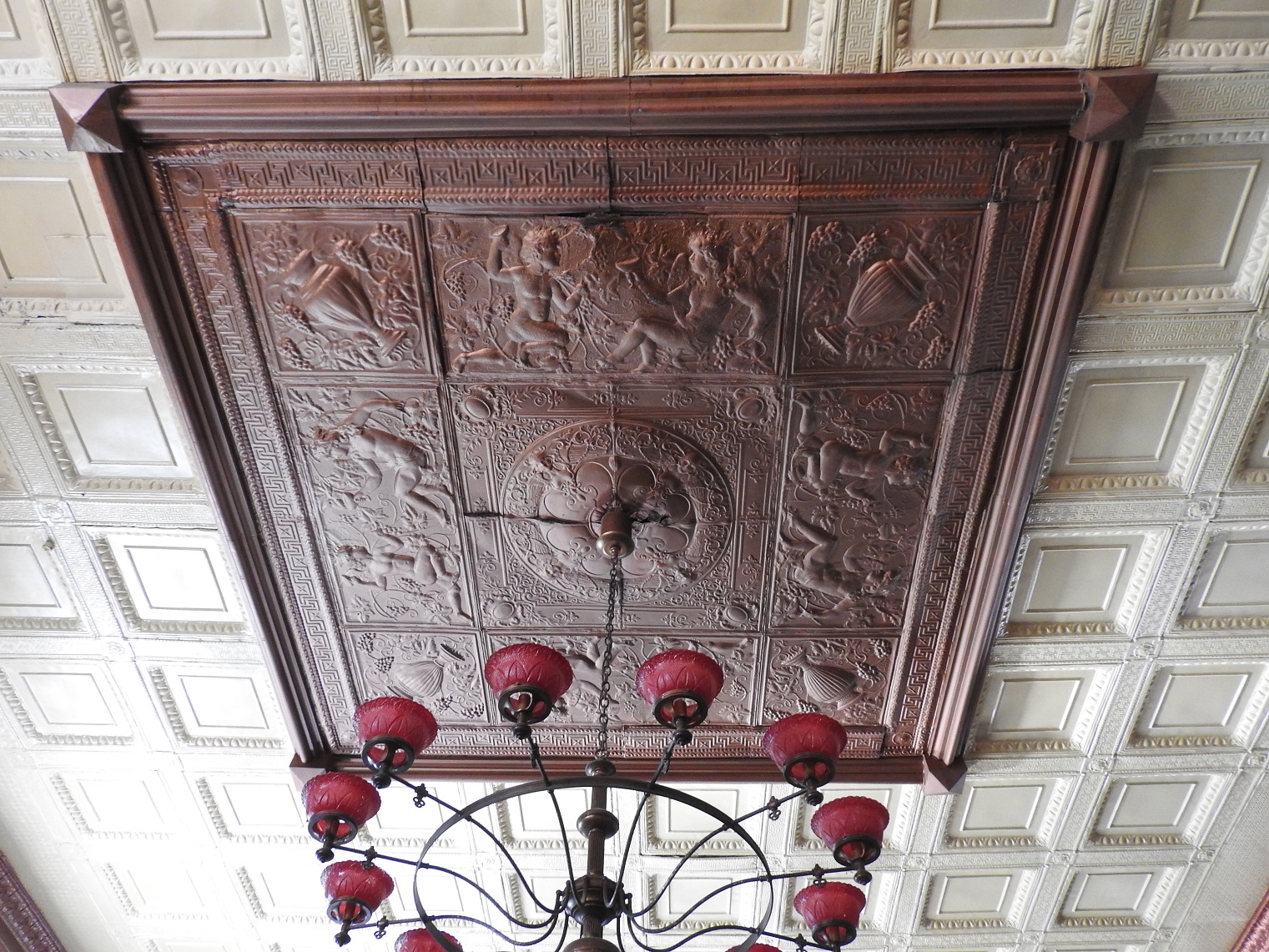 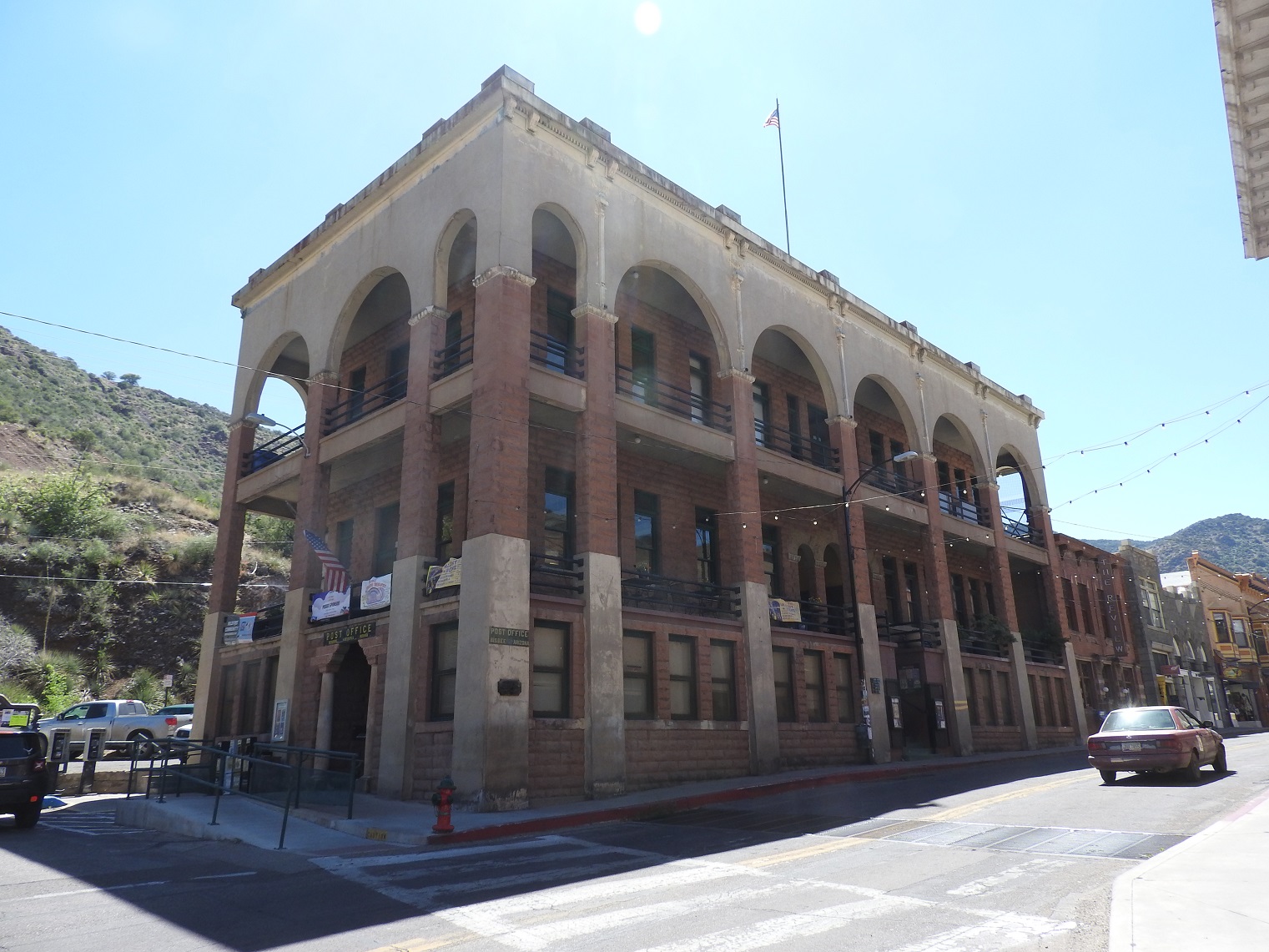 Bisbee as seen from the road going into town 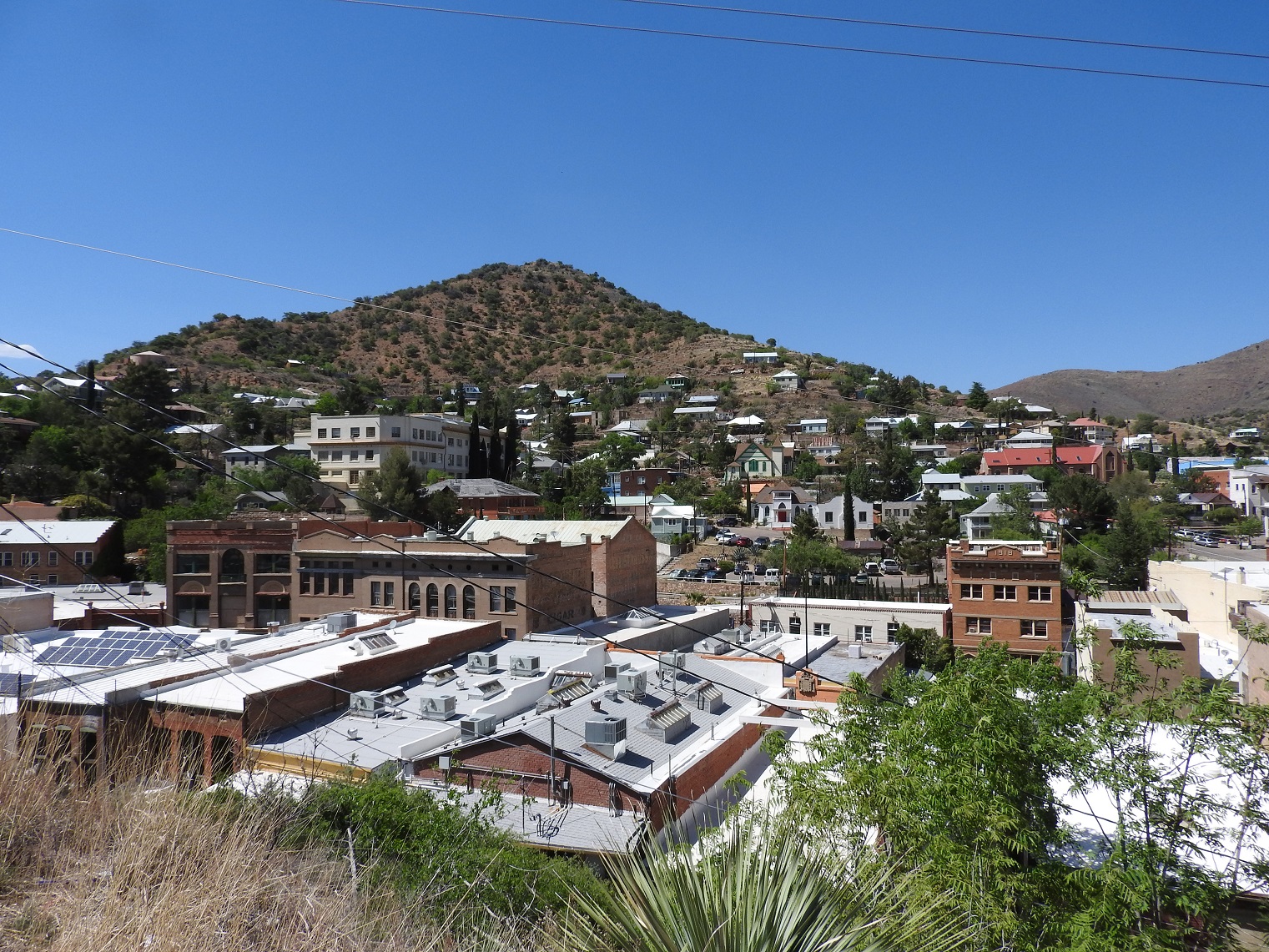 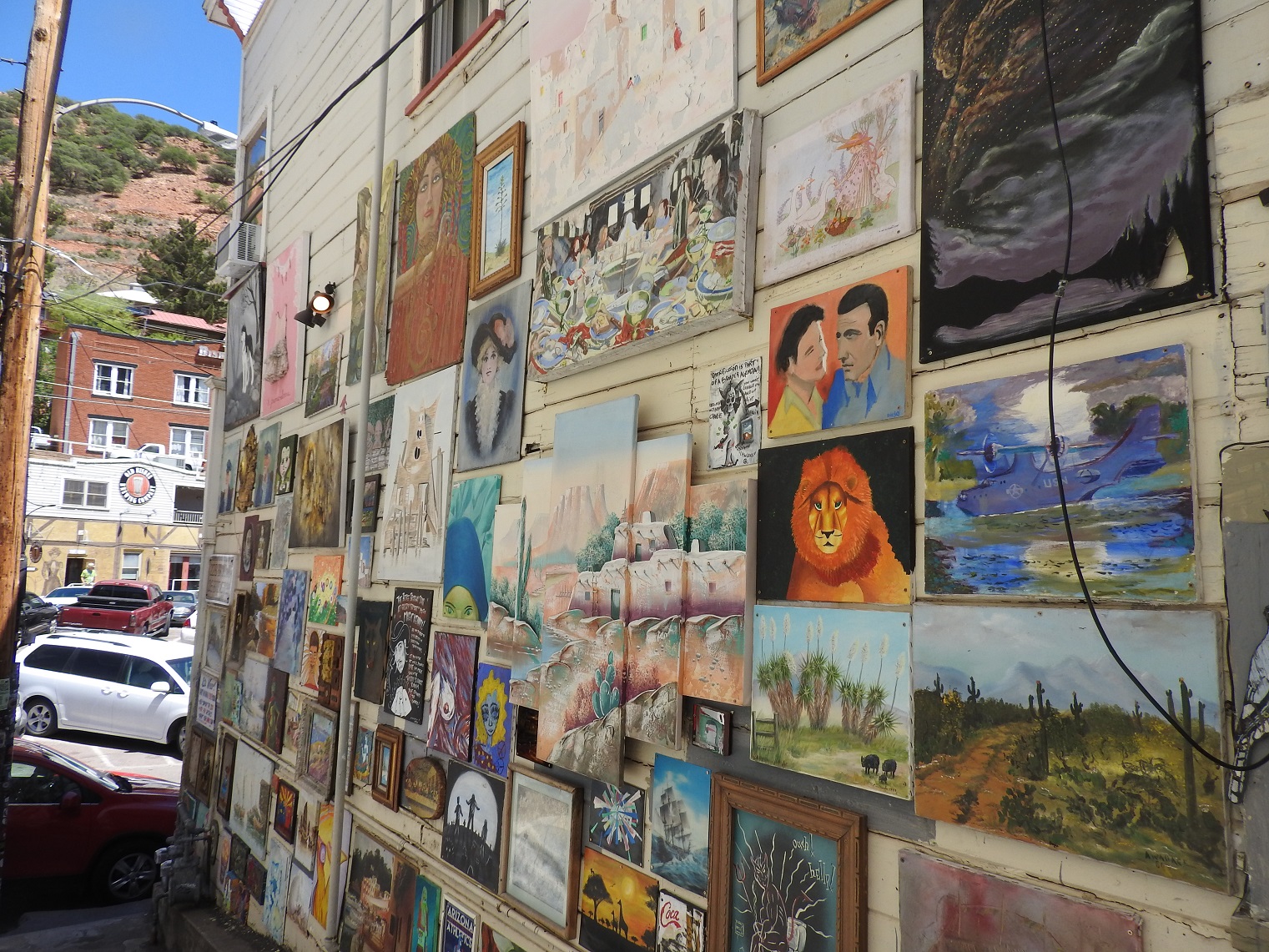 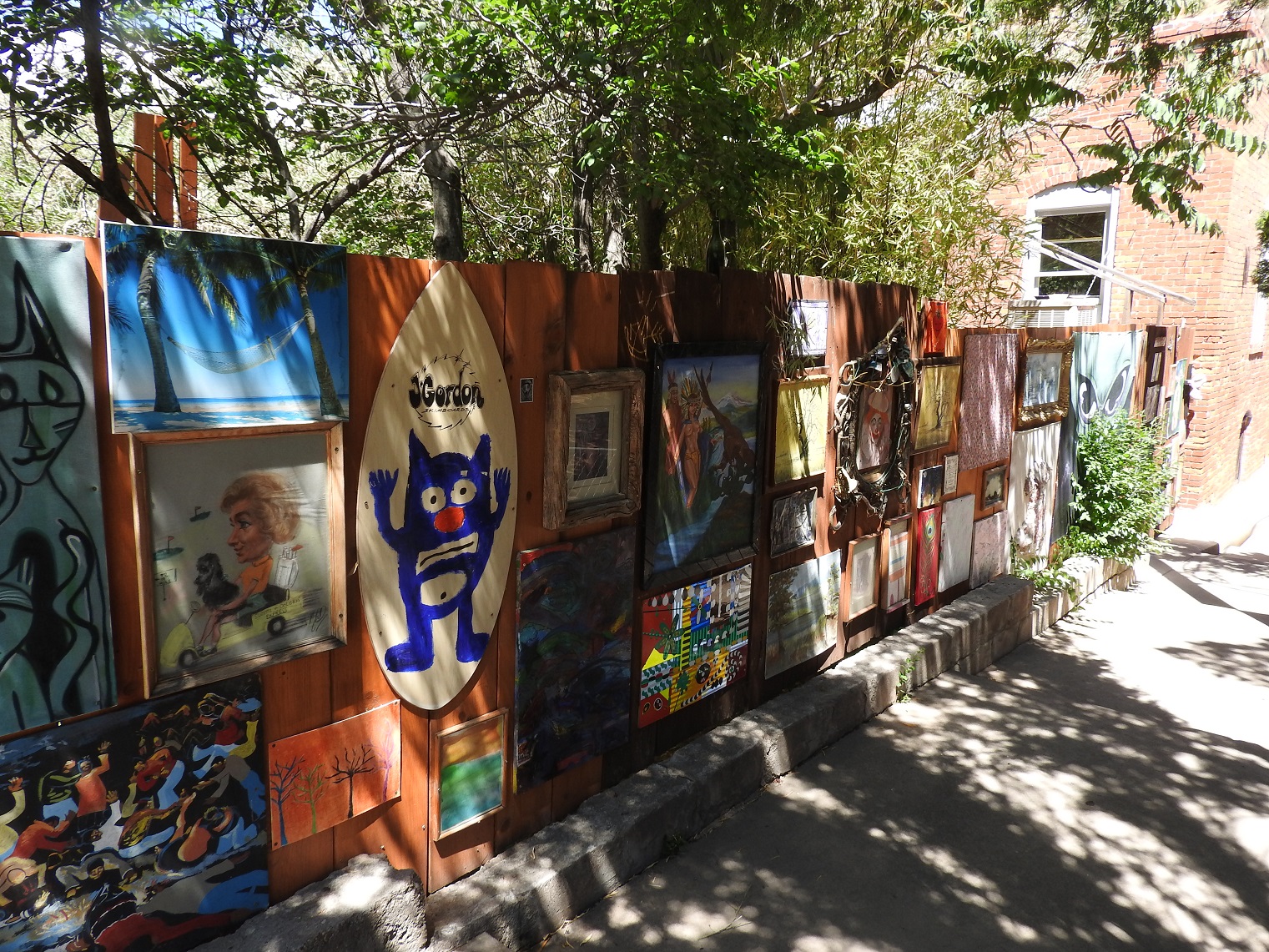 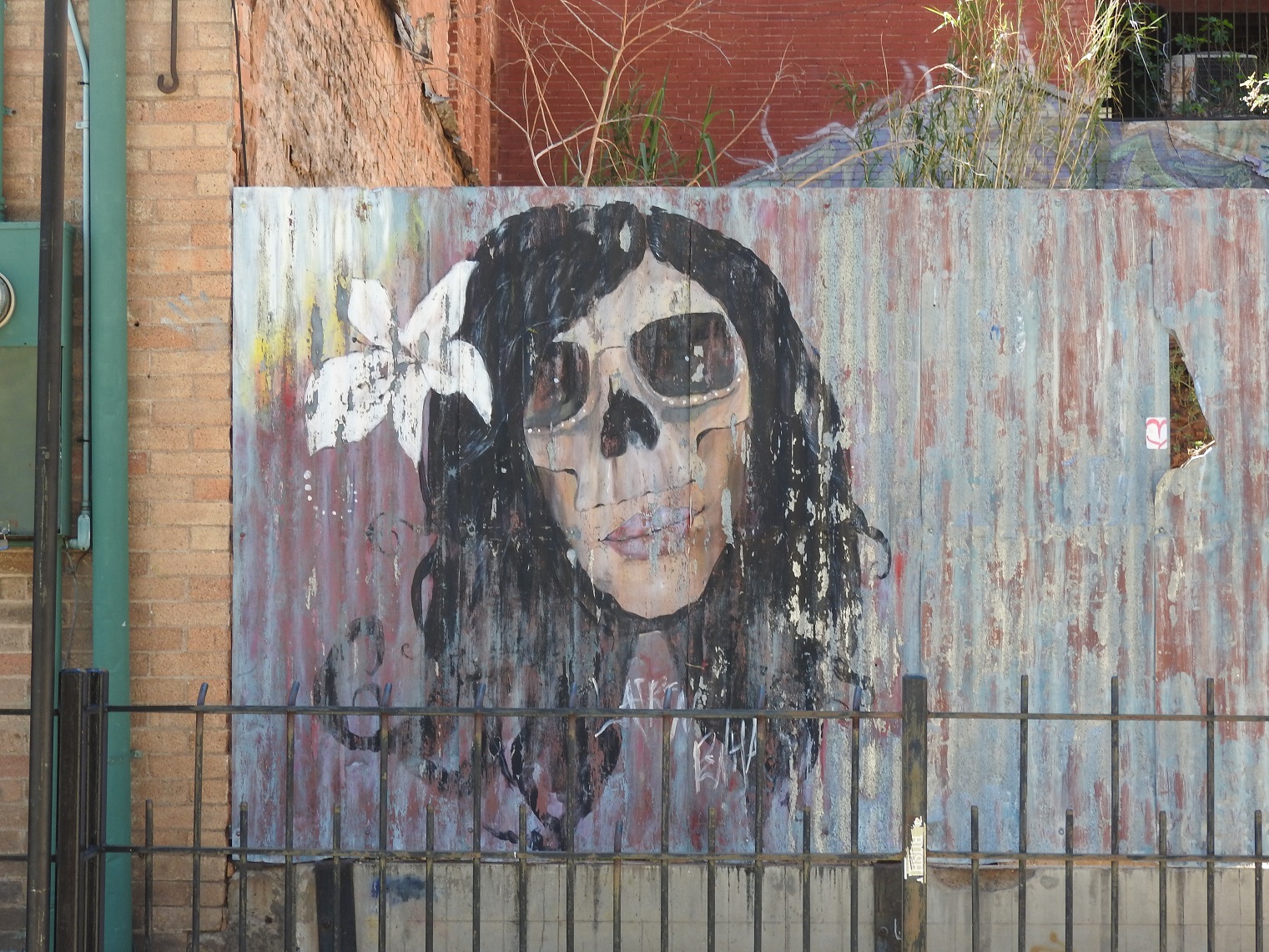 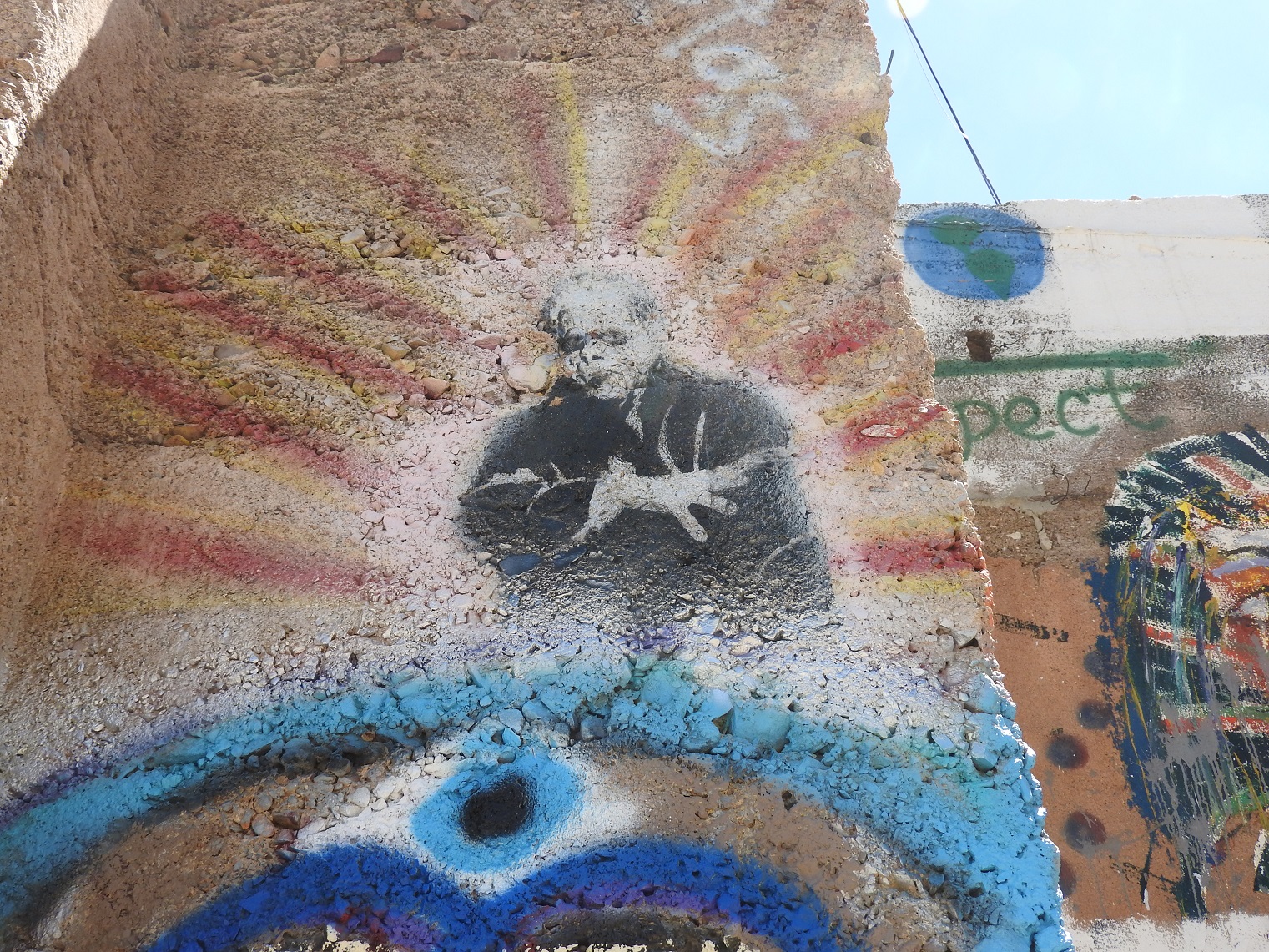 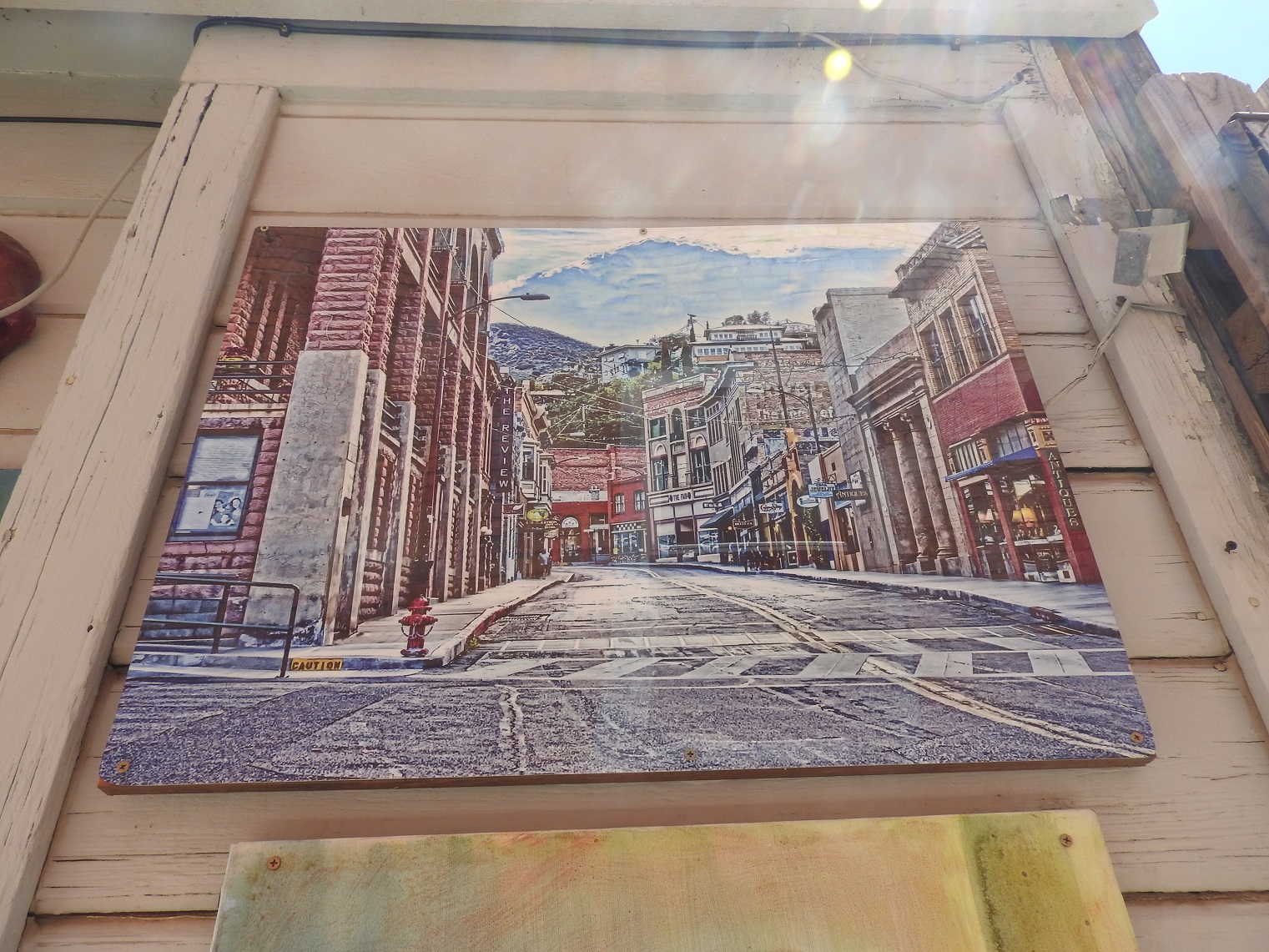 PREMO Member
Patron
This is really a cool area. Wild Westy and kitschy in a good way.

Saturday Tombstone was hosting the Cardinals draft picks, so there was a big party downtown. We stayed for a little while then headed to Bisbee for the farmers market and just to roam around. Bisbee is a hippie artsy enclave and I'm guessing no MAGA hats allowed.

It is almost the opposite of Tombstone, where men are men and so are the women.

Sunday we went back downtown for Vigilante Sunday, which they do once a month. In addition to the normal Tombstone wild west, there are skits and gunfights in the streets, and proceeds to toward something. We drank beer on the porch at Four Deuces and chatted with the locals. One guy was chewing and he said, "Is this going to bother you?" I replied, "I'm from Nebraska." He said, "Oh, good" and proceeded to spit in the little trash can provided for such activity.

It's very casual here, unless you want to get dolled up in period clothing (which a lot of people do). We haven't done any of the major attractions yet - just walked around and took in the atmosphere. But I'd like to see the comedy gunfight show, and do the trolley tour. And ride on the stagecoach. They have museums galore here, from the OK Corral to Wyatt Earp's house to Boot Hill, so we'll be plenty busy.
You must log in or register to reply here.
Share:
Facebook Twitter Reddit Pinterest Tumblr WhatsApp Email Link
Top