I need a nap

PREMO Member
Thank you! We are in New Yawk Citty and havin' a good time. Walking our butts off.

Lower Manhattan today and mid-upper Manhattan tomorrow. On the subway our way now to a recommended by one of Foxhound's friends NY Delicatessen (Katz) for some dinner!

Sounds like you're having a great time. Happy Birthday.

PREMO Member
Happy birthday Bann, may you have many more!

PREMO Member
Holy Pastrami, Batman! That deli is awesome! They move fast fast in there and you gotta know what you want pretty fast, too. Like in Philly. Although, they were nicer in Katz' Deli than those Philly cheese steak people in Philly.

So much food! The pickles come with whatever you ordered. I don't eat a lot of pickles specifically because of the salt, BUT I did try them. Tasty, and homemade.
View attachment 118376

I had a Reuben (corned beef, not pastrami) on REAL fresh rye bread. Delicious, and not like you get anywhere else!! 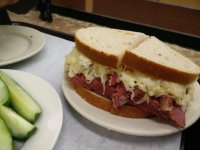 Foxhound got a Tongue sandwich.

(On rye automatically unless you ask for something else) 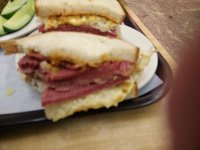 View attachment 118376
Super delicious, but I could only eat half of mine. Not sure why I thought I wanted to have fries -guess to splurge, but they were HUGE steak fries and they gave you a ton of those, too. We didn't (together) eat half the fries or half the pickles. Foxhound was able to finish his whole sandwich, we had my other half wrapped to go. Had to leave the pickles and taters, because we were traveling light as I was definitely walking off that meal. Plus, we had REAL brick oven baked pizza earlier at Eataly. And some Italian chocolates. ...and a glass of vino for me.

...and we stopped back by Eataly on the way to the hotel and had to die for gelato.

PREMO Member
Patron
I am a huge fan of deli pickles - salt be damned.

Glad you're having such a good time!