Isaiah 13:1 A prophecy against Babylon that Isaiah son of Amoz saw:​
​
2 Raise a banner on a bare hilltop,
shout to them;
beckon to them
to enter the gates of the nobles.
3 I have commanded those I prepared for battle;
I have summoned my warriors to carry out my wrath—
those who rejoice in my triumph.​
​
4 Listen, a noise on the mountains,
like that of a great multitude!
Listen, an uproar among the kingdoms,
like nations massing together!
The Lord Almighty is mustering
an army for war.
5 They come from faraway lands,
from the ends of the heavens—
the Lord and the weapons of his wrath—
to destroy the whole country.​
​
6 Wail, for the day of the Lord is near;
it will come like destruction from the Almighty.[a]
7 Because of this, all hands will go limp,
every heart will melt with fear.
8 Terror will seize them,
pain and anguish will grip them;
they will writhe like a woman in labor.
They will look aghast at each other,
their faces aflame.​
​
9 See, the day of the Lord is coming
—a cruel day, with wrath and fierce anger—
to make the land desolate
and destroy the sinners within it.
10 The stars of heaven and their constellations
will not show their light.
The rising sun will be darkened
and the moon will not give its light.
11 I will punish the world for its evil,
the wicked for their sins.
I will put an end to the arrogance of the haughty
and will humble the pride of the ruthless.
12 I will make people scarcer than pure gold,
more rare than the gold of Ophir.
13 Therefore I will make the heavens tremble;
and the earth will shake from its place
at the wrath of the Lord Almighty,
in the day of his burning anger.​
​
14 Like a hunted gazelle,
like sheep without a shepherd,
they will all return to their own people,
they will flee to their native land.
15 Whoever is captured will be thrust through;
all who are caught will fall by the sword.
16 Their infants will be dashed to pieces before their eyes;
their houses will be looted and their wives violated.​
​
17 See, I will stir up against them the Medes,
who do not care for silver
and have no delight in gold.
18 Their bows will strike down the young men;
they will have no mercy on infants,
nor will they look with compassion on children.
19 Babylon, the jewel of kingdoms,
the pride and glory of the Babylonians,[b]
will be overthrown by God
like Sodom and Gomorrah.
20 She will never be inhabited
or lived in through all generations;
there no nomads will pitch their tents,
there no shepherds will rest their flocks.
21 But desert creatures will lie there,
jackals will fill her houses;
there the owls will dwell,
and there the wild goats will leap about.
22 Hyenas will inhabit her strongholds,
jackals her luxurious palaces.
Her time is at hand,
and her days will not be prolonged.​
a. Isaiah 13:6 Hebrew Shaddai
b. Isaiah 13:19 Or Chaldeans

OK... so God is going to overthrow Babylon as He did Sodom and Gomorrah. Where is this place so I can avoid it?!?

According to verse 17.... God's going to use the Medes to put the Babylonians in their place. So this is from Bible.org.


The history of the rise and fall of the Medes and the Persians forms an important background for over two hundred years of Biblical history. Located in the area south of the Caspian Sea and east of the Zagros Mountains, its original domain stretched for 600 miles north and south, and 250 miles east to west. The nation first came into prominence in the ninth century b.c. and is mentioned in inscriptions concerning Shalmaneser III (about 836 b.c. ). Though under the domination of Assyria until the seventh century b.c., their rise in power was contemporary with the decline of the Assyrian Empire and in 614 b.c. the Medes captured Asshur, the capitol city of Assyria. Later in 612 b.c. in alliance with the Chaldeans they captured Nineveh resulting in the downfall of the Assyrian Empire. In the years which followed they were an important ally of Babylonia and formed various alliances and intermarriages. Toward the end of the reign of Nebuchadnezzar, the Persians began to become a powerful force and under Cyrus II Media was conquered in 549 b.c. and was combined with the empire of the Persians to form Medo-Persia. The combined strength of the Persians and the Medes led to conquest of Babylon in 539 b.c., with the resulting extension of their empire over much of the Middle East until the conquest of Alexander the Great in 331 b.c. ​
​
This is from bible-studys.org.


This section of Isaiah’s prophecy concerns the message of God’s judgment against Israel’s neighbors. The prophet’s message of judgment begins with the word burden (masa), which may also be rendered “oracle.” The fact that Isaiah did see these events indicates that he saw then in a vision as though they were actually happening.​
​
The prophet’s first message was delivered against Babylon, the very nation that would eventually carry Judah into captivity. Sanctified ones and mighty ones are the armies of Medo-Persia, which God will raise up against Babylon to fulfill His purpose.​
​
The violence really begins in verse 13. This is from the easy English site.


This is how poetry describes dramatic (impressive or terrible) events. We can imagine that the earth is trembling. It does that during an earthquake. But it is hard to imagine that the heavens will shake! We may wonder whether ‘heavens’ means the sky or God’s home. Probably it means the sky with the sun, the moon, and all the stars. There is similar language in Psalm 18:7 and 2 Samuel 22:8. Again, there may be a meaning that we do not yet understand. It may have a connection with the time when Jesus returns to the Earth.​
​
A ‘deer’ (plural also ‘deer’) is a wild animal. It is like a small cow, but it is more graceful. It runs fast when hunters chase it. The people in Babylon (verse 19) will run when the soldiers from Media (verse 17) chase them. When sheep have nobody to lead them, they soon lose their way.​
​
The Hebrew words for ‘kill with a sharp knife’ are very dramatic. They mean ‘run through with a sword’. That means to push a knife or a sword into somebody, so that it goes through them. So they die. The foreign army will be the army from Media in verse 17.​
​
As the people in Babylon watch, Media’s soldiers will hit their children with rocks. At that time, it was quite usual for soldiers to kill their enemies’ small children in that way. It meant that those children would not grow up to become soldiers. And therefore they would not be able to fight against the soldiers from Media! Psalm 137:9 repeats Isaiah’s prophecy about the children. Media’s soldiers will also rob the people in Babylon. And Media’s soldiers will have sex with the people’s wives, although the wives do not want it. That is a very cruel thing to do.​
​
The foreign army was acting as God’s tool to punish Babylon’s people. He was using that army to defeat them. So God had to attract the foreign soldiers to carry out that task! And they cared more about the battle than they cared about silver or gold. We do not know how God persuaded them to fight. But the answer may be in the note about verse 3! Media was a country that was east from Babylon. There is a note about the army from Media below. It is below the note about verses 21-22.​
​
The young men were probably the young soldiers in Babylon. It was the arrows from the bows that actually killed people. It was not the bows themselves. The soldiers from Media were so cruel that they killed babies and children.​
​
We read how God destroyed Sodom and Gomorrah in Genesis 19:23-29. People from other kingdoms (countries that a king rules) think that Babylon is beautiful. And the people from Chaldea (Babylon) themselves are proud of their city. But God will destroy Babylon, although those things are true. ‘Chaldea’ is another name for Babylon.​
​
The army from Media will destroy Babylon so completely that nobody will ever live there again. ‘Its children’ are the children, grandchildren and so on, of the people that live in Babylon. No visitor will put a tent there and no shepherd (person that looks after sheep) will take his sheep there. Babylon will be a city that Media’s army has ruined.​
​
Only wild birds and animals will be in Babylon. Bible students are not sure what some birds and animals here are. This translation contains some ideas that they have. An ‘owl’ is a bird that finds its food at night. Some owls make a loud scream that often frightens people. An ostrich is a huge bird with long legs. It cannot fly. The animals called hyenas and jackals kill other animals and then they eat them.​
​
The Chaldeans were in modern day Iraq. The Persians.... were in modern day Iran. This happened.... about 500 years before Jesus arrived.

IMHO.... People talk about how cruel God is. Check out how cruel humans are. Of course God can be cruel when He needs to be.... He wouldn't create something He couldn't control. Humans are cruel! 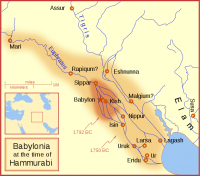