Monello said:
I don't keep up with private health insurance because I use the VA & tricare. But who is paying over $800 a month for health insurance? > $10,000 annual!!!! That's almost a mortgage payment. It is way more than my first mortgage monthly payments. No wonder young people aren't paying off their student loans. After paying for health insurance and other monthly bills, there isn't much money left over.
Click to expand...

PREMO Member
“But what the president did last night was incredibly powerful. It was clear. It was concise. It was steadfast, which is — and he did it prime time, as you all know, to the American people, speaking directly to them, that this is a time for us to come together,” Jean-Pierre spewed.

“Right. But what I’m asking is if there’s any action behind his words,” Diamond once again asked.

“Well, the action is making your voices heard. That is a powerful action. We have seen it across time, we have seen it throughout our American history that making your voices heard actually can change — actually can change the direction of a country,” she deflected. “So, I would say that is the most powerful tool that we have as a country right now.”

Later, Diamond would circle back to the question to give it one more go. It didn’t work.

“I’m going to — I’m going to move around. You’ve asked three questions,” she disingenuously said to the reporter.

“Well, you didn’t answer the first question until…” he started.

“I did,” she testily interrupted him.

“No. No, no, no, I answered the first question. You just — you know, I had to just dive in a little bit more, but I certainly answered it because I said, ‘Making your voices heard is a powerful tool.’ I answered it the first time you asked,” she said blowing off the question entirely. “I’m going to go around.” 'No. No, no no.' KJP dismisses journo who asks about Biden's plan of 'action' against MAGA threat

Jean-Pierre shut down CNN reporter Jeremy Diamond who asked what concrete actions Biden intends to take against the MAGA threat to democracy.

Schools Reopening 'Was the Work of Democrats in Spite of Republicans,' Claims White House Press Secretary​

"It shows you how mismanaged the pandemic was," she said, adding herself to the growing list of Democrats who have tried this week to distance their party and themselves from prior support of lockdowns.

Jean-Pierre, of course, neglected to say which party led the charge on shutting schools and the economy down, littering her response with debunkable revisionism. So fact-checkers at major publications hurried to add context to her remarks and correct the record.

Just kidding! Nary a fact-check graced the pages of major publications by Friday morning. Instead, conservative pundits and journalists took to Twitter with screenshots of headlines to remind people which party so fervently opposed school reopening throughout 2020 and much of 2021, even after more information had quickly emerged about COVID risk to kids and other countries' experiments in resuming in-person schooling.

Jean-Pierre's comments attempt to sweep under the rug the anti-reopening lefty consensus that dominated news media for so many months of the pandemic. CNN's Chris Cillizza, for example, wrote about "the very clear dangers of Donald Trump's push to reopen schools" in July 2020. "Trump pushes and threatens in bid to fully reopen schools," wrote The Washington Post's Laura Meckler that same month. It wasn't just that reporters and public health experts had concerns about Trump's disinterest in well-placed COVID mitigation measures; it was that the industry as a whole carried an awful lot of water for the pro-lockdown side while broadly failing to pay attention to the obvious, predictable consequences—learning loss, increased deaths of despair, economic hardship for business owners—that anti-lockdowners had been warning about.

"NPR and other national news outlets were not chock-full of stories about the ways remote learning exacerbated existing inequities," wrote Mary Katharine Ham for Reason last month. "Public radio didn't send warnings in its sonorous tones commensurate with what [reporter Anya] Kamenetz knew was generational damage, hitting poor and minority students hardest. It didn't extensively profile the politically and ethnically diverse coalition of parents who fought for a year to open urban and suburban schools' doors. It didn't press large districts and teachers union leaders about their insistence on staying closed while the rest of the world opened safely."

The White House Admitted That Biden Supporters Are Extremists​

On Friday, the nation was reacting to Joe Biden’s horribly staged, fascistic speech in which he declared millions of Trump voters a threat to democracy and a “clear and present danger” to the nation. But before the speech, White House Press Secretary Karine Jean-Pierre made a disturbing statement that is worthy of unpacking. She claimed that anyone who disagrees with the majority of Americans is an extremist.

“I mean, he was very clear — he was very clear that MAGA Republicans in Congress have an agenda that is extreme. And that’s what you hear from them. The national ban on abortion is extreme. And also, it’s not in line with where a majority of Americans are. It is just not. It is taking away people’s rights. It is taking away people’s freedoms,” Jean-Pierre said. “And, you know, he doesn’t — he believes that is an extreme agenda. You’ve heard that from him directly. I don’t even need to confirm that from here. He’s actually talked about how extreme it is.”
It should be noted that there is no national ban on abortion—the issue of abortion rights was merely sent back to the states to regulate. And according to a poll taken after the Dobbs decision was released, a plurality of voters say they most trust their governor and state legislature to decide the laws governing abortion while only 18% of American voters say they most trust the federal government to decide laws governing abortion.

So, it looks like Biden is the extremist on that issue. Whoops.

“When you are not with where a majority of Americans are, then, you know, that is extreme. That is an extreme way of thinking,” Jean-Pierre said.

This is, quite frankly, an extremely un-American point of view. This country’s system of government was designed to protect the minority from abuse by the majority. Not being in the majority doesn’t make you an extremist by default.

But, forget that for a moment. Because, by her own definition, Biden supporters are extremists.

It’s true. According to the latest RealClearPolitics average, Biden has an approval rating of 42.1 percent and a disapproval rating of 54.8 percent. That means those who disapprove of Biden are in the majority–and “when you are not with where a majority of Americans are … that is extreme.”

Right, Karine? That is what you said, isn’t it?

She most certainly did say it.

'I certainly don't need lectures or invitations from Republicans about the border': Karine Jean-Pierre slaps down Ted Cruz's request for her to visit Texas and see migrants crossing into the U.S. on foot​

Reading from a prepared notebook, she continued: 'Some of those kids still haven't been reunited with their friends. And so one thing I will say is I certainly don't need lectures, or invitations from Republicans about the border or border policies,' she fumed.

'And I certainly won't take advice on border coming from anyone who voted against securing record level of funding for the Department of Homeland Security. And while folks are sending invites, I'll use this opportunity to, to invite him or anyone else next time to vote for record funding for DHS as President Biden has requested,' she concluded.

Her posture was bolstered by her past border trip – an issue that President Biden and Vice President Kamala Harris themselves stumbled over early in the administration.

“If denying an election is extreme now, why wasn’t it then?” he asked.

“So let’s be very clear that that comparison that you made is just ridiculous,” she said.

“How is that ridiculous?” Doocy interjected.

“You’re asking me a question, let me answer it,” she pushed back. “I was talking specifically at that time of what was happening with voting rights and what was in danger of voting rights. That’s what I was speaking to at the time and here’s the thing, I have said, Governor Kemp won the election in Georgia. I’ve been clear about that. I have said President Trump won the election in 2016 and I’ve been clear about that.”

Even With Crib Notes, Karine Jean-Pierre Embarrasses Herself​

Even With Crib Notes, Karine Jean-Pierre Embarrasses Herself​

Nordstrom Pipeline is how all that overpriced #### gets into NY, LA and DC.

Nordstrom Pipeline is how all that overpriced #### gets into NY, LA and DC.
Click to expand...

She was going shopping after she was done. The store was on her mind.

“I cannot speak to anything outside of what we’re seeing, right? Which it is indeed a political play, it’s cruel. It is a cruel way for elected officials, for people who have power or the people who are elected by their constituencies to behave in this way, and we should call it out,” the press secretary said. “Other Republicans should call it out. Republicans, their colleagues should be calling out the cruel way that they are playing and what they’re doing with their cruel political games. And again, these are families that are including children.”
H

“I cannot speak to anything outside of what we’re seeing, right? Which it is indeed a political play, it’s cruel. It is a cruel way for elected officials, for people who have power or the people who are elected by their constituencies to behave in this way, and we should call it out,” the press secretary said. “Other Republicans should call it out. Republicans, their colleagues should be calling out the cruel way that they are playing and what they’re doing with their cruel political games. And again, these are families that are including children.”
Click to expand...

Its been going on for months. Florida just found the tipping point place to get them to notice.

PREMO Member
This woman is probably the WORST public speaker, not to mention "Press Secretary" I have ever heard. It's painful to watch her stutter and stammer her way through each question. She's worse than the last one, and that's saying something.

Bann said:
This woman is probably the WORST public speaker, not to mention "Press Secretary" I have ever heard. It's painful to watch her stutter and stammer her way through each question. She's worse than the last one, and that's saying something.

It's better when Gutfeld adds bongos.

PREMO Member
“Why would the president turn down a DHS plan then to move migrants to the Northern border, to relieve some of the crowding at the Southern border?” Heinrich asked.

“I just — I was just asked about this question. That’s been already asked and answered. I literally just answered that question,” Jean-Pierre replied.

“I didn’t understand what your answer was. Did he turn down a plan or –” Heinrich pressed.

“When this is over, you can look at the transcript and take a look,” Jean-Pierre replied.

“So you won’t clarify?” Heinrich asked.

Jean-Pierre continued on to highlight the Republicans who had been “playing games” and using peoples lives as “political pawns,” by voting down record funding for the DHS. 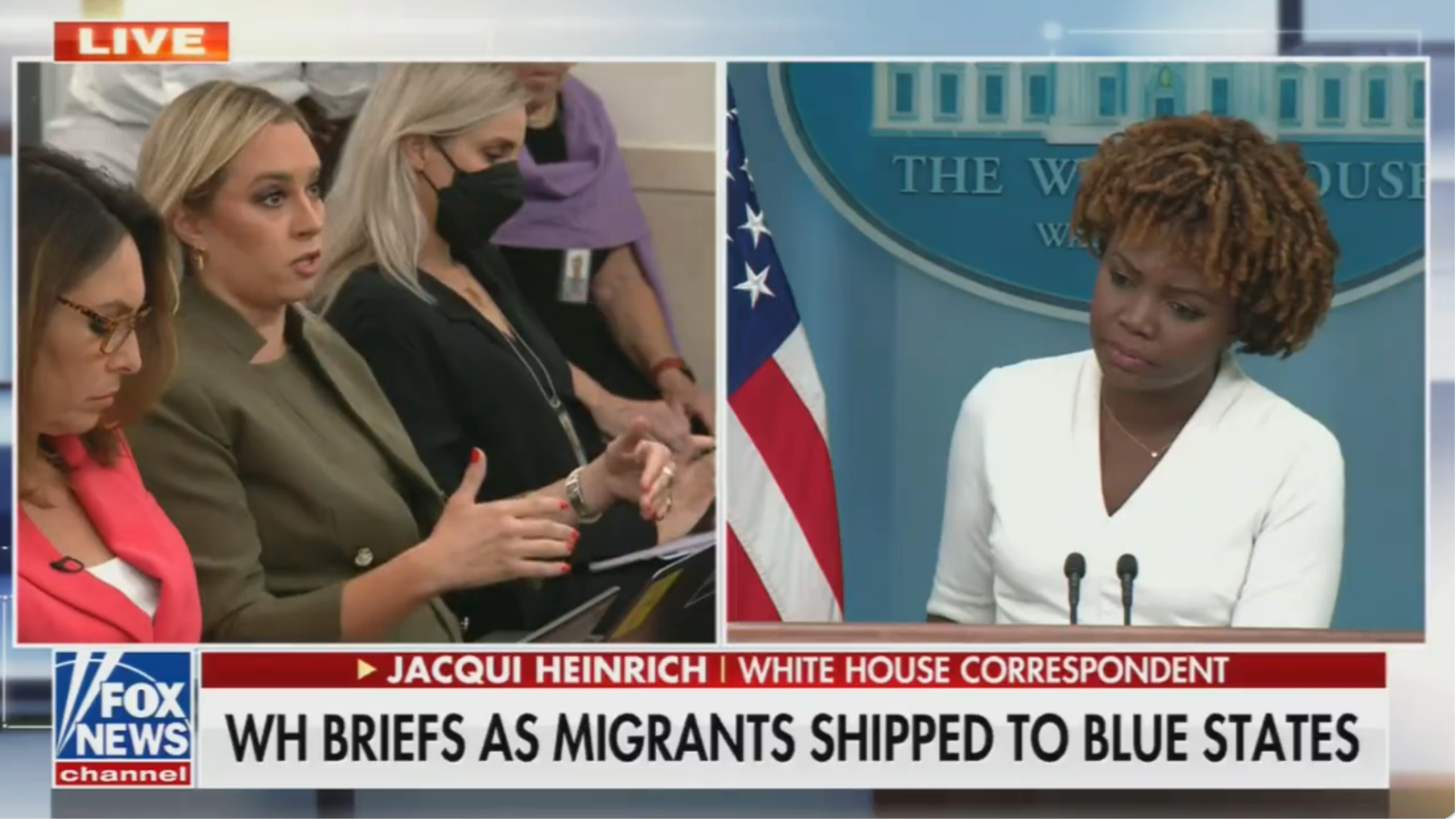