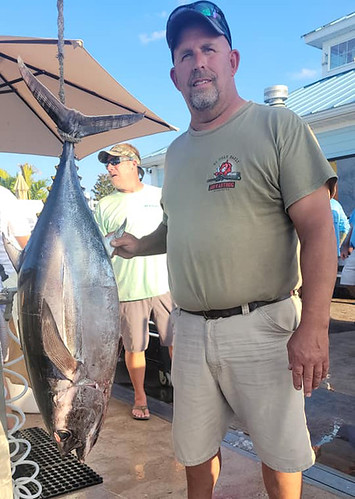 
Thomas “Tad” Bodmer of Poolesville has been recognized by the Maryland Department of Resources as the new state record holder Atlantic Division for albacore, or long-fin tuna (Thunnus alalunga), with his 77-pound catch.

Bodmer, a recent convert to saltwater fishing, was aboard the charter Top Dog on September 20 as Captain Ryan Knapp and First Mate Josh were preparing to head back to shore after a slow fishing day. In a matter of minutes, three different lines went out simultaneously. The trio scrambled to pick up rods.

“It was chaos,” Bodmer said. “I would get my fish close and then it would run back out. It took 25 minutes to get it.”

Bodmer landed the record albacore trolling a naked ballyhoo bait. The crew knew they had a big albacore but didn’t think it was a record-breaking catch until it was officially weighed.

“All these people came out of the woodwork with cameras,” Bodner said. “I was like a deer in headlights.”

The weight was officially certified by Sunset Marina in Ocean City. A Maryland Department of Natural Resources biologist confirmed the catch.

The previous record was set in 2004 by Victor W. Gardner.