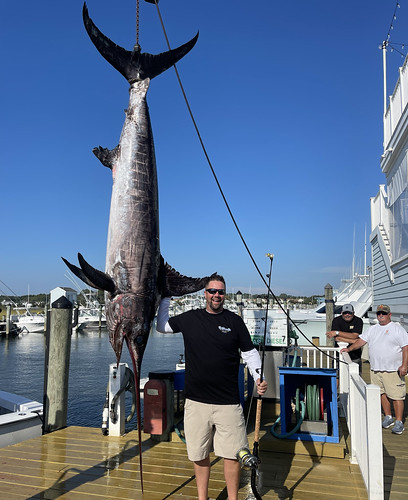 
Jeff Jacobs has been officially recognized by the Maryland Department of Natural Resources (DNR) as the new state record holder for the Atlantic Division with a 393-pound swordfish (Xiphias gladius) he caught in the canyons off the coast of Ocean City.

Jacobs, 38, was on charter boat RoShamBo with Captain Willie Zimmerman and crew and preparing to return to shore following a successful day on the water. Just then the boat’s Shimano Tyrnos 50 two-speed reel, baited with eel and a blue-white skirt, was tugging

Before long the fish “jumped out of the water and looked like a Volkswagen,” Jacobs said.

Already exhausted from an eight-hour fishing trip, Jacobs spent the next five and a half hours fighting to pull the huge fish aboard.

“Giving up wasn’t an option,” Jacobs said. “When (we) saw it we all knew it was a state record.”

The swordfish is more than 90 pounds larger than the previous record, set in 2021 by New Jersey resident Jake Bertonazzi. The department maintains state records for sport fish in four divisions – Atlantic, Chesapeake, Nontidal, and Invasive – and awards plaques to anglers who achieve record catches.