It's perhaps not completely surprising that a meat corporation is schooling the internet on the spread of false information. Steak-umm has been using its Twitter platform to crusade against coronavirus conspiracy theories since last year. It's also gone on "tweetstorm rants" about scientific literacy, woke brands, and other topics.

It has set the brand apart, with its steady stream of social awareness commentary (the company swapped "mistakes" for "misteaks" and "meet" with "meat" throughout its Thursday thread.)

Brands at large have felt pressure to take stances on political and social issues using their social media accounts in the last year, including on the 2020 presidential election and on racism.

But Steak-umm has taken that to the next level, slicing through the noise and serving up logic-laden tweets.


Klobuchar’s proposal for a Ministry of Public-Health Truth is especially chilling when you consider the broader trend of which it is merely the latest example. Misinformation is certainly bad for democracy. But, like the accusations of racism that abound today, the “misinformation” label is rarely an apt description of its subject. It is, rather, a rhetorical trick, employed for its value as a political weapon rather than as a signifier.

It is no mere coincidence that, like the Ministry of Truth in Orwell’s 1984, the progressives’ campaign against “misinformation” entails their emphatic right to proclaim obvious falsehoods while suppressing their political adversaries’ right to speak obvious truth. The label is not used as a signifier at all, but as a tool of arbitrary power. It is the rule, the accusation, and the conviction, all bundled up in a single word — with no possibility of appeal. Its user automatically wins whatever argument may be at stake, thereby rendering further debate superfluous. After that, silencing the opposition becomes merely a ministerial function.

Think about it. If the Klobuchar bill were concerned with actual misinformation rather than arbitrary control, wouldn’t it contain a simple, objective definition of “misinformation”? Well, it doesn’t. Instead, it empowers the Ministry of Truth — er, I mean the Department of Health and Human Services — to define medical misinformation. Why miss an obvious opportunity to help the bill look like something other than an Orwellian nightmare? Because when regulators seek a particular outcome, they must be able to decide what the rule is on a case-by-case basis, which incidentally is why all truly socialist systems must be dictatorships, as Friedrich Hayek noted.

At the Brookings Institution, Mark MacCarthy writes, “The distinction between publicly airing a legitimate scientific disagreement about the effects of vaccines and conducting a willful disinformation campaign to undermine public health is razor-thin. Do we really want a government agency to define that line between scientific truth and falsity in a way that has legal consequences?”

Not so long ago, a “Ministry of Information” was an institution unique to socialist “utopias,” which required rigorous establishment and enforcement of official truth to maintain state power. As absurd as such an institution may have once seemed to us in the West, we are unfortunately seeing signs that it can indeed happen here.

On July 22, Sens. Amy Klobuchar and Ben Ray Lujan announced the “Health Misinformation Act,” proposing an exemption to Section 230 of the Communications Decency Act. The bill stipulates that “[f]eatures that are built into technology platforms have contributed to the spread of misinformation and disinformation, with social media platforms incentivizing individuals to share content to get likes, comments, and other positive signals of engagement, which rewards engagement rather than accuracy.”

The initiative came in the wake of statements by President Joe Biden and Press Secretary Jen Psaki, who have been less concrete (but certainly as belligerent) in intending to hold tech platforms accountable for the public proliferation of medical “misinformation.”


The contractor will provide services to U.S. Central Command and its mission partners with operational planning, implementation and assessment services.

Peraton has undertaken such work for Central Command since 2016 under its counter-threat messaging support program, and according to the company, the latest contract represents a doubling of work already scheduled to be carried out under the program.

Commenting on the contract, Tom Afferton, president of Peraton’s cyber missions sector, said: “Since 2016, Peraton has executed campaigns to promote regional security and stability. Our ability to provide the U.S. government with insight, expertise, and influence helps ensure the safety of Americans, our allies, and the more than 550 million people under U.S. Central Command’s area of responsibility, spanning three continents and 20 nations.”

Vorhis was a senior software engineer at YouTube and Google. He left after discovering the companies censored conservatives.


The madness of Big Tech and their attempt to mold our reality into a version compatible with their globalist view of the world has never been portrayed better than in this chilling account by Google whistleblower, Zach Vorhies. As a senior engineer at Google for many years, Zach was aware of their bias, but watched in horror as the 2016 election of Donald Trump seemed to drive them into dangerous territory. The American ideal of an honest, hard-fought battle of ideas—when the contest is over, shaking hands and working together to solve problems—was replaced by a different, darker ethic alien to this country's history.
Click to expand...

He also said Google’s algorithm tacked new negative stories about Trump onto old ones in order to keep them at the top of search results longer.

Remember that "Twilight Zone" episode with Billy Mumy as the lead? The episode was call "It's a Good Life." The synopsis is as follows (from IMDB):

In a small farming community in Ohio, a young boy by the name of Anthony Fremont terrorizes those around him. Anthony has the ability to command anything he wants simply by thought. The community is cut off from the outside world and the boy insists that those around him think only pleasant thoughts, and if they don't, he eliminates them. Everyone walks in fear of the lad who ably demonstrates what he's prepared to do at a small party in his home.

We're living in a "Twighlight Zone" episode, not only in this country, but around the world as emotionally regressed children throw temper-tantrums when the world does not cater to their every whim and the ruling elite (aside from being exactly like them, AOC) pander to them in order to keep Americans as fragmented and afraid, and ultimately as powerless as possible.

Google’s algorithm tacked new negative stories about Trump onto old ones in order to keep them at the top of search results longer.
Click to expand...

This much I’ve noticed on my own. I look up stuff about Biden and it skews off on some thing about Trump. I look up something on an issue I get years old pages about the opposite of what I want.

SamSpade said:
This much I’ve noticed on my own. I look up stuff about Biden and it skews off on some thing about Trump. I look up something on an issue I get years old pages about the opposite of what I want.
Click to expand...

I've stopped using Google for searches. I would search for articles I knew were out there but Google wouldn't list them likely because of their political point of view.

Me: googles Biden's greatest accomplishments so far as President
Google: "But Truuump!"

Funny thing is - on almost everything else, Google is the best. Just not on anything with a political bend to it. Their shopping search engine, the maps - they're better on all those. I just find that they're hopelessly one-sided when it comes to social issues and politics. 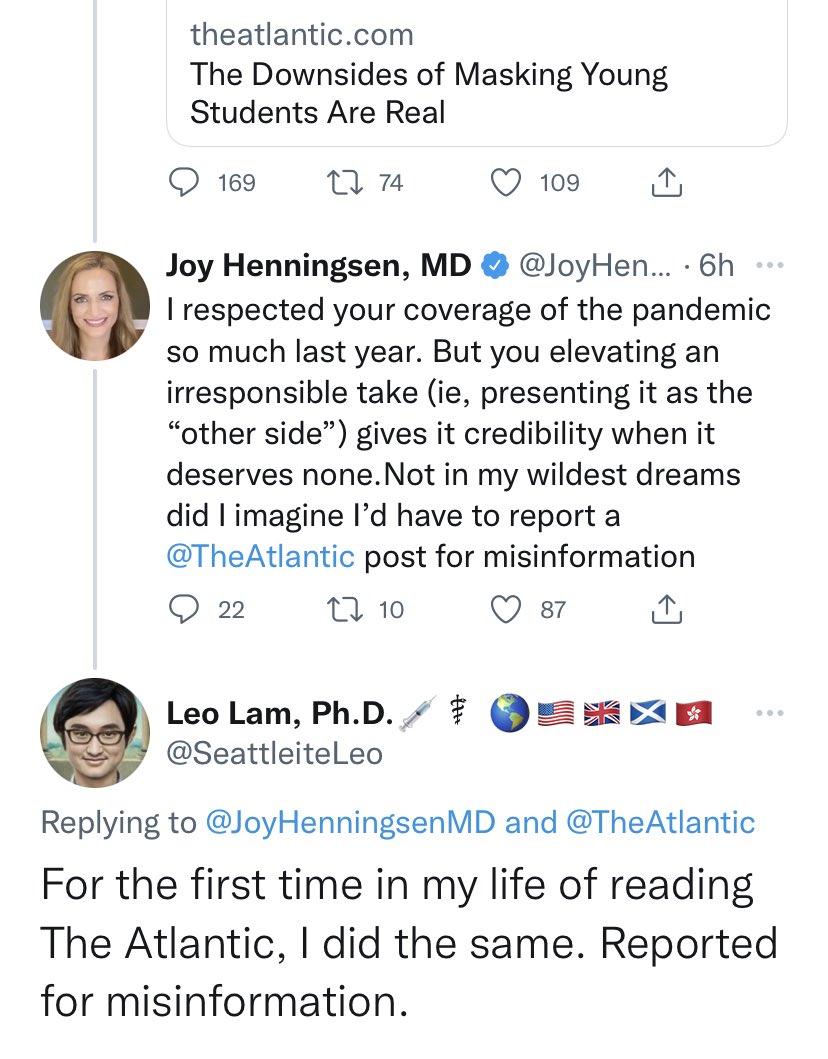 The Atlantic piece was written by an epidemiology professor at UC-San Francisco, Vinay Prasad, who concluded that the potential harms of masking young children may outweigh the benefits. He wrote nothing factually incorrect that I am aware of, and neither of the Twitter critics pictured above deigned to specify what they found. They have taken what is simply an opposing viewpoint and rebranded it as “misinformation,” hoping the label will lead to censorship.

It is dismaying that so many people have adopted the same censorious mindset. Last week the Washington Post ran this headline: “Misinformation on Facebook got six times more clicks than factual news during the 2020 election, study says.” The implication is that Facebook needs to more actively remove false claims, and who could be against that? Well, first note that the headline itself is misinformation. According to the text of the article, the content that received six times more clicks was not specifically alleged to be misinformation; rather, it was merely posted by “news publishers known for putting out misinformation.”

The Post article provides no examples of actual misinformation, but it does name Occupy Democrats and Dan Bongino as “publishers known for misinformation” on Facebook. I went to their pages to see for myself. Occupy Democrats mainly posts progressive memes. Dan Bongino mainly posts clips from cable-news shows and town halls. I don’t doubt that one could find factual problems on both pages with enough searching, but I saw nothing obvious. To censor either of these pages would be to go far beyond rooting out “misinformation.” And perhaps that’s the point. Dismissing entire sources of news as misinformation far more effectively narrows the boundaries of acceptable discourse than does stamping out individual ideas.

“Despite the fact that vaccination remains our greatest tool to protect Americans from the virus, myths about COVID-19 vaccines continue to spread, often facilitated by technology companies that refuse to curb misinformation,” she said.


Amazon has responded to the letter in a statement.

"As a company, we continue to encourage our employees to get vaccinated, and we believe it is an important step for communities to stay healthy and recover from the pandemic. As a retailer, we respect that our customers want access to a wide variety of viewpoints on the matter, which is why we continue to list the books in question," an Amazon spokesperson told Fox News.

Warren, who spent the six-page letter denouncing misinformation, also blasted Ivermectin, which she said “is used to treate [sic] parasites in livestock”—completely ignoring the fact that the drug is also used for humans in tablet form to treat a variety of parasites.

There's another story going around about it causing sterility. Which if true might help control any population increase from the refugees.

herb749 said:
There's another story going around about it causing sterility. Which if true might help control any population increase from the refugees.
Click to expand...

Dems have used eugenics to cull African Americans for years, I'm sure their reasoning is it should work just as well on Afghanis.

If anyone is getting their information from the MSM or government, it is all misinformation.

If anyone is getting their information from the MSM or government, it is all misinformation.
Click to expand...

The MSM is the state media.
H

Smokey1 said:
The MSM is the state media.
Click to expand...

When democrats are in charge .

herb749 said:
When democrats are in charge .
Click to expand...