PREMO Member
Ad Free Experience
Patron
...has taken up residence. She was 3 on 24 August. Similar to the reasons we got Miss Blue (allergies resulting from medical treatment), her previous family needed to re-home her.

Buff snuck up quietly behind her to get a sniff, and was fairly gently told off with some hisses and growls.

She is staying in the kitty "nursery" (our guest bedroom). 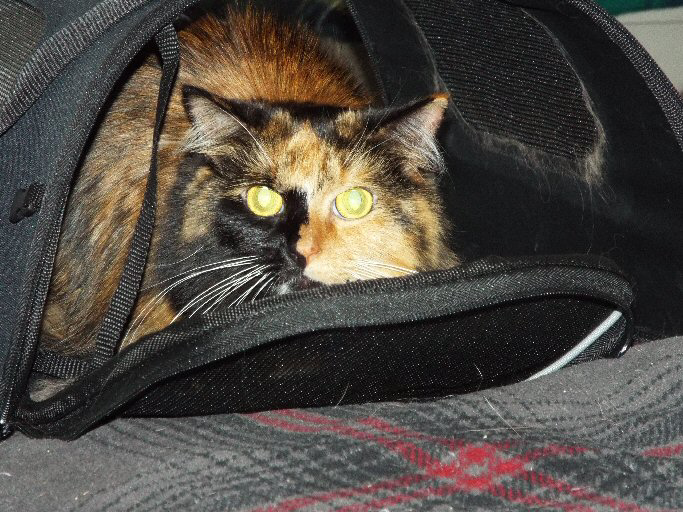 PREMO Member
Ad Free Experience
Patron
She is hiding under the bed, not sure if she's eaten since taking up her safe haven.

I installed a couple of cameras I can monitor from my tablet.

Former guardian said Phoenix hid for the 1st 5 days they had her.

PREMO Member
Ad Free Experience
Patron
Miss Phoenix came out from under for a little bit, found her food and water, and then spent about 10 minutes atop the bed, according to the camera pings between 10:00 and 10:30 this evening.

spr1975wshs said:
Miss Phoenix came out from under for a little bit, found her food and water, and then spent about 10 minutes atop the bed, according to the camera pings between 10:00 and 10:30 this evening.
Click to expand...

I, officially, proclaim you The Cat Whisperer.

Louise said:
I, officially, proclaim you The Cat Whisperer.
Click to expand...

I was trying to sleep in the room again, got woke up about 2 AM.
Cooper was under the bed trying to reclaim His Spot.

He and Phoenix were singing the Song of Their People to each other.
There was no physical contact and he did leave when I shooed him off.

Anita woke up, too.

Checked the cameras, looks like Buff got the door open about 1/2 hour before, but was just nosing around the foot of the bed, then left on his own.

I turned the privacy lock after Cooper left, like I told Anita I would, and later heard activity at the door handle.
Buff is long enough and does know how the paddle style handles work, Cooper will push at the door.

It looks like Phoenix has been drinking water, at least nibbling at her food, and left a deposit in the litter pan.

PREMO Member
Ad Free Experience
Patron
Also, forgot the privacy lock, and was awakened at 7:30 AM by the boys getting the door open again.

About 12:20 AM, she finally came to look at me sleeping on the floor according to the camera on that side of the room.

Also had a few minutes long supervised visit by the boys. Buff was most interested to be up on the corner unit where he is used to being fed a gravy treat (which I did move to the hallway). Cooper was sniffigating around the scratch pad and captured ball toy. Phoenix held to her safe spot under the headboard. The growl was constant, but low, just a warning.

Neither boy tried getting under the bed and left when shooed.

PREMO Member
Ad Free Experience
Patron
Seems like Mr. Cooper still has a surprise or two hidden in his little head for us.

I was sleeping atop the spare bed and a little before 3 was awakened by the sound of the top baby gate falling to the floor outside the room. Figured the boys were cooperating in bringing the "Wall of Jericho" down. Expected such an object falling at them would have caused the boys to run for cover elsewhere.

Buff was indeed back over by the head of the stairs. Figured Cooper was under our bed in the master bedroom.

I got the gate replaced atop the other, turn around and to my surprise, our big boy had jumped over the gate and was sniffigating around the food, water and scratch pad. I really thought he was jump challenged enough that he could not get over the 2' high thing.

He did not complain too much as I scooped him up and dropped him in the hall. Took the top baby gate down, as it interferes with the door handle, closed the portal and turned the privacy lock.

Got up about 9 AM, refreshed Missy P's Fancy Feast bowl, and the little bell has been going off...she spent about 10 minutes chowing down. I feel that her regaining a healthy appetite (with resulting good litter box habits) is a proper start to her acclimation.

On cats and jumping... back when our little beast was smaller than my foot , our roommate wanted him away from his room (another amusing story there), so me and LW constructed a 5’ tall “baby gate” to keep him out of the hallway.
Within an hour of installation, the top of the “gate” became his favorite perch, from which he took swipes at our poor roommate

PREMO Member
Ad Free Experience
Patron
The food cam is definitely getting the most use of the 3 in the room.

PREMO Member
Ad Free Experience
Patron
Miss Phoenix woke me up about 3:30 this morning.
She was going to town on the cardboard scratch pad a few feet from my head (I sleep on the floor in the "nursery").
I held out my hand and talked to her in low tones.
For the 1st time she came up and sniffed my hand.
No hisses either.

spr1975wshs said:
The food cam is definitely getting the most use of the 3 in the room.
Click to expand...

The video doesn’t work for me. Glad Miss P is acclimating to her new lucky life.

spr1975wshs said:
Miss Phoenix woke me up about 3:30 this morning.
She was going to town on the cardboard scratch pad a few feet from my head (I sleep on the floor in the "nursery").
I held out my hand and talked to her in low tones.
For the 1st time she came up and sniffed my hand.
No hisses either.
Click to expand...

Congratulations! You have been accepted for a position on HRH Queen Phoenix's staff.

Louise said:
The video doesn’t work for me. Glad Miss P is acclimating to her new lucky life.
Click to expand... 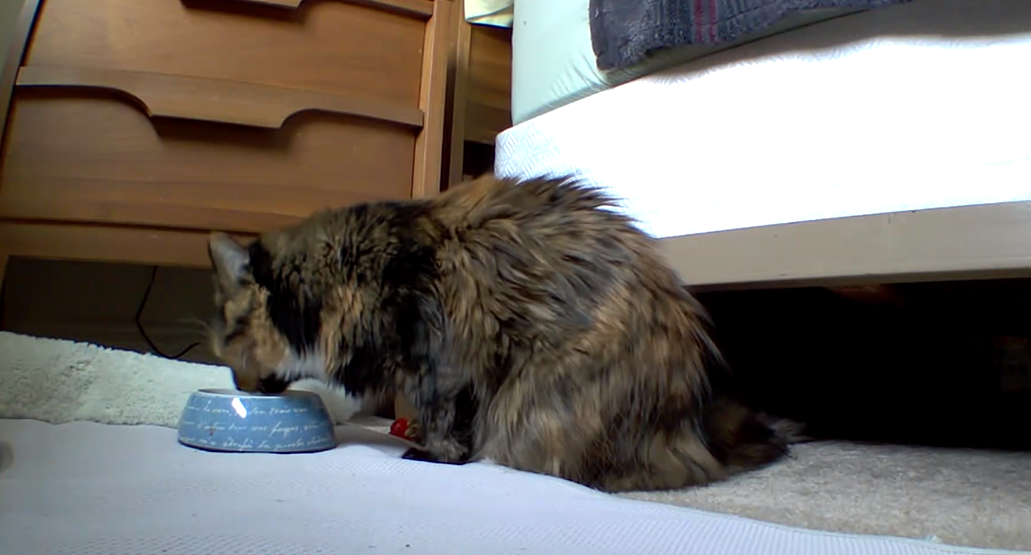 PREMO Member
Ad Free Experience
Patron
A bit of a set back last night.
Cooper came in for what was to be a supervised visit.
I think he was feeling out of sorts because Buff is in solitary before being brought to the vet for a dental this morning.

He went under the bed where he and Miss Phoenix had a bit of an argument.
It does not look like any physical contact was made and Cooper did scoot when I went to grab him.

PREMO Member
Ad Free Experience
Patron
In addenda, Buff got through the dental in championship form. Tooth was so loose, vet did not charge an extraction fee. Other tooth needed a good cleaning. Within minutes of getting home, he headed for the kibble. Last night he was walking the railing 13' above the foyer floor.

Miss Phoenix was out from under the bed late yesterday afternoon for about 10 minutes with me in the room doing kitty staff stuff. She looked at me, no hisses, and then played with the feather toy I bought her. Earlier, the kitty cam showed she spent the better part of an hour on the window perch.
Last edited: Jan 18, 2021

PREMO Member
Ad Free Experience
Patron
For the 1st time, as I drove up after work last night, saw Miss Phoenix sitting in the window.
She stayed about 2 minutes after recognizing a human was looking up at her.

She did notice me watching and came close enough to sniffigate my hand, without a hiss.

Phoenix also walked between the sleeping bag where I lay and a dresser by the doorway, close enough to touch, but I did not want to spook her.