Theft- On November 12, 2022, Dep. Reynolds responded to the 46500 block of Expedition Drive in Lexington Park, for the reported theft. The victim advised Isiaih Alexander Woodland, age 18 of Lexington Park, stole the victim's keys and then proceeded to take the victim's vehicle. While Woodland had the vehicle the victim received messages from Woodland threatening to call law enforcement and allege false crimes committed by the victim if the victim reported the vehicle theft. The vehicle was observed by Dep. Tasciotti operating in the 22700 block of Three Notch Road in Lexington Park. The vehicle was stopped and Woodland was taken into custody. Located in the vehicle was over 10 grams of suspected marijuana. Woodland was charged with Theft, Motor Vehicle: Unlawful Taking, Rogue and Vagabond, Extort/Slander, and CDS: Possession-Cannabis 10 grams plus.

Assault- On November 12, 2022, Dep. Truss responded to the 36800 block of Danny's Way in Chaptico, for the reported assault. The victim advised Christina Margaret Buckler, age 38 of Chaptico, threw items at the victim and scratched the victim. The victim had visible scratches and Buckler was arrested and charged with Assault 2nd Degree.

Indecent Exposure- On November 12, 2022, Dep. Stewart responded to the St. Mary's County Detention and Rehabilitation Center in Leonardtown, for the reported Indecent Exposure. Investigation determined Demetrius Roshawn Puifory, age 44 of California, exposed his genitals to the victim. Puifory was charged with Indecent Exposure.

Assault/Reckless Endangerment- On November 13, 2022, Dep. Tasciotti responded to the 45000 block of Deer Pond Lane in California, for the reported assault. The victim advised during an argument, William Reed Mesmer, age 54 of California, removed a handgun from his waistband, and fired a shot into the ground near the victim. The victim advised Mesmer then pointed the firearm at the victim Mesmer was arrested and charged with Assault 1st and 2nd Degree and Reckless Endangerment.

Fraud/False Statement- On November 13, 2022, Dep. Stewart made contact with Steven Wayne Sams, age 43 of Waldorf, in the 27600 block of Three Notch Road in Mechanicsville. Sams provided Dep. Stewart was a false name, due to having outstanding warrants for his arrest in another jurisdiction. Sams was arrested and charged with Fraud/Person: Avoid Apprehension.

Assault- On November 13, 2022, Dep. Haas responded to the St. Mary's County Detention and Rehabilitation Center in Leonardtown, for the reported assault. Investigation determined Leonard Charles Hall III, age 28 of no fixed address, grabbed the victim's wrist after refusing to secure in his cell. Hall was charged with Assault 2nd Degree.

Assault/False Imprisonment- On November 14, 2022, Dep. Senatore responded to the 21300 block of Chancellors Run Road in Great Mills, for the reported disturbance. Contact was made with the victim who had multiple abrasions to the face and neck. Investigation determined Dylan Shane Chapman, age 22 of Great Mills, assaulted the victim by striking the victim in the face multiple times and strangling the victim. During the incident Chapman stole and destroyed the victim's phone and prevented the victim from leaving. Chapman was charged with Assault 1st and 2nd Degree, Theft, and False Imprisonment. 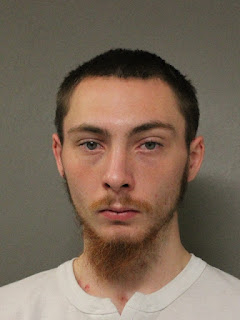 Fraud- On November 14, 2022, Dep. Jerew responded to the 46800 block of Rogers Drive in Lexington Park, for the reported disturbance. Upon arrival contact was made with Tyree Duprei Scott, age 28 of Lexington Park. Scott provided Dep. Jerew with a false name to avoid apprehension on outstanding warrants. Scott was positively identified and arrested. Scott was charged with Fraud: Person-Avoid Apprehension and served the outstanding warrants for Failure to Appear/Trespass: Private Property.

Indecent Exposure/Disorderly Conduct- On November 14, 2022, Cpl. Teague responded to the 21700 block of Tulagi Place in Lexington Park, for the reported indecent exposure. Upon arriving at the bus stop, Cpl. Teague observed William Jerome Swales Jr., age 42 of no fixed address, dancing in a circle, nude from the waist down. Swales was also fondling himself, and bending over while numerous citizens were in the area. Swales was arrested and charged with Indecent Exposure and Disorderly Conduct.

Trespassing/Disorderly Conduct- On November 15, 2022, Dep. Kril responded to the 22700 block of Three Notch Road in California, for the reported trespassing. Investigation determined Nadezda Valadiminovhol Osipova, age 37 of no fixed address, entered the restroom of the business and locked herself inside. Osipova remained in the bathroom for over an hour, playing loud music. Osipova refused to leave the restroom after being told to do so multiple times by an employee. Dep. Kril arrived on scene and advised Osipova to vacate the business; Osipova refused and was arrested. Osipova was charged with Trespassing: Private Property and Disorderly Conduct.