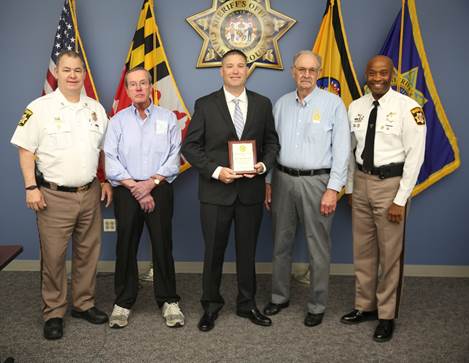 The Charles County Sheriff’s Office (CCSO) is pleased to announce PFC Jonathan Kelly was named the Sons of the American Legion First Responder of the Year for 2021. PFC Kelly began his career at the CCSO in 2005. In his 16-year career, he has served in the Patrol Division, Special Services Division and the Special Operations Division. PFC Kelly was selected by the Sons of the American Legion for this prestigious award as a result of his actions in the following incident:

On May 17, 2021, while attempting to serve an arrest warrant on a wanted subject with a lengthy history of violent encounters with law enforcement, two Charles County Sheriff’s Officers were shot by the wanted man. After being shot, one of the officers retreated to an upstairs bedroom and exited the house out of a second story window, dropping into the yard of the residence. PFC Kelly, who was in a position of cover, ran to assist the officer. After dragging the officer to safety, PFC Kelly applied a tourniquet to the officer’s leg upon seeing the gunshot wound. In order to quickly get the officer to a safe location to receive medical care, PFC Kelly placed the officer on the hood of another officer’s vehicle and laid on top of him to secure him while they were driven away from the scene.

PFC Kelly’s actions and decisions made during this dangerous and stressful incident stabilized the officer’s injuries and facilitated his transfer to medical personnel as quickly as possible. For these life-saving efforts, the Charles County Sheriff’s Office presented PFC Kelly with the Silver Medal of Valor.

“PFC Kelly’s actions that day were selfless, courageous, and critical to getting another officer to safety,” said Sheriff Berry. “We are so proud of all of the officers and employees that showed many acts of bravery during this horrific incident. We are grateful that the Sons of the American Legion want to recognize their efforts.”