Pioneer Quest - A year in the real west

PREMO Member
We are in a campground with pokey internet. Vrai upgraded our wifi for the month that we are here. She's the best! ANyhow now that we have it, we need to use it. She knows I like those period reality shows. Knowing this she put Pioneer Quest on our watch list. It's been rainy & colder here, so why not watch TV in our cozy abode.

The last period show we watched was full of drama. At the end the production crew couldn't even get everyone to get together to talk about their personal experience of the project. Those shows are both fascinating and frustrating to watch. These are 3-4 month long projects. But you only get to see 6 hours of the entire experience. So the viewers miss a lot of what goes on.

Pioneer Quest was different in several ways. They would run a homestead for an entire year. The location was somewhere in Manitoba, Canada. Winters there are brutally cold. There were 2 couples and no children. Just 4 people trying to eke out a living on the land using period tools from the 1880s. They showed 8 one hour shows then did a 1 hour where are they now show after the settlers went back to modern life.

While they had some drama, it wasn't to the level of the other period shows that I've watched. (Frontier House, Colonial House, Texas Ranch House) 1 of the original couple had to drop out after the husband was charged with sexual assault back in the real world. So they quickly got a replacement couple. In the new couple it was the husband's idea to apply for the show. The wife said she was just going along for her hubby's sake and wasn't really into the whole concept. To her credit she rallied nicely.

So they endured never ending rain, crop failure, swarms of mosquitoes, no toilet paper, flies, a corral catching fire and severely injuring their pig, the older guy went to the hospital with a heart condition, a close relative on 1 participant died so she left to go to the funeral, Frozen laundry, hauling water, snow from October to April, and being annoyed on some level by being surrounded by the same people all the time.

The younger couple were always laughing no matter the situation. They had a great attitude. Nothing ever seemed to get them down. The husband of the older couple was this quirky dude that didn't seem to be very self aware. It was like he was in perpetual adolescence. All 4 worked hard and they accomplished a lot. They had to build their own cabins and in a few months time had quaint homes with lots of homey touches. Housebound in the bitter winter, they did crafty things like knit, quilt and make rustic furniture.

As I sit and watch those shows, I always try to imagine myself doing what they are doing. At my current lot in life, I'm content to sit in the comfort of our RV and live vicariously through them. If you like these sort of programs, try to catch this on if you can. 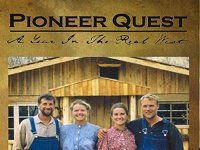 Found the story of Dick Proenneke interesting, read his book/journals and there's an hour documentary out on youtube, I believe.

Grumpy said:
Found the story of Dick Proenneke interesting, read his book/journals and there's an hour documentary out on youtube, I believe.
Click to expand...

I have 2 of those videos. I use to bore people with those. My favorite part was the door hinge made out of the tree root. He was a true craftsman with those hand tools.

Monello said:
I have 2 of those videos. I use to bore people with those. My favorite part was the door hinge made out of the tree root. He was a true craftsman with those hand tools.

Good stuff, guess I missed that post when I was travelling the Yangtze in search of a Mongolian horsehair vest.
R

Monello said:
I have 2 of those videos. I use to bore people with those. My favorite part was the door hinge made out of the tree root. He was a true craftsman with those hand tools.