The CDC has published a technically true — but profoundly misleading — statistic about the chance of outdoor infection. The story is brought to us by New York Times journalist David Leonhardt in his daily, “The Morning Newsletter”:

When the Centers for Disease Control and Prevention released new guidelines last month for mask wearing, it announced that “less than 10 percent” of Covid-19 transmission was occurring outdoors. Media organizations repeated the statistic, and it quickly became a standard description of the frequency of outdoor transmission.
Click to expand...

So, what’s the actual number?

The number is almost certainly misleading. It appears to be based partly on a misclassification of some Covid transmission that actually took place in enclosed spaces (as I explain below). An even bigger issue is the extreme caution of C.D.C. officials, who picked a benchmark — 10 percent — so high that nobody could reasonably dispute it.
That benchmark “seems to be a huge exaggeration,” as Dr. Muge Cevik, a virologist at the University of St. Andrews, said. In truth, the share of transmission that has occurred outdoors seems to be below 1 percent and may be below 0.1 percent, multiple epidemiologists told me.
Click to expand...

That is not merely an exaggeration. It’s what is known as a whopper.

PREMO Member
Susan Collins to CDC chief: I used to think your agency was the gold standard but not anymore


A lot of people agree, and not just average joes like me and you or politicians like Collins. There’s an unusual number of stories on the wires today quoting fellow scientists grumbling about the CDC’s self-defeating hypercaution in issuing COVID guidance. Ed already wrote about the most widely circulated one, in which the NYT challenged the CDC’s assessment that less than 10 percent of COVID transmission happens outdoors. That’s technically true, wrote David Leonhardt, but misleading in the same way that it’d be misleading that less than 10 percent of Americans win the lottery. Outdoor transmission accounts for more like one percent — or possibly one-tenth of one percent — of COVID infections. By being so conservative in its estimate, the agency is misleading people into believing they’re at greater risk outdoors than they are.

A Vox reporter contacted experts who’ve been vaccinated and asked them if they still deem themselves to be at risk from indoor transmission. Nope, not really, they said. Some are still wearing masks but only to protect others from being inadvertently infected by them just in case they happen to be carrying the virus. Others shrugged at the possibility of being infected, noting that “breakthrough infections” tend to be mild or asymptomatic. “I am fully vaccinated and have resumed normal activities,” said one infectious disease specialist in California. “I have gone indoor dining, went to my first movie theater, and would go to a bar if there was an opportunity!”

Collins and other Republicans pressed Walensky on two areas of guidance. One was outdoor transmission, suddenly a hot topic thanks to the NYT story, and the other was the agency’s already notorious rules for summer camp, which calls for masking even young children outdoors in the heat. Watch, then read on:

Don’t blame us for the “less than 10 percent” estimate on outdoor transmission, says Walensky. That came from an analysis in the Journal of Infectious Diseases last November. (“Five identified studies found a low proportion of reported global SARS-CoV-2 infections occurred outdoors ([less than] 10%) and the odds of indoor transmission was very high compared to outdoors (18.7 times; 95% confidence interval, 6.0–57.9).”) But Leonhardt challenged some of the data in that study in his piece this morning, noting that some cases of outdoor transmission in Singapore that influenced the conclusion most likely happened indoors. When he dialed around to epidemiologists, more than one told him they estimated that less than one percent of transmissions happen outdoors.

Only weeks ago, in late April, CDC Director Dr. Rochelle Walesnky said that less than 10% of documented COVID-19 transmission cases, as recorded in various studies, can be attributed to outdoor transmission. Dr. Walesnky used this figure when making the point that data suggests “most of transmission is happening indoors rather than outdoors.”

But The New York Times reports that the 10% figure is “almost certainly misleading,” and also appears to be based partly on misclassified data from Singapore construction sites.

Why am I still wearing a mask?
Because my RINO Governor hasn't the balls to take away his orders that they must be worn in stores.

I wonder what happened to those test kits . Are they still under guard by the National Guard so Trump won't come and get them in a midnight raid? 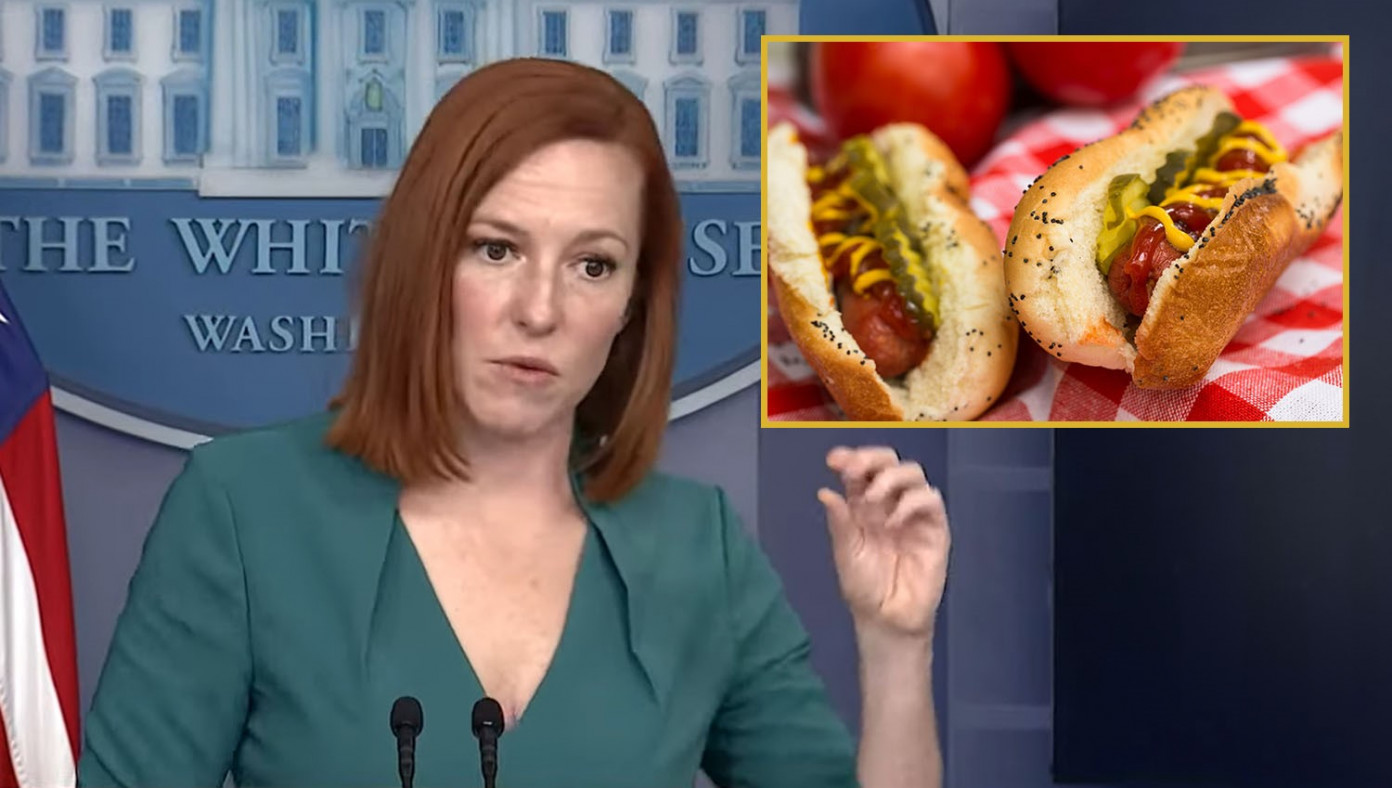 WASHINGTON, D.C. - In a press conference today, Press Secretary Jen Psaki reminded Americans that they must turn in their permission slips for eating a delicious grilled July 4th hot dog by this Friday.'We know you people enjoy your hot dogs, but it is the top priority of this administration...


Hours of analysis and reams of virtual paper have been wasted on the notion that "vaccine resistance" is a dilemma that will hinder our nation as we attempt to move past the debilitating, man-made disaster brought on by poor decisions made by elected officials faced with the coronavirus pandemic.

The narrative tends to follow the same outline. We're shown a poll that shows that the largest group of people in the country hesitant or downright suspicious of the vaccine is conservative evangelicals who voted for Trump.

The "analysis" will then stray from the raw poll numbers and descend into the typical, smug hectoring from Manhattan or Washington "experts" who've never met (let alone spoken to) a conservative evangelical who voted for Trump explaining how "these people" are putting us all in danger and that it's yet another example of how our country must be purged of these ignorant, uneducated know-nothings.

OK, maybe they don't explicitly talk about the "purge" part out loud, but you can see it in their eyes.

A very good analysis. Must watch the entire video. Shows that the "vaccine" is indeed experimental with "trials" to run until 2023.

PREMO Member
DeSantis Pardons Couple Arrested For Keeping Gym Open, Then Pardons Anyone Arrested For Not Masking Or Social Distancing

As far back as last September DeSantis had stated, “All outstanding fines and penalties that have been applied against individuals are suspended. I think we need to get away from trying to penalize people for social distancing and just work with people constructively.”

But some counties still punished residents for refusing to wear masks or countenancing such behavior; in Broward County, Mike and Jillian Carnevale, gym owners from Plantation, Florida, were repeatedly arrested for refusing to enforce a mask mandate.

A GoFundMe page set up by supporters of the Carnevales provides the following timeline of their case:

In direct retaliation to a lawsuit filed on July 26, 2020, Broward County began harassing Mike and Jillian Carnevale at the gym they owned. Taking a stand for the health and freedom of his community and country, Mike Carnevale was arrested on July 27th, August 6th, and August 7th for not enforcing facial coverings during strenuous exercise. Jillian Carnevale was also arrested on August 7th. On October 15th 2020, Broward county attacked freedom and wellness yet again by leveraging them out of our business and closing their community gym for good. This has left Mike and Jillian Carnevale in a state of shock and financial devastation, but this was not satisfactory for Broward County. On February 10th, 2021, Judge Robert Diaz offered a plea deal of 10 days in Jail and a diversion program to Mike Carnevale for the crime of “Violation of Disaster Preparedness Emergency Management.”
Click to expand...

Cuomo wondered aloud if the Biden-Harris administration refused to update CDC guidance about mask usage for fully vaccinated people, because it wished to retain pressure for social control:

Why? Why didn’t they update it? Is this about them Big Brothering us, and trying to keep it safer, longer? I could understand it. But it’s not honest. Remember, it also took them months to update the guidance, telling us COVID is airborne. Remember, aerosolization, the word we all had to learn how to say, and that it wasn’t all about wiping down surfaces.
Click to expand...

PREMO Member
Sounding a Bit Like a Dictator There, Joe Biden


The problem is that the Biden team has so frightened some folks with all this, they are still refusing to give up the masks.

But this sets up a paradox for those wearing the masks less for science and health, and more for seeming to adhering to the cult of the mask.

Biden has just told them either get vaxxed or wear the mask. They have to get vaccinated to adhere to the edict. But then he’s saying vaxxed OR masked. So if they wear a mask, they’re implying they’re horrible people who wouldn’t get vaccinated. If they don’t, then they’re freaking out as to what’s going to happen now that they’ve so absorbed it as part of their ethos and their way of virtue signaling. They want to know how will you be able to tell if someone is truly vaccinated, fearing that some might not be vaccinated but pretend to be. This is the fear that has been stoked in these folks.


In spite of the growing evidence that she is a fraud not to mention a seriously disturbed individual, Jones became so revered in media/left-wing fever swamps for “taking on the DeSantis Gestapo” that in January 2021 she received Forbes Technology’s first-ever “tech person of the year” distinction. She was also a featured speaker at a March journalism conference on how “when doing the right thing gets you fired.”

But though much has been written about and speculated on regarding Jones’ massive deception campaign over the last year, Charles C.W. Cooke did some more digging and wrote what may be the most definitive, receipt-filled investigative piece on Jones to date this week, thoroughly nuking her most explosive claims and documenting how viciously retaliating after rejection is one of Jones’ most notorious hallmarks.

There’s way too much to be excerpted here, but here are a few tweets he posted on what he found:

PREMO Member
Ad Free Experience
Patron
I was taught to respect my elders, but joe biden can **** himself with a red hot poker.

First, the New York Post broke the story on the teachers’ unions’ undue influence on the CDC’s school reopening guidelines. The New York Times tattled on the CDC and shredded Dr. Walensky for saying outdoor transmission is less than 10% of all infections. It is under 1%, possibly less than 0.1%, according to the data. This gross overstatement has no possible purpose other than continued restrictions. Now, ABC News tells us that all the places the CDC told us to avoid were not major transmission vectors:

Bars, gyms and restaurants. Those were just a few settings health experts warned could become hotbeds for COVID-19 spread as states began reopening in the spring and summer of 2020 following the first and second waves of the coronavirus pandemic in the United States.
Yet, public data analyzed by ABC News appears to tell a different story. The data from states across the country suggests specific outbreak settings (including bars, gyms, restaurants, nail salons, barbershops and stores — for the full list, see graphic below in story) only accounted for a small percentage, if any, of new outbreaks after the pandemic’s inital wave in 2020.
Click to expand...

How small, you may ask? Well, ABC included a handy graphic to help clarify: 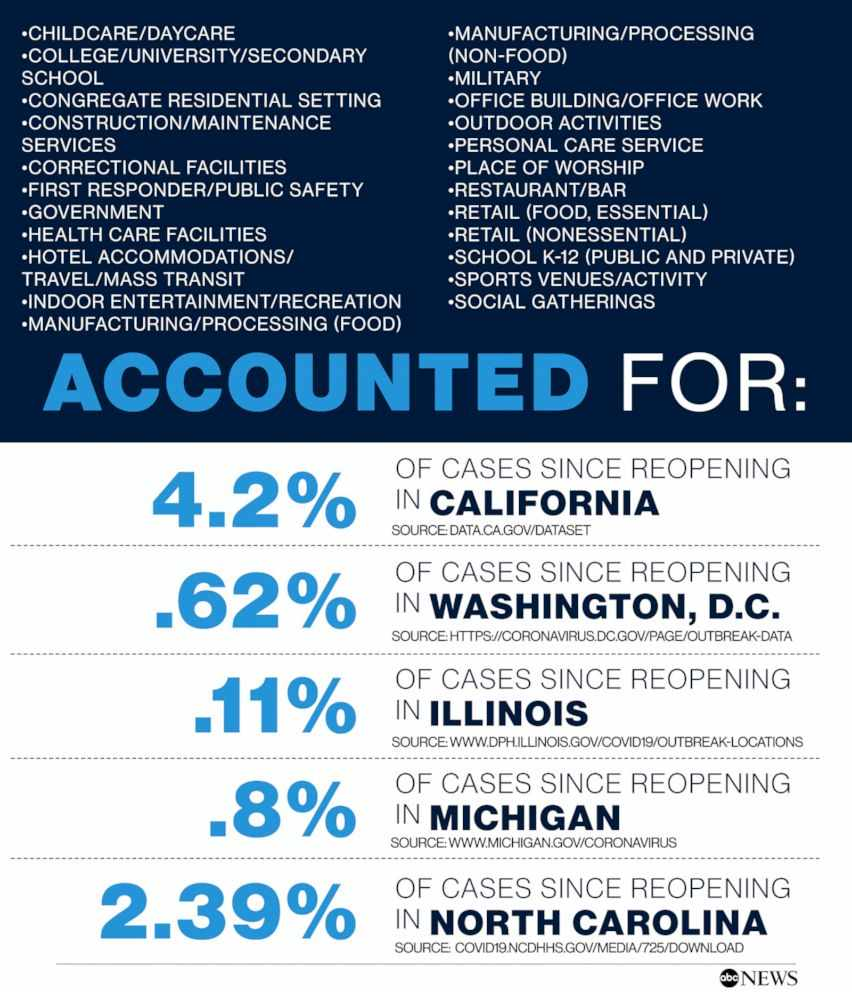