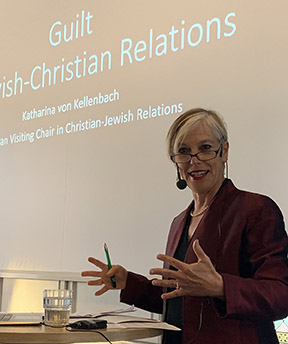 Professor of Religious Studies Katharina von Kellenbach gave the 2019 Krister Stendahl Memorial Lecture on October 31 in Stockholm, Sweden. The lecture's title was “Guilt as a Productive Force in the Transformation of Jewish-Christian Relations.” The Krister Stendahl Memorial Lecture is a yearly event to honor the memory of Krister Stendahl, bishop in Stockholm 1984-1988 and professor at the Divinity School at Harvard University. The author of "The Mark of Cain: Guilt and Denial in the Lives of Nazi Perpetrators" (Oxford University Press, 2013), von Kellenbach led a research group titled "Felix Culpa: Guilt as a Culturally Productive Force" in Bielefeld, Germany during 2018-2019 and is now the Corcoran Visiting Chair in Christian-Jewish Relations at the Center for Christian-Jewish Learning of Boston College in Massachusetts. She is working on a new book, “Composting Guilt: The Purification of Memory after Atrocity," and this fall, edited the academic journal Crosscurrents (Vol. 69, Issue 3).
You must log in or register to reply here.
Share:
Facebook Twitter Reddit Pinterest Tumblr WhatsApp Email Link
Top