Quran 11:59. That was Aad; they denied the signs of their Lord, and defied His messengers, and followed the lead of every stubborn tyrant.​
​
60. And they were pursued by a curse in this world, and on the Day of Resurrection. Indeed, Aad blasphemed against their Lord—so away with Aad, the people of Hud.​
​
61. And to Thamood, their brother Saleh. He said, “O my people, worship God, you have no god other than Him. He initiated you from the earth, and settled you in it. So seek His forgiveness, and repent to Him. My Lord is Near and Responsive.”​
​
62. They said, “O Saleh, we had hopes in you before this. Are you trying to prevent us from worshiping what our parents worship? We are in serious doubt regarding what you are calling us to.”​
​
63. He said, “O my people, have you considered? If I stand upon clear evidence from my Lord, and He has given me mercy from Him, who would protect me from God, if I disobeyed Him? You add nothing for me except loss.”​
​
64. “O my people, this is the she-camel of God, a sign for you. Let her graze on God’s land, and do not harm her, lest an imminent punishment overtakes you.”​
​
65. But they hamstrung her, and so He said, “Enjoy yourselves in your homes for three days. This is a prophecy that is infallible.”​
​
66. Then, when Our command came, We saved Saleh and those who believed with him, by a mercy from Us, from the disgrace of that day. Your Lord is the Strong, the Mighty.​
​
67. And the Scream struck those who transgressed, and they became motionless bodies in their homes.​
​
68. As if they had never prospered therein. Indeed, Thamood rejected their Lord, so away with Thamood.​
This is from the commentary.


Compare Gen. 18:1– 7. According to the Bible (Gen. 18:8), they ate the roasted calf and other food provided by Abraham. But the contrary, as Rodwell notes, was maintained by the Rabbins, and he directs attention to Is. Baba Mezia, “They made as though they ate”. Whether they were angels or men, is not made clear here or anywhere else in the Holy Qur’ån. But owing to the fact that they did not partake of food, and the fact that they brought to Abraham news of a son and of the destruction of Lot’s people, they are generally looked upon as angels who appeared in the similitude of men.​ 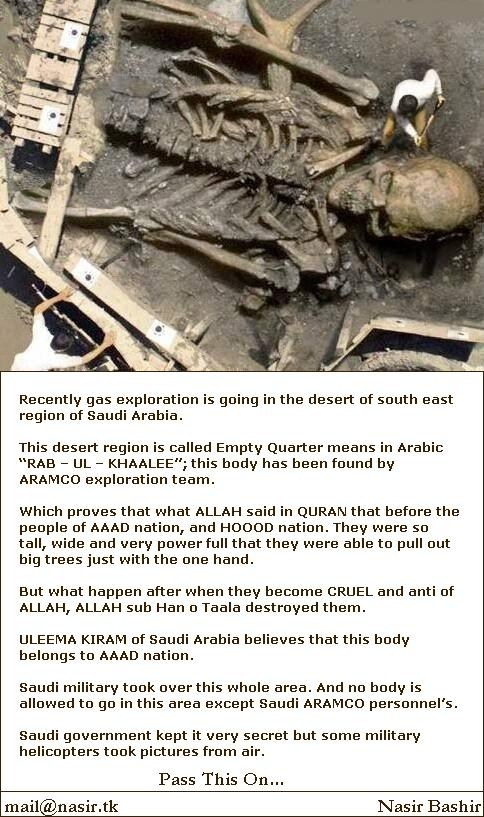 Some time ago, when I was going through the Bible chapter by chapter.... I came across these giants in the Bible. Now I see them in the Quran.

In Genesis 6 the Nephilim showed up in the Bible. They were giant! They were also "wicked" and God really needed to get rid of them.

Apparently, Aad and Thamood were two towns who just would not listen. They didn't trust Hud or his message. On earth's timeline... this was after the flood and about the time of Sodom. Hud was trying to convince the giants at Aad and Thamood to trust God. He offered them peace, apparently. He brought up the she-camel..... good grazing.... anyone knows good grazing is only available in a peaceful setting. All they had to do was worship the One True Living God.

They wouldn't listen.... so.... like Sodom and Gomorrah.... those towns of Aad and Thamood, along with all the ignorant humans in them.... got wiped out.