PREMO Member
The Washington Redskins will conduct a “thorough review” of its name as the organization faces immense pressure to change its moniker over racial connotations.

The team released a statement on the issue Friday.


The survey of 500 self-identified Native Americans found “68 percent of the respondents were not offended by the team’s name.” When the survey offered respondents “with more than 40 emotions and asked them to indicate whether each represented how they felt about the team’s name,” Vargas said, “The word picked most was ‘proud.'”

But Nike knows better. The company, under the direction of very white leadership (the president and CEO is a Democratic donor), removed Redskins gear from its website this week. Investment firms and shareholders have signed letters asking affiliated corporations to use their financial power to pressure the team into a name change. FedEx, which has naming rights to the Redskins’ field, responded by requesting the change.

A wave of new research indicates enough consumers will reward brands for taking leftist stances that it justifies wading into these fraught cultural conversations. Reporting on a survey last summer, Axios wrote, “When it comes to taking a stand on issues, younger, liberal Americans are more likely to want corporations to get involved, according to the poll. This is why brands like Nike that cater to younger, more diverse customers have chosen to take strong stands on social issues.” In June, Sara Fischer reported, “Data shows that brands have less to lose when speaking out on issues such as civil rights and gay rights than they would when speaking out against other hot-button issues, like abortion or guns.”

Meh, shouldn't they be the Maryland Landovers??? Mascot being a street urchin beating up a old lady?
T

Think out of the box. They should leave the name alone. Change the logo. To a potato. The Washington Redskin (potatos) They can sell a lot of gear in another losing season. Mr Potatohead can be the mascot.
D 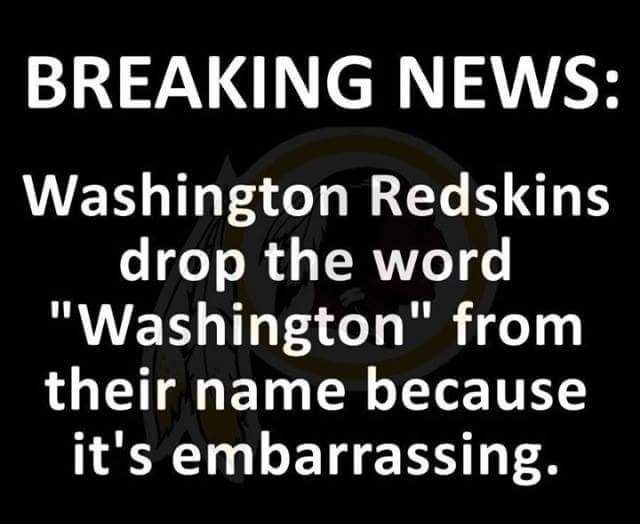 Hmmmmmm. I wonder if the team, more than 50% un-white, likes working for the Jewish boss man....
D

How about naming the team based upon their actual location: Landover

Thats it, nothing more.

Their helmets would just have a big "L" on them.
H

DaSDGuy said:
How about naming the team based upon their actual location: Landover

Thats it, nothing more.

Their helmets would just have a big "L" on them.
Click to expand...

This ... sadly this fits too well.

Phuck em all, 32 plane mid air collision would fix it.


An Amazon spokesperson confirmed the company is removing Redskins merchandise.

“With the announcement from the Washington team and the NFL, we are removing products with the team’s name and logo from our stores,” according to the notice, which was shared by Ed Rosenberg, who runs an online seller group called ASGTG. “Failure to properly close or delete all restricted product listings from your inventory may result in deactivation.”

The decision comes after the Washington Redskins said last week it would be reviewing its name after several sponsors, including FedEx, called on the team to rebrand itself.

FedEx bought naming rights to the team’s home stadium, FedEx Field, in 1998 for $205 million in a deal that runs through 2025. Frederick Smith, FedEx CEO, is a minority owner of the team.

PREMO Member
ESPN is reporting that the Washington football team can retain the Redskins name. Only if Dan Snyder sells the team to a native American tribe for $24 worth of animal pelts and shiny beads.
C

Good. It’s well beyond time they change their name.

They should be trendsetters and just take a knee to quit the league.

GregV814 said:
Hmmmmmm. I wonder if the team, more than 50% un-white, likes working for the Jewish boss man....
Click to expand...