So I'm digging around in the basement, and I come across a box, didn't recognize it. There were 10 solar panels in it, roughly 6"x12" each. Made by a company called Chronar, went defunct around 1990. Huh. I bought these as a closeout at Sears Surplus back in the late '80s for about $2 each. They were designed to be plugged into your car cig lighter to keep a battery peaked up, each one came with plugs, 12V adapters, wire, mounting hardware... Amorphous solar cells. Never got around to doing anything with them, but I now have a need. I was going to buy the 100W panel system from Harbor Freight to charge things when I'm camping. These will probably do the job just fine. All I need is a solar charge regulator to tie them together.

One of these days if the sun ever comes out, I'll run some tests on them, see what kind of volts/amps I can get. Seems to me I did a voltage test on them when I bought them, and each panel was vastly different.

I'm thinking it's time to go thru the basement and do a big purge......

PREMO Member
You got any forgotten about fishing lures in there?

No, sorry. My dad had tons of stuff, poles, tackle.... it all went to my brother in NC.

GWguy said:
One of these days if the sun ever comes out, ....
Click to expand...

Sorry, don't think this is going to happen.

Well, tried to play around with these. Being amorphous panels, they will generate power even on cloudy days. Some panels put out 12-13VDC (unloaded). Others between 5 and 10. One panel had no output until I twisted the frame a bit, then it read 13VDC. Opened it up. Bad connections to the back of the cell. Reading right off the cell it's 15VDC.

So, I'm thinking the other panels just have poor connections too. Problem is.... it's next to impossible to solder anything to the silver backing. I tried, and was not successful, and I've been soldering since I was 10. So, unless someone out there is really good at solding connections to solar panels and willing to help me out, I'm going to keep the 3 or 4 panels that works, and toss the rest. Might be worth the cost to buy a new turnkey system. Didn't cost me much, so no great loss.

Hmmm. Not entirely convinced that would work, but I'll do some research. Thanx!

Low voltage, low current. Foil tape would probably work. Super glue a penny & it would carry whatever that lil' panel will put out.

Blister said:
Low voltage, low current. Foil tape would probably work. Super glue a penny & it would carry whatever that lil' panel will put out.
Click to expand...

Less about the current and more about not pulling apart under stress. The panels will be subject to a lot of knocking and banging around.

Chronar thinfilm 6 inch X 12 inch solar panel I bought from a surplus dealer and data from my voltage and current measurements.

Should be able to wire two in series for a light battery tender, or wire a few in series/parallel for a bit more charging.

So, on to phase two. Ditch the Chronar panels. Free, if anyone wants them.

I've been watching A LOT of YouTube videos on standalone solar power generation. Lots of new tech out there that I kinda knew about, but wasn't up on. Not much change in solar panels themselves, but the cost is coming down. One of the newer selling items is a "solar generator". Not really a generator at all, just a battery, inverter and multi-input charger all packaged in a single carry box. Some are pretty impressive, running lots of high wattage 110VAC items, and with newer battery technology, run times between recharges are improving. And they can be recharged from solar, 12V car plugs, wind.... Designed for very simple plug-in-turn-on use.

But they want BIG $$ for these. Decided after watching all these vids that I'm going to create my own system (not a "generator") from scratch, primarily for camping in a pop-up that has no power/heat/water...
First order of business... batteries. I need LED lighting, inside and out, and recharge my cell phone and laptop. I can do that with just batteries, and run them until depleated. If I'm going the solar panel/inverter route eventually, I want the best batteries I can get.

Lead acid batteries are the least expensive, but also have the most drawbacks. I've learned that they only can produce 50% of the rated AmpHours (Ah) stated. Add a cold day, and it gets worse. Life expectancy is low, couple of years. So if you have a large bank of these, you pay more in the long run for less capacity. Lithium Ion are better. Better yet are Lithium Iron Phosphate (LiFePO4), current state of the battery art. But holy cow pricey. Almost $1K for a 100Ah 12V battery (car batteries run under 100Ah typically, not to be confused with ColdCrankAmps (CCA) which run 500 to 1000A typically). This is from an AutoCraft Platinum AGM Battery, Group Size H7, 850 CCA 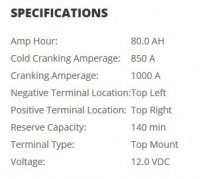 So, I did a lot of research. Imagine my surprise when I found an outfit in China selling a 120Ah LiFePO4 battery, designed specifically for solar use in electric bicylces for under $100. Even comes with a charger. Hmmmm...... too good to be true? Quite possibly... but decided to give it a go. Not much lost if it doesn't work out, and if it does, I've just saved THOUSANDS. So after a half dozen phone calls with the Credit Union and my MasterCard, I finally got unblocked and authorized to make a purchase in China. Free shipping from China!! WOOHOO!! Yeah, I won't be surprised if I get burned, but it was worth the try! I ordered 5, so at 120Ah times 5 batteries times12V, that's 7200 WattHours of power available, not accounting for typical losses in wire resistance, conversion, etc... That's a lot of LED lights and cell phone recharges. Should run an inverter for quite a while.

I plan on running a series of tests on these batteries, just to see if they can actually output 120Ah.

I'll post back as things happen, which may be infrequently. I have lots of other things going on.
C

Sure you already know this, LIPO batteries aren't quite as energy dense as LION, but are less of a fire/puncture risk. If you want the most life out of them, don't discharge below 20% and don't float charge them (ideally stop charge at 80%).

Depending on how tech savvy you are you can figure out out yourself. You can run the battery empty one time and then charge to 100%.. Then do linear discharge (1/10 rated capacity is usually good) to determine actual AH rating (again tracking voltage). Then look at what voltage you had when you were approximately 80% and 20% full. Buy a charge controller with a low and high cut-off voltages and set it to those values.

And any significant load on the battery will warm it up straight away, so no real risk of loss of capacity because its too cold out (unless you are using a 120AH battery to charge your fitbit, in which case you only get 1k charges instead of 2k).

Yup. All gleaned info from the vids, although I already knew how to test the battery.

Although, I saw nothing on stopping LiFePO battery charge at 80%. Everything, including manufacturer vids, charged to 100%. I just hit up Google and didn't see anything about it there either.

And yes, sacrificing the power density of the LiON battery for the safety of the LiFePO4.
Last edited: Mar 4, 2019

So........ yeah. Too good to be true. After the sale finally went thru and they charged my card, I get an email. They need more information to confirm my authenticity.

Every thing they asked for I would never give out. Even if I could, the buttons to browse and include documents to send don't seem to work. And they have a PM, but is seems to be one way only, you can't respond. I sent an email requesting cancellation and get an immediate canned reply on a dozen different scenarios, one of which is how to cancel and get a credit. Guess what... you have to attach a copy of the same things they asked for in the authentication.

Opened a discrepancy with my credit card company.

Rats. Back to looking for batteries.

PREMO Member
We've got a consultant working on the design and procurement of a hybrid power generation system, roughly 15kw peak capacity on batteries, for the island I manage. It's solar + wind + diesel generator. I'll ask him what their current favorite battery choices are.

Thanx. I thought about your Island, but figured the scale of implementation was so far beyond mine that there wouldn't be a down-scale to fit.
C

GWguy said:
Although, I saw nothing on stopping LiFePO battery charge at 80%. Everything, including manufacturer vids, charged to 100%. I just hit up Google and didn't see anything about it there either.
Click to expand...

"Lithium-ion suffers from stress when exposed to heat, so does keeping a cell at a high charge voltage. A battery dwelling above 30°C (86°F) is considered elevated temperature and for most Li-ion a voltage above 4.10V/cell is deemed as high voltage. Exposing the battery to high temperature and dwelling in a full state-of-charge for an extended time can be more stressful than cycling. Table 3 demonstrates capacity loss as a function of temperature and SoC. "

From BatteryUniversity. They use the term lithium-ion generically for all popular battery chemistries that uses lithium in the anode (so Lithium Ion, and Lithium Ion Polymer).

As the batteries charge increases so does it's internal resistance, and as the resistance increases more energy is wasted as heat. And heat kills the battery. The table shows that in their testing they got a 50% increase in the number of charge cycles by only charging to 80%.
You must log in or register to reply here.
Share:
Facebook Twitter Reddit Pinterest Tumblr WhatsApp Email Link
Top