Alpert Schreyer Trial Attorneys
Five Maryland locations to serve you. Personal Injury, Criminal Defense, DUI Defense.
On September 19 at 4:15 p.m., officers were searching the Bryans Road area for a suspect wanted in connection with several violent domestic-related assaults in which the suspect used a firearm to pistol-whip the victim and threaten her. The suspect, Branden Alfred Holland, 23, of Indian Head, was observed in a truck in the 6900 block of Indian Head Highway where officers were able to safely apprehend him. A search incident to arrest revealed two loaded firearms in the vehicle: one was a polymer “ghost” gun – meaning it did not have a serial number–and the other was a 9mm handgun that had been reported stolen from another state.

Holland was charged in connection with attacking a female acquaintance during which he threw her to the ground, drug her across asphalt, pistol-whipped her and pointed a firearm at her threatening to shoot her. She was able to break free and run for help. Holland fled the scene. Officers obtained an arrest warrant for first-degree assault and other charges.

At the time of this arrest, Holland was out of jail on a $10K bond stemming from an illegal handgun possession charge which violated his probation conditions from an armed robbery case in 2019. Holland was charged with first-degree assault, second-degree assault, illegal possession of firearms, false imprisonment, malicious destruction, and failure to appear. On September 20, a judge ordered Holland be held at the Charles County Detention Center without bond. 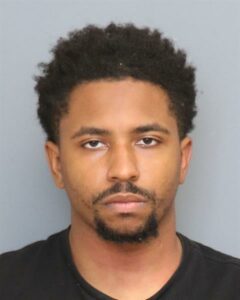