The Dr. James A. Forrest Career & Technology Center is home to 22 completer programs, four elective classes and one student run Internet radio station. In late November 2014, the school launched TC Radio as part of the school’s TV/Video Production program and Radio/Audio Production elective class. In the five months that followed, they’ve slowly added to the station’s playlist of music and schedule of student produced radio shows.

Eric Millham, the Forrest Center’s TV/Video Production instructor, is the station manager and advisor for TC Radio. He’s happy to see the station become a reality, “we’ve talked about starting a student radio station here for at least five years. The costs to start up an Internet radio station have come down to the point that we were finally able to afford it.” The station is part of the Live365 radio network, which provides station-hosting services to hundreds of Internet radio stations from around the world.

Millham isn’t the only one who’s excited to see the station go “on the air.” Colin McDaniel, a senior from Great Mills High School who completed the two-year TV/Video Production program last year and has returned for a “third year/directed study” class, is the station’s program director. “I was excited, I was very excited. I saw it as an opportunity to gain more knowledge about the radio industry. In my current job I’m dealing with live events and the on-air staff but with this, I’m dealing with getting shows on the air and all the behind the scenes stuff, including maintaining the music library.” The current job he refers to is as a part-time board operator with Somar Communications- WSMD 98.3 Star FM, Country 102.9 WKIK AM&FM, WMDM 97.7 The Rocket and 1690 AM WPTX.

McDaniel feels there’s a lot to be proud of in the first few months TC Radio has been on the air. “I take pride in helping it get off the ground and to now see how far it has come in just a few months. I’m also excited for it to become a reality for Mr. Millham. It has gone from something we were talking about two years ago to being on the air.” As he wraps up his time as a Forrest Center student, McDaniel is looking forward to attending a trade school to study Digital Audio Production. He wants to pursue a career in radio broadcasting, in particular in sports radio.

Chopticon High School senior Keilan Ruppert, who is in his second year in the TV/Video Production program, is the host of “The Keichainz Show” which is hosted by his alter ego “Keichainz.” He feels his show “was an opportunity to display my musical tastes, the songs that I like.” Ruppert said he listened to his show at home the day after it first aired. His mom heard some of the show while he was listening and thought it was funny hearing him do his “Keichainz” voice. He says, “It was cool being part of the process of making a radio show. It takes a long time, too.” Even though it took longer than expected to make the show he thinks the process wasn’t difficult, “I don’t think it was necessarily hard.”

After he graduates, Ruppert is planning to pursue a Music Production and Recording Technology degree at Salisbury University. He has made the most of his opportunities to prepare himself for his next step. For his senior project in his TV/Video class, he produced a “Keichainz” EP with beats and music he created. Actually, he started making beats and music at home and at school about a year ago when he started at the Forrest Center. You can hear many of his creations on SoundCloud. Once you go to the SoundCloud site just search for “Keichainz.” Ruppert’s musical talent goes beyond just electronic music. He is also a drummer and frequently plays drums in the praise band at First Saint’s Community Church in Leonardtown.

Aris Jordan is a junior at Leonardtown High School and in the center’s Culinary Arts I class. She has taken advantage of the opportunity to create a radio show. “I saw it on the marquee and thought, ‘I like to talk,’ so I wanted to know if anyone could do a show or just that class. I asked my teacher, Chef Granados, and she sent me to Mr. Millham. He said, ‘yes,’ any Forrest Center student could do a show.” Jordan has enjoyed the experience making her first show. “It’s been great. You can talk about just about anything you like. You can be open and have your own spin on things.” She will return next year to complete Culinary Arts II and wants to continue making shows for TC Radio. “It’s a great opportunity and I want to do it as much as possible.”

St. Mary’s County high school students who are interested in being part of TC Radio but aren’t currently a Forrest Center student may want to consider taking the school’s Radio/Audio Production elective class, which is open to students in grades 10-12. Millham says the class still has a few open seats for next school year but he expects all seats to be filled by the time school starts again in August. Interested students simply need to see their school counselor or contact the Forrest Center’s counselor, Diana Kraft, to fill out a Forrest Center elective application.

Radio/Audio Production is a renamed, reworked version of an elective previously offered at the center. Students in the class are introduced to podcasting, Internet radio, sound effects and radio theatre/audio plays. They experience hands-on learning in radio announcing, scriptwriting, voice acting, creating sound effects and audio mixing. A variety of industry standard programs and equipment are used to create projects. No prior experience is required. The class can be taken for one or both semesters and may be repeated for credit.

With all the changes to the radio industry, Millham says podcasting and Internet radio are the “new radio.” He said there have been a number of articles in the news over the last year or so that indicate podcasting is having a revival of sorts. “Professional podcasters are now making good money and we wanted to offer a class that gives students the chance to experience podcasting. High school students have a voice. I’m always impressed with their creativity, at what they tune into and how much they grasp about subjects that grab their attention. I hope to teach them how to share their knowledge, research, opinions and creativity through podcasting and Internet radio.”

Leonardtown High School sophomore Jordan Willis is in Millham’s elective class. Her “Hit The Lights” podcasts can be found on the podcast-hosting site Podbean.com. “It’s actually really fun. It gives us good experience editing, putting stuff up there and seeing the responses people give us.” Willis, who will be entering the Forrest Center’s Graphic Communications program next year, plans to continue podcasting, “There’s a lot more stuff happening in the entertainment world I can talk about. I do have listeners so I’d like to continue keeping them informed.”

Of TC Radio, Millham says the station is still a bit “in development.” He wants to see enough radio shows on the schedule so there aren’t any repeats each week. He has also offered to make the station available, if needed, to the school system’s Safety and Security office. “We have access to a way of doing active updates on the station during our regular, pre-recorded student shows as well as the ability to do live shows. These features could be used during an emergency to help the school system communicate with our parents and community.”

If student interest is strong enough and time permits, Millham says he could see the station doing live shows during school events and maybe even doing live sports in the future. “Of course, we’d need a strong play-by-play announcer.” He says the biggest obstacle to doing live broadcasts is the need for a strong Internet connection.

To listen to TC Radio, go to www.live365.com/stations/tcradio. For more information about the Forrest Center and the programs and electives offered there, visit the school’s website at http://schools.smcps.org/tech/.

Colin McDaniel takes a break from his program director duties for TC Radio, the student run Internet radio station at the Forrest Center. 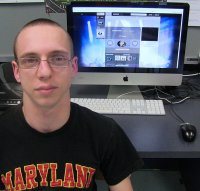 Aris Jordan hard at work in her Culinary Arts I class. Her show, “On The Air with Aris” includes music, jokes, trivia and fun facts. 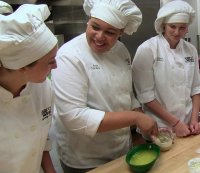 Jordan Willis is editing audio for her latest podcast using Adobe Audition during her class at the Forrest Center.