The First Counterspy: Larry Haas, Bell Aircraft, and the FBI's Attempt to Capture a Soviet Mole 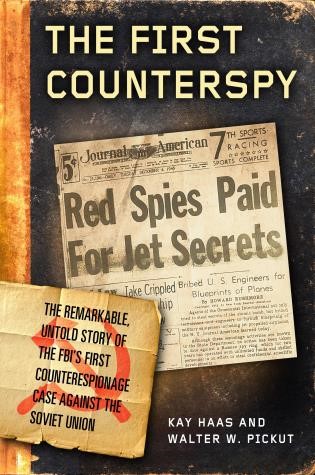 Lyons Press is proud to announce the May 2022 release of The First Counterspy (400 pages • 978-1-4930-6156-3 • $29.95 • Hardback) by Kay Haas and Walter W. Pickut. The First Counterspy is the pulse-quickening and traumatic story of spy, counterspy, and an American family unwittingly caught in its web. Until this case, the FBI had never recruited civilian counterspies to catch a Soviet agent. The first two were Larry Haas, a leading aviation engineer at Bell Aviation, and Leona Franey, head librarian at Bell’s technical library. The FBI pitted them against a Soviet agent, Andrei Ivanovich Schevchenko, operating legally as one of the highest Soviet officials in the United States during WWII, and illegally as the secret head of a wide-ranging spy network hidden within the American aviation industry.

The First Counterspy lays out this exciting story and, later, the consequences of Schevchenko’s deadly threat of vengeance against Haas, the counterspy who betrayed him. The threat was uttered in a mere fourteen seconds but generated lethal consequences that long outlived Schevchenko, tormented Larry Haas, killed his wife, and subjected his daughter, Kay (the co-author of this book), to decades of nearly fatal harassment.

And thereby hangs a tale of spy vs. spy intrigue against the backdrop of the home front during World War II.

Kay Haas is Larry Haas’s elder daughter. Her early years were fraught with disruptions caused by her father’s work and her mother’s death at the hands of Soviet agents. Kay later traveled widely and became a renowned and commercially successful stained-glass artist creating entire suites of church windows, elegant chandeliers, and decorative and artistic displays. She has raised five children over a span of twenty-five years, and at the age of 80 is married to her third husband, a retired pastor. She now lives in a secluded, forest village in rural New York State.

Walter Pickut is a freelance writer and the founding editor (now contributing editor) of the Jamestown Gazette, a Western New York and Northwest Pennsylvania regional weekly newspaper, now entering its tenth year of publication. He lives in Chautauqua County, New York, where he serves at the Martz-Kohl Astronomical Observatory to help fulfill their mission of research and public education about astronomy and space travel.

--- Are there really “legal spies?” Aren’t they all illegal?

Legal spies have real, legal work to do in the US, approved by the US government, for instance in education, industry, or diplomatic work. It is a cover for illegal, secret spycraft.

Illegal spies, on the other hand, are not even known to exist. They enter a country under cover and remain undetected to do their work.

--- Is it true that the FBI had no idea how to use a US civilian as a counterspy before they recruited Larry Haas? Why?

The FBI had never before recruited a US civilian to act as a counterspy against an enemy, especially difficult because the enemy was really an ally (the USSR) covertly acting against the US. They had no idea how to do it at first. They had to train a civilian to gain the trust of a trained Soviet agent and then act like he was spying against the US while gathering evidence against the spy. It was psychologically risky and dangerous, hard for FBI novices to learn, teach a civilian, and manage for the first time ever.

--- Why hasn’t anybody heard of the Haas/Schevchenko case before?

J. Edgar Hoover considered this case an embarrassing failure. His own government thwarted his effort to nab one of the Soviet Union’s top officials in the act of spying. Historians knew only fragments of the real story. Kay Haas, Larry Haas’s daughter—the last person alive who knows it—worked for years to finally get the records released to her.

--- Why did Kay Haas want this book written?

To fulfill her father, Larry Haas’s, dying wish. On his deathbed he told Kay it was time the world knew his too-long-secret story. Kay promised to do it. THE FIRST COUNTERSPY fulfills that promise.

We Don’t! There was a legal spy aircraft engineer who used that name, but aliases were often used by Soviets in the US. We only use that name because we can’t prove otherwise. Many similar cases are known in Soviet spycraft.

--- What’s it like to live in hiding most of your life?

Kay Haas lived under 24/7/365 guard for the first 23 years of her life because her father’s work exposed her to his enemies. Later, she moved to an unknown, rural location with her husband, almost as isolated as one in a witness protection program. A constant undercurrent of danger dogged her for years.

--- Why would the Joint Chiefs and the US Government block prosecute of a dangerous Soviet spy when the FBI had an air-tight case on the spy?

If the US prosecuted Schevchenko (embarrassing its ally, the USSR) it would have risked destabilized both European and Pacific post-war realignment of world powers.

--- What kind of spy was Andrei Schevchenko?

He was once called “the most dangerous Soviet agent ever sent to America.” However, he was by nature a scientist, unsuited by temperament and training, to espionage. This ultimately led to his failure as a spy.

--- What made Soviet spies different from other spies in WWII?

The USSR was an ally within the Allied Powers while Germany, Japan, and Italy were enemies. Many in the US government were friendly, even admiring, of the USSR in the 1940s. Even Roosevelt mostly denied their existence. Top US officials did not support counterespionage against friends.

---What do MICE have to do with espionage?

The classical tools of subversion used by spies include Money, Ideology, Compromise, and either Ego or Extortion.

--- How does seduction work in spycraft?

A spy tries to seduce a subagent to help him/her by befriending a target using money or rewards, or by proselytizing for the spy’s ideology or out of a thirst for adventure to create a willing ally. Next, after inducing one to divulge classified information, the subagent, if necessary, can then be forced into further compliance under threat of exposure or death.

He didn’t like the idea, possibility, and potential power of an independent, uncontrolled secret police entity within the government. He would not even interact personally with Hoover unless absolutely necessary.

--- Who really invented jet power if not the USA?

Within only about 20 years of the Wright Brothers creation of heavier-than-air flight, scientists in Russia, Italy, Japan, and England were developing jet power. The US considered it useless and came late to the game only after Germany and England created their own jet fighters in WWII.

--- How did Roosevelt’s death make the FBI’s work even harder?

Hoover had created his own FBI mini-empire under FDR through mutual dependance. Truman owed no such allegiances to Hoover.

--- What does the Haas/Schevchenko case say about how to listen to newscasts today?

The news usually presents only a plausible explanation for events but almost never fully exposes all of the underlying realities of power, intrigue, quid-pro-quo, entangling alliances, hidden agendas and unintended consequences. Understanding THE FIRST COUNTERSPY case provides an informative lens through which to examine today’s geopolitics.

--- What is it like writing a book for someone else who experienced the events?