The Hacking Evidence Against Russia Is Extremely Weak

The Hacking Evidence Against Russia Is Extremely Weak


1/ The DNC hackers inserted the name of the founder of Russian intelligence, in Russian, in the metadata of the hacked documents. Why would the G.R.U., Russian military intelligence do that?

3/ Why would Russian intelligence, for the purposes of hacking the election systems of Arizona and Illinois, book space on a Russian-owned server and then use only English, as documents furnished by Vladimir Fomenko, proprietor of Kings Servers, the company that owned the server in question, clearly indicate?

4/ Numerous reports ascribe the hacks to hacking groups known as APT 28 or “Fancy Bear” and APT 29 or “Cozy Bear.” But these groups had already been accused of nefarious actions on behalf of Russian intelligence prior to the hacks under discussion. Why would the Kremlin and its intelligence agencies select well-known groups to conduct a regime-change operation on the most powerful country on earth?

5/ It has been reported in the New York Times, without attribution, that U.S. intelligence has identified specific G.R.U. officials who directed the hacking. Is this true, and if so, please provide details (Witness should be sworn)

6/ The joint statement issued by the DNI and DHS on October 7 2016 confirmed that US intelligence had no evidence of official Russian involvement in the leak of hacked documents to Wikileaks, etc, saying only that the leaks were “consistent with the methods and motivations of Russian-directed efforts.” Has the US acquired any evidence whatsoever since that time regarding Russian involvement in the leaks?
Click to expand...

Near as I can tell there was no "hacking" involved.

I honestly believe that anyone using the word "hack" to describe what went on is deliberately misrepresenting the story, by trying to imply to the casual reader (read: the vast majority of the American Public) that Russian spies, infiltrated vote counting machines and either changed votes, or appended/deleted votes to turn the results to their favor. 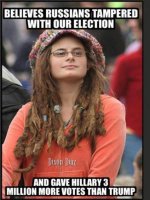 Toxick said:
Near as I can tell there was no "hacking" involved.

it was all insider leaks ..... but that would not fit the narrative that Trump is illegitimate and not fit to be President
- as well as nothing the DNC Operatives did to sink Sanders and promote Clinton was unethical
- or the Conclusion with the State Run Media


In 1967, the CIA Created the Label "Conspiracy Theorists" ... to Attack Anyone Who Challenges the "Official" Narrative


Summarizing the tactics which the CIA dispatch recommended:

In other words, the CIA’s clandestine services unit created the arguments for attacking conspiracy theories as unreliable in the 1960s as part of its psychological warfare operations.

Toxick said:
Near as I can tell there was no "hacking" involved.

I honestly believe that anyone using the word "hack" to describe what went on is deliberately misrepresenting the story, by trying to imply to the casual reader (read: the vast majority of the American Public) that Russian spies, infiltrated vote counting machines and either changed votes, or appended/deleted votes to turn the results to their favor.

It is disgusting, and easily refuted with both logic and facts. But that is the new reality - if a lie is told often enough, and enough people believe it, it becomes the truth. They really don't even know what they believe because the story has been changed and massaged so often.

Anyone who thinks the Russians hacked into our voting machines and changed votes to favor Donald Trump is a ####ing idiot.

If they think Russians hacked into DNC computers and revealed unscrupulous information about Hillary Clinton, and they are more outraged by the "hacking" than the information revealed, they are ####ing idiots.

If they think Trump should declare war on the Russians, even though he's not even president yet, they are (you guessed it) ####ing idiots.

If they want to call me a ####ing idiot, they should go on FB and see all the mathy order of operations problems I consistently get wrong. Regarding our current political situation, however, they are having the order of operations dysfunction, not me.

George, in this case...after considering how many others have verified/repeated the same thing, including Assange himself. Ole Hil was done in by someone inside..someone disgusted with all the slimeball tactics and dirty tricks.

Besides..the CIA has provided zippy details...so there is nothing to believe, or not.

Gilligan said:
Besides..the CIA has provided zippy details...so there is nothing to believe, or not.
Click to expand...

NO ONE has .... it is all conjecture none of the 17 Intelligence Agencies [from the latest Bong Boy Posts]
but as the 6 questions point - would the Russians really be this Obvious
but I'll take answers to # 5

PREMO Member
As reported by The Nation, VIPS has a well-established record of debunking questionable intelligence assessments that have been slanted to serve political purposes. For example, in the run-up to the U.S. invasion of Iraq, VIPS courageously and correctly challenged the accuracy and veracity of the CIA’s intelligence estimates that Saddam Hussein possessed weapons of mass destruction and posed a threat to the United States. Similarly, VIPS has condemned the use of “enhanced interrogation techniques” on suspected terrorists. In short, VIPS can hardly be described as either a right-wing cabal or as carrying water for the Republican Party.

In its analysis of the purported DNC hack, VIPS brought to bear the impressive talents of more than a dozen experienced, well-credentialed experts, including William Binney, a former NSA technical director and cofounder of the NSA’s Signals Intelligence Automation Research Center; Edward Loomis, former NSA technical director for the Office of Signals Processing; and Skip Folden, a former IBM information technology manager. As the French would say, these are l’hommes serieux.

As set forth in the article, VIPS’ investigative findings were nothing short of stunning. First, VIPS concluded that the DNC data were not hacked by the Russians or anyone else accessing the server over the Internet. Instead, the data were downloaded into a thumb drive or similar portable storage device physically attached to the DNC server.

The time stamps contained in the released computer files’ metadata establish that, at 6:45 p.m. July 5, 2016, 1,976 megabytes (not megabits) of data were downloaded from the DNC’s server. This took 87 seconds, which means the transfer rate was 22.7 megabytes per second, a speed, according to VIPS, that “is much faster than what is physically possible with a hack.” Such a speed is accomplished by directly connecting a portable storage device to the server. Accordingly, VIPS concluded that the DNC data theft was an inside job by someone with physical access to the server.

VIPS also found that, if there had been a hack, the NSA would have a record of it that could quickly be retrieved and produced. But no such evidence has been forthcoming. Can this be because no hack occurred?

Even more remarkable, the experts determined that the files Guccifer 2.0 released were “run, via ordinary cut and paste, through a template that effectively immersed them in what could plausibly be cast as Russian fingerprints.” In other words, the files were deliberately altered to give the false impression that they were hacked by Russian agents.

Thanks to the VIPS experts, the Russia-hacking claim — the lynchpin of the DNC’s lawsuit — appears to have been affirmatively and convincingly undercut.