PREMO Member
Is there a thread already for thoughts on books? Didn't see one so here's one.

PREMO Member
Patron
I just finished re-reading the Prey series, and am about 1 paragraph into a new book that I keep falling asleep while trying to read.

PREMO Member
First book I want to share is "American Insurgents, American Patriots: The Revolution of the People" by T.H. Breen.


Not an easy read; rather dry. But at least a 4.5 star book in that there is much to learn from this book about the two or so years before the signing of the Declaration of Independence. Really fascinating: Breen's thesis is that the Continental Congress didn't set the pace in the run-up to July 4, 1776; rather, it was playing catch-up to the prevailing sense/opinion across all thirteen colonies. Was floored to learn about the "Continental Association" and its effectiveness in response to the Coercive Acts (and how it worked as a "national government" of the colonies prior to an actual government (i.e., Articles of Confederation)).

The book is also interesting (worryingly so) due to some similarities we're seeing today (the 2A movement in Virginia to name a close and current example).

Worth the read if you're willing to put in the effort. End notes are also quite comprehensive and interesting.

I just finished “Blue Moon” by Lee Child which is a Jack Reacher novel. It is a pretty well paced book with plenty of action, a definite book for entertainment purposes. If Reacher could have a soft side it is exposed in this one.

There are only a few certainties in this life:
Taxes
Death
The Germans love David Hasselhoff
And
TOM CRUISE IS NOT Jack Reacher!

I just finished The Undoing Project by Michael Lewis, probably his best book yet. My takeaway: never trust your gut. We are almost always wrong.

For light reading, I just finished up a book called Poseidon’s Wake, the last in a trilogy by Alistair Reynolds. This is hard science fiction. If that’s your things, I recommend Reynolds, he’s a great writer of SF.

PREMO Member
I also just finished reading "Downfall: The End of the Japanese Empire" by Richard B. Frank.

In the run-up to the 50th anniversary to the dropping of the atomic bomb on Hiroshima the revisionist view (i.e., that the bombing was immoral, unethical, and unnecessary) gained a previously unseen level of support (which continues to this day).

Frank demolishes this revisionist view from (it seems to me) every perspective. Well-researched (using materials previously unavailable or poorly/sparsely reviewed) one cannot (if one chooses to be a grown-up about it) reject the view that the bombing was not only moral it was necessary. Why?

- Japanese leadership played a cynical game with its Ketsugo plan (which required mass kamikaze attacks and the complete commitment of the Japanese civilian population),

- U.S. public support for a continuing war in the Pacific was falling precipitously following V-E Day,

- U.S. military assumptions about the Japanese defense of Kyushu were criminally low,

- various senior U.S. leaders played games against each other to ensure their services would get the glory (e.g., MacArthur, King) and some (e.g., Marshall) knowingly mis-briefed (i.e., lied to) Truman,

- and alternative strategies offered up by U.S. senior military leaders would have caused not just millions of U.S. casualties, but also tens of millions of civilian casualties (Japanese, Chinese, Koreans, etc.).

Btw, Frank's case has been bolstered in recent years with newer material coming to light. A documentary in Japan (2010 or so) revealed (or at least pointed me to other research) that it was the second bomb (i.e., the plutonium bomb dropped (off-target) on Nagasaki that finally convinced Japanese leadership to sue for unconditional peace. Apparently, Japanese scientists didn't believe the U.S. had a functioning hydrogen-based atomic bomb, but after it was dropped thought the U.S. couldn't have many in stock because they rightly understood that hydrogen-based bombs were tricky to produce. The Japanese scientists also didn't believe a plutonium-based bomb was at all possible and were floored to learn that the Nagasaki bomb was plutonium-based. This info, coupled with "intel" gotten from a downed/captured P-51 pilot under torture (the pilot made up the entire story!) caused the Japanese to believe the U.S. had scores of plutonium bombs ready and waiting to be dropped (when, in fact, there was only one more available and enroute and others would have taken weeks/months to make/get in-theater/assemble).

(a) I just finished The Undoing Project by Michael Lewis, probably his best book yet. My takeaway: never trust your gut. We are almost always wrong.

(b) For light reading, I just finished up a book called Poseidon’s Wake, the last in a trilogy by Alistair Reynolds. This is hard science fiction. If that’s your things, I recommend Reynolds, he’s a great writer of SF.
Click to expand...

(a) Thanks for the tip. Will be getting it to read.... I have some pre-read thoughts, but will wait until reading to post (it will be interesting to see if my null hypothesis stands or falls).

(b) Re: light SF reading I'm waiting on the next chapter in "The Expanse" series, as well as the final volume in John Scalzi's "The Interdependency" series: "The Last Emperox." In the meantime, not SF, but am re-reading Joseph Kanon's "Defectors." Pretty much anything written by Scalzi and Kanon are worth the time.

Got two books on the "Great Automobile Race" up in the que next..the trans-continental adventure in the earliest automobiles. Before starting the "Home" survival series, I finished up a lengthy historical piece written specifically to exonerate Adm. Husband Kimmel for the blame unfairly laid on him for Pearl Harbor.

You know, I just can't. I used to look forward to the new Reacher novel but now all I see is Tom Cruise and I can't enjoy the books anymore. That mental image has completely changed the character for me.

Yooper said:
Interesting! Thanks for the tip.

Any recommendations as to order best to read the series? Or just get them as published chronologically?

You absolutely have to read them chronologically. My wife is my "book buyer"; I give her titles I find and want and she takes it from there. The majority she finds on Amazon.

Gilligan said:
You absolutely have to read them chronologically. My wife is my "book buyer"; I give her titles I find and want and she takes it from there. The majority she finds on Amazon.
Click to expand...

Thanks for the tip. I guess that would be "Going Home." Was confused because "Surviving Home" was shown on Amazon as the first published but second in the series. I'll start with "Going Home."

In the same vein, I enjoyed the "World Made by Hand" series by James Howard Kunstler. First is the best (especially from a TEOTWAWKI/TSHTF angle), but all four were quite enjoyable (each in its own way).

PREMO Member
For everyone....

On a separate note, how do "you" get your books and what do "you" do with them once finished?

Library or buy? If buy, hardback or paperback or digital ? (I like to buy, but my appetite exceeds my wallet. But if I'm not sure I try the library route first.... I prefer physical, but also have a substantial digital library.)

Once read, keep, sell, or donate? (For me, it depends. But I probably need to get rid of far more than I think I should.)

Does anyone mark up a book or dog-ear the pages? (I do the former (mostly non-fiction, though); I loathe the latter!)

I buy a fair amount on Kindle as well


Yooper said:
Does anyone mark up a book or dog-ear the pages? (I do the former (mostly non-fiction, though); I loathe the latter!)
Click to expand...

On 2 dollar copies used From Amazon, I will never read again, I tear our one page at a time and toss the entire thing when finished 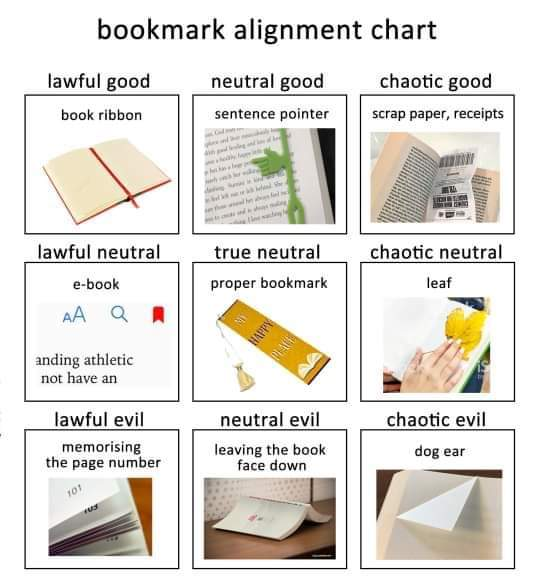 I mark up my books constantly, mostly I jot notes in the margins or circle words I had to look up.

I don’t dog ear pages as a matter of routine, but I am sure I have at some point. I have a bookshelf for my books and the one thing I always do is remove the cover from a hardback book and toss it. After a few years the paper cover looks like hell and drives me crazy so about 20 years ago I discovered this novel idea to this problem.

I usually purchase or I’m gifted my favorite authors or subjects. I have all the Brad Thor books, all the Tom Clancy novels and fair amount of Clive Cussler books. I do utilize the library and I’ve even succumbed to the evil known as the ebook. I’ve been a book printer for over 30 years so ebooks are end of the line for one facet of my life. I never EVER dog year a book to mark my place.

(a) Nothing like a physical book in the hand! Reluctantly, though, I have found a use and need for the ebook....
(b) That would be something I hope you can find a minute or two to write a bit about. I bet the process is quite interesting.
(c) I'm with you on that

Spitfire said:
...I always do is remove the cover from a hardback book and toss it. After a few years the paper cover looks like hell and drives me crazy....
Click to expand...

Yup, true. But for some reason I can't toss 'em.

PREMO Member
I have stack of paper covers from hard back books ..... that I will marry back up one day, when I finish the book