Tree Frog this isn't a tree

I went to put gas in my truck today, flipped the door open and there was a tree frog in there.

Do they change colors to match their surroundings? My truck is beige and the frog looked like the new digital dessert cammo.

PeoplesElbow said:
Do they change colors to match their surroundings?
Click to expand...

As the name implies, these frogs are typically found in trees or other high-growing vegetation. They do not normally descend to the ground, except to mate and spawn, though some build foam nests on leaves and rarely leave the trees at all as adults.

Many tree frogs can change their color for better camouflage. For instance, the grey tree frog (Hyla versicolor) can change its color from green to grey to yellow .[2]

Tree frogs are usually tiny, as their weight has to be carried by the branches and twigs in their habitats. While some reach 10 cm (4 in) or more, they are typically smaller and more slender than terrestrial frogs. Tree frogs typically have well-developed discs at the finger and toe tips; the fingers and toes themselves, as well as the limbs, tend to be rather small, resulting in a superior grasping ability. The genus Chiromantis of the Rhacophoridae is most extreme in this respect: it can oppose two fingers to the other two, resulting in a vise-like grip.
Click to expand...

Thought about keeping him as a pet but after he got on some glass his belly looked all oily and gross. 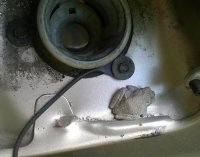