PREMO Member
Putin has sent has 100K+ troops into the fake separatist regions of Ukraine, and that’s bad. But the morphing of Canada into a fascist state before our eyes is exponentially worse. A garbage elite on our border – with the disgraceful support of 65% of American Democrats – has declared war upon the working class, outraged that mere peasants are refusing to submit to their betters. Due process, free speech, not beating the brains out of old ladies with walkers – these basics have gone by the wayside and our senile president, with his coterie of aspiring Castros – though Castro was potent enough to impregnate Trudeau’s trash mommy while our ruling class can’t make it happen unless they are on a Zoom call – have said nothing publicly. But privately, they are taking notes. They love the idea of criminalizing dissent – look at the January 6th witch trials – and they are taking notes.

But we cannot live under tyranny here. Canada is right next door, and this is a dress rehearsal for the kind of tyranny our own garbage ruling class would love to inflict here. Sadly, the majority of Canadians and their disgusting MPs seem to support treating the Anglo-Saxon legacy of human rights and democracy like Eric Swalwell treats his boxers after a chili cook-off. They have proven themselves unfit to be a free people and are happy to slide into serfdom.

I don’t care what happens to a bunch of maple leaf sissies who prefer a thug-powered nanny state that suppresses dissent and scoffs at due process. I do care that this constitutes inspiration to Democrats here at home. And for that reason, on Kurt’s “Things I Care About” chart, “Canadian Fascism” is number one with a bullet.

It is tougher but not impossible for this to happen here. We have protections and structures that will help prevent that from ever having to happen again, like the Constitution. Canada doesn’t. Nor does it have a heritage of freedom as we do. Canada is packed with the invertebrate descendants of the crown-groveling traitors who fled when we held our last revolution. Submission is in their blood but, we can hope, not ours. 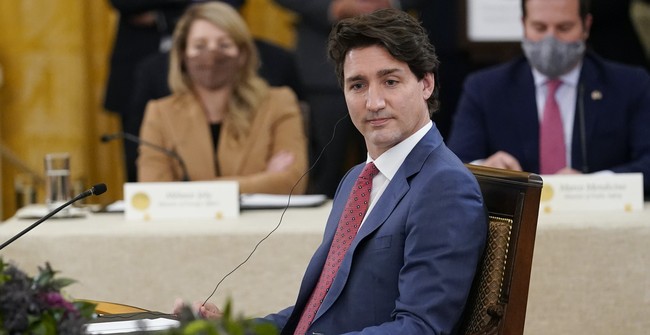 Great job, Oleg! You earned your ruble for the day.

GURPS said:
Canada is packed with the invertebrate descendants of the crown-groveling traitors who fled when we held our last revolution.
Click to expand...

HemiHauler said:
Great job, Oleg! You earned your ruble for the day.
Click to expand...

Pro-freedom Ontario politician arrested for his role in Freedom Convoy​

Hillier, an Independent Member of Provincial Parliament (MPP) in Ontario, surrendered to Ottawa Police on Monday morning after he said he was instructed to do so via phone call with police on Sunday. He has been outspoken against so-called COVID restrictions, including lockdowns and vaccine mandates, and supportive of the anti-COVID mandate Freedom Convoy protest that took place for three weeks in Ottawa’s downtown earlier this year.

According to the Canadian Broadcasting Corporation, Hillier’s charges are one count of assaulting a peace or public officer; two counts of obstructing or resisting a public officer; one count of obstructing or resisting someone aiding a public or peace officer; three counts of counseling an uncommitted indictable offense, two of them considered mischief; and two counts of mischief or obstructing property exceeding $5,000.
You must log in or register to reply here.
Share:
Facebook Twitter Reddit Pinterest Tumblr WhatsApp Email Share Link
Top