PREMO Member
Facebook told the AP that the global platform took down users promoting Museveni because the campaign “used fake and duplicate accounts to manage pages, comment on other people’s content, impersonate users, re-share posts in groups to make them appear more popular than they were. Given the impending election in Uganda, we moved quickly to investigate and take down this network.”

The censorship, however, prompted Museveni to implement a ban on all big tech operations in the African country as its voters head to the polls, concluding a campaign described by Reuters as wrought with intimidation and “marred by brutal crackdowns on opposition rallies that have left scores dead.” The president of Uganda temporarily banned Facebook and Twitter from the country this week in the final hours leading up to elections on Thursday. 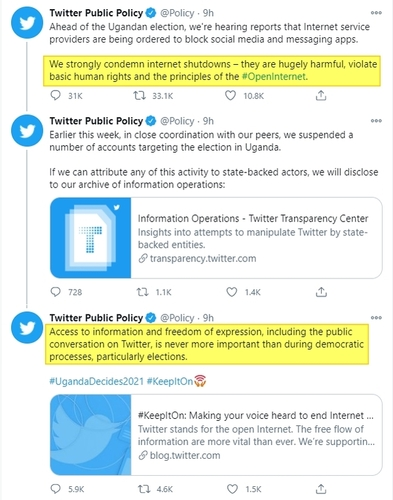 For a little context, this started because Twitter and Facebook were doing in Uganda what they did in America: using their immense power to put their jackboots on the scale to affect the election. Uganda, unlike the feckless Republicans, was not going to allow it: 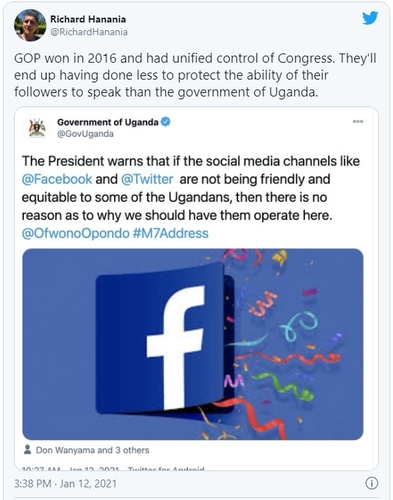 Twitter, as you saw, struck back. Once you're done laughing about the insane hypocrisy contained within those tweets, start thinking about the deeper implications of the above tweets. I'm not going to deny that Democrats are smart. They are.

Over the course of sixty years, accelerating in the last twenty years, and with warp speed in just the last four years, they have systematically moved themselves to the most powerful positions in every American institution, whether in politics, entertainment, education, the media, or the corporate world.

However, what we're seeing on Twitter is a problem that sometimes happens to apex predators: they get soft. Having vanquished most of their competition, for the last twenty years, leftists have created a very peculiar intellectual world.

All this and the demonization of anyone standing in their way is somewhat reminiscent of the movie Running Man, where Arnie is selectively edited to show bad intentions and the clip is fed to the mob to justify his impending fate.

HelloDave said:
All this and the demonization of anyone standing in their way is somewhat reminiscent of the movie Running Man, where Arnie is selectively edited to show bad intentions and the clip is fed to the mob to justify his impending fate.
Click to expand...

Interesting Analogy ..... the Tech exists now with Deep Fakes to do just that