PREMO Member
For example, you have denied the President the right to cross-examine witnesses, to call witnesses, to receive transcripts of testimony, to have access to evidence, to have counsel present, and many other basic rights guaranteed to all Americans. You have conducted your proceedings in secret. You have violated civil liberties and the separation of powers by threatening Executive Branch officials, claiming that you will seek to punish those who exercise fundamental constitutional rights and prerogatives. All of this violates the Constitution, the rule of law, and evey past precedent. Never before in our history has the House of Representatives-under the control of either political party-taken the American people down the dangerous path you seem determined to pursue.

Put simply, you seek to overturn the results of the 2016 election and deprive the American people of the President they have freely chosen. Many Democrats now apparently view impeachment not only as a means to undo the democratic results of the last election, but as a strategy to influence the next election, which is barely more than a year away. As one member of Congress explained, he is "concerned that ifwe don't impeach the President, he will get reelected."1 Your highly partisan and unconstitutional effort tlu·eatens grave and lasting damage to our democratic institutions, to our system of free elections, and to the American people.

Well, the brainless ones, Adam and Nancy, want to be famous like Joe McCathy.
T

Kinda helps if you read about the process....

Why don't you get This_person to explain it to you? He claims to be a Constitutional Scholar.

Or you could just go here: https://www.law.cornell.edu/constitution-conan/article-2/section-4/impeachment#fn839art2

And you would quickly understand that impeachment in the House is not a trial...the trial is in the Senate. But all you informed types already know that and are laughing at the silliness of Trump's attorneys. I will give them some credit...they wrote it for the educational level of their audience.

BTW...I wonder if the lawyers will get paid.

transporter said:
And you would quickly understand that impeachment in the House is not a trial...the trial is in the Senate.
Click to expand...

Amazing..you do read what others write here..I would guess that the above has been written here at least 100 times and it has finally sunk into your thick skull. So proud of you to have learned something.

PREMO Member
Thank you, @transporter, for the snark.

Your Cornell.edu links don't really say much about the process. The first link addresses only those who can be impeached along with some caveats. But it says nothing about the House process. The second link is just a regurgitation of a section of the Constitution. So not much help. It's almost as if you are trying to "persuade by volume."

I will grant you that the first sentence of @GURPS' snip is a bit "off." However, the remainder is pretty much spot-on (especially, "You have conducted your proceedings in secret"). As in, the House majority leadership is NOT following procedure for an impeachment; it is, in fact, trying to get the benefit of impeachment without actually working toward it.

The Method and History of the US Impeachment Process

Three U.S. presidents have been impeached. What is the impeachment process in US government, and what does it mean to be impeached?

In the House of Representatives

Is this the process being followed? Unless I'm mistaken, no. So, in essence, the President's lawyers are correct.

I get it; you hate Trump. Wish you would also hate the fundamentally dishonest campaign the Democrats have embarked upon. Or is it an "end justifies the means" thing for you?

Yooper said:
Your Cornell.edu links don't really say much about the process. The first link addresses only those who can be impeached along with some caveats. But it says nothing about the House proces The second link is just a regurgitation of a section of the Constitution. So not much help. It's almost as if you are trying to "persuade by volume."
Click to expand...

So Basically whining as usual without offering ANY Solutions or Points

GURPS said:
So Basically whining as usual without offering ANY Solutions or Points
Click to expand...

Just trying to overwhelm with impressive looking links (can't remember off-hand the name of this fallacy; maybe "appeal to the full honey bucket"?).

PREMO Member
I like this parody version of the letter: 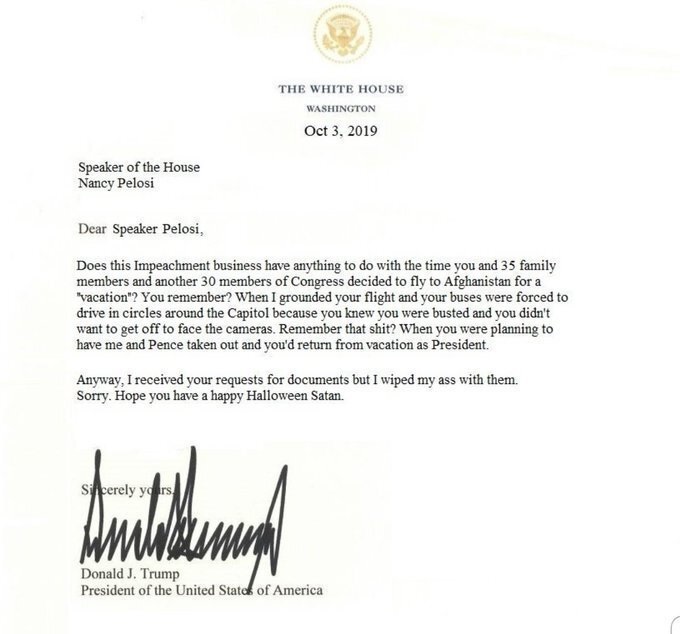 Yooper said:
Is this the process being followed? Unless I'm mistaken, no.
Click to expand...

A good read from https://litigation.findlaw.com/legal-system/presidential-impeachment-the-legal-standard-and-procedure.html the current rules are - "the actual impeachment inquiry begins in the Judiciary Committee of the House of Representatives. That Committee holds hearings, takes evidence, and hears testimony of witnesses concerning matters relevant to the inquiry. Typically, as occurred in the case of President Nixon, there will also be a Minority Counsel who serves the interest of the party not controlling Congress."

And that is why there has been no official inquiry started by the Judiciary Committee, they don't want the whole story out, only their version and the WH is smart not to fall into that trap.

Ken King said:
Most definitely no!
Click to expand...

Everything about this sucks.

Some "whistleblower" - who over hears someone else say something - and no one knows his identity.
Where on earth do you get threatened with removal from office from an anonymous person whose identity is concealed and whose testimony is not first hand - where the accused has no access whatsoever to any legal proceedings - where the questioning of everyone involved is behind closed doors and is conducted entirely by the opposing party?

You want to hear about Russian collusion? This is SOVIET UNION behavior. We have members of Congress talking about arrests of people, based on nothing, without due process , throwing them in jail and it's all secret?

Ad Free Experience
Patron
It may be time to round up the principle players and of this insurrection and hold them accountable. They're definitely not acting in the best interests of the republic or their constituents. They aren't following the letter of the law and our great Constitution, and they still seem to forget that THEY work for US, not vice versa. This temper tantrum has gone WAY beyond simple opposition to Trump and his supporters, to borderline treason. Their childishness and greed are why other forms of government fail and if we don't rein in our "leaders", I fear this experiment that our forefathers set in motion over 200 years ago, may not survive another election cycle.
H

My mind tells me that there must be some Democrats that are against all of this.
Can all of them be blind to what is going on in their party?
Are they frightened to speak their minds.?

They spoke of Russian collusion, but in my mind their collusion to bring down the President of the United States is a much more serious offense than any Russian did.
They made up the Russian charges and now they bring forth a CIA informant who listens in on the Presidents phone calls?? Allegedly?

What a ridiculous letter not based on any legal principal.

Chris0nllyn said:
What a ridiculous letter not based on any legal principal.
Click to expand...

Maybe true to some degree. But to make such a broad statement is grasp exceeding reach.

Yooper said:
Maybe true to some degree. But to make such a broad statement is grasp exceeding reach.

The White House Councel's letter cites Hastings v. United States to back their claim that "it has been recognized that the Due Process Clause applies in impeachment proceedings".

They are correct that the DC Circuit Court judge in Hastings ruled that Due Process applies to Senate impeachment trials, but that portion of the case was vacated because a similar case made it to SCOTUS (Nixon v. United States) and SCOTUS essentially ruled that the content of impeachment proceedings is solely up to the legislature.

They cited a portion of a case that doesn't apply.


The bottom line is, the rules for a process that would remove someone who holds office (impeachment) are NOT the same for the process in a criminal trial. People can not, and should not, conflate criminal trials and impeachments. They are not the same and the protections are not the same. The only remotely comparable thing is a grand jury proceeding. During those, the defendant doesn't even have the rights Cipollone lists and are saved for the actual trial should the grand jury choose to indict.


Contrary to the White House's claim, there are absolutely nothing that would require the House to have a formal vote to authorize the impeachment inquiry due to a rule change (House majority has unilateral subpoena powers) the Republicans put in place the last time they controlled the House.


Cipollone could reasonably argue that all this is some sort of political witch hunt, but that's because the impeachment process is a political one. A vote may be wanted for political reasons, but it's not required for legal ones.

Chris0nllyn said:
. A vote may be wanted for political reasons, but it's not required for legal ones.
Click to expand...

I hope they continue on without ever taking a vote on it.

Gilligan said:
I hope they continue on without ever taking a vote on it.
Click to expand...

Tell us again, what do you hope for?

Gilligan said:
I hope they continue on their current path without a house vote.
Click to expand...

Gilligan said:
I still hope they continue on their current path without a house vote.
Click to expand...

Gilligan said:
Maybe that's why I want them to continue onward without a vote. It does not matter. ;-) Nobody cares if the R's won't have the ability to participate in the process.
Click to expand...

Chris0nllyn said:
Tell us again, what do you hope for?

I hope they impeach Trump, without any of the implied and assumed due process of previous impeachment efforts.

PREMO Member
Is it just me..or has anyone else noticed how easy it is to troll that pothead Chris kid?

Gilligan said:
I hope they impeach Trump, without any of the implied and assumed due process of previous impeachment efforts.
Click to expand...