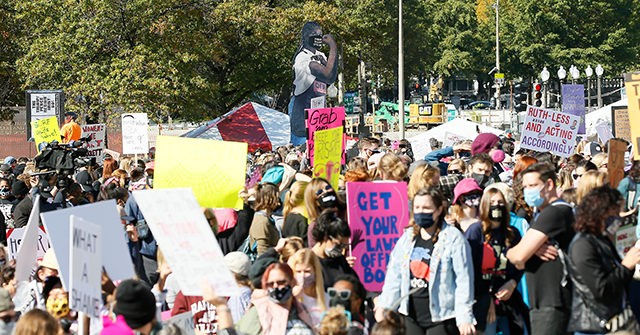 Women's March Underway in D.C.: ‘Trump Is an Unstable Penis’

The Women's March is underway in D.C. and in cities across the nation Saturday, as self-described feminists gather to protest Trump.

They certainly are fascinated with Trump & penises...
Quite disturbing, really...

PREMO Member
Patron
I love these "marches" because normal women at home get to see "feminists" screaming in people's faces and yelling obscenities, being insane and vulgar, and I have to believe it's a massive turn-off. Yes, ladies, this is the Democrat Party. Vote accordingly.

I'm waiting for this day

How many days until Election Day in US?

Count down every day to Election Day in US, with your own customizable countdown clock.

and the announcement that will have those loons pulling their hair out.

Time sure crawls on important matters such as this.....

PREMO Member
The Despair of Feminism


“The relationship between men and women,” writes Megan Fox in her recent book Believe Evidence: The Death of Due Process from Salome to #MeToo, “is a mysterious and beautiful thing. When each is acting within their boundaries, there is no end to the joy that comes from male and female love, familial or romantic.” The weakening of men and the empowerment of women, as “women claw their way to ever increasing power and fix men (especially young, white men), in their crosshairs,” destroy the sexual, romantic and institutional bond between the sexes. Similarly, the common preachment that men should jettison their manhood and become more like women is to distort the gender relationship and introduce a schism into the culture that can lead only to turmoil and unhappiness for both men and women. Male feminist Michael Kimmel ludicrously claims in Angry White Men that “abandoning that sense of masculine entitlement actually enables us to live happier lives.” On the contrary, the upshot is social misery.

“Radical androgyny,” writes Stephen Baskerville in The New Politics of Sex, is the consequence of the effort to control and punish men for their natural sexuality and to deny that “relationships between men and women should be regulated by social conventions that recognize the differences between men and women.” When nature is violated, domestic anarchy becomes the rule, not the exception, the feature, not the bug. This may partly explain why marriage is in decline and the MGTOW movement (Men Going Their Own Way) is gathering momentum.

Feminists have sold their birthright for a messy cottage, and will come increasingly to suffer for it in the coin of regret, loneliness and despair. In The Sickness unto Death, Danish philosopher and master ironist Soren Kierkegaard discussed the source of feminine despair, which he sensed gradually taking hold of the feminine psyche. Women, he felt, were being encouraged to file, so to speak, for self-divorce, to violate their own essential nature, which he understood as the capacity for devotion. “In devotion she loses herself, and only then is happy, only then is she herself…Take this devotion away, then her self is also gone.” “Devotedness” is her essential nature. Kierkegaard, a devout Christian, clearly had Matthew 16:26 in mind: For what is a man profited, if he shall gain the whole world, and lose his own soul? or what shall a man give in exchange for his soul? The word “man,” of course, is intended generically.


I didn't know she could read.
L

limblips said:
Penis envy from the fems?
Click to expand...

I would guess the crowd consisted of 75% gay lesbians to 25% bitter divorced wives.
L

Hijinx said:
I would guess the crowd consisted of 75% gay lesbians to 25% bitter divorced wives.
Click to expand...


I didn't know she could read.
Click to expand...