PREMO Member
By crossing the Parker Dam, we actually made it into California today. We just drove the car over. RVs aren't allowed over the narrow dam. We also went to the casino to see what all the shouting is about. They have a $14 AYCE prime rib on Friday, so we may head back later in the week.

So we began in Maryland. ANd we have been up to Maine and Montreal. Then south all the way to the Florida Keys. Then cut across the lower part of the US all the way to California. We have covered a lot of miles and states.

It's still somewhat warm here but bearable. Either we are adjusting or the 10 degrees cooler really makes a difference.

PREMO Member
Patron
Out with the old:

In with the new:

This puts us in cooler climes, much better RV parks (this place is a pit), and in close proximity to all the attractions we wanted to see that would have required a 1-2 hour drive from Williams. It was a juggle and required a good bit of research, but where there's a will there's a way.

It's kind of amazing to me that there aren't more terrific RV parks around Grand Canyon. With a couple of exceptions, they're all zero amenity rustic crap holes charging a fortune. No wifi, no cable, no pool, and in many cases - get this - no bath houses OR sewer hookup. They're basically a place to park your RV in the woods (for $50/night). And they get reviewed by (apparently) dirty hippies who don't require anything nice, because they get 4 and 5 star reviews on TA/Google/Good Sam and you have to look closer to find that they're dumps.

This is where KOA comes in! You know it's going to be at least decent because KOA will thump their campground owners who don't comply with basic levels of cleanliness and service.

Our Williams RV park is a true resort - and I say that cautiously because Havasu Springs where we are now was billed as a "true resort" and it sucks. The scenery and lake are gorgeous, but the RV facilities themselves are dirty and severely lacking, plus they lie about their amenities.

Anyway, you'd think with as big a tourist destination as Grand Canyon is, there would be a ton of great RV parks to choose from.

PREMO Member
I did finally go fishing before we left LH. The lake is a dammed up river. It's deep with sharp cliffs that run right into the water. 2 feet off the bank it's 15 feet of water. I tried to fish 2 other places in Arizona that were similar. Clear, deep lakes formed by damming up a river. I was 0 for 3 and not catching at least something is uncommon for me to experience. So I was determined to change my luck at LH. Then I saw the lake and it's water. Crystal clear with no signs of fish anywhere. Plus the boats and jet skis kicking up huge wakes. Not a fun time to fish. Plus the heat pushes the fish even deeper to the cooler water.

I finally gave in and tried my luck. My first Arizona fish was a small largemouth bass. But at least it was something. Then I catch a better bass. Just as I almost have it to the shore, it jumps and is able to shake the hook free. At least I got to see it. I moved to a different spot. I was limited in my bank fishing spots between the cacti, the rocks, shrubs and not being able to access the bank easily. I see what looks like a catfish swimming left and right. It's a decent size fish. I cast for a while and then something slams my lure.

If you know anything about fishing, on the reel there is a drag mechanism. You can adjust it to your liking. I have mine set about 50%. Not too loose & not to tight. The fish that I have hooked is now taking line off of my reel like it was shot out of a cannon. I think perhaps that I did hook the cat I saw earlier. It goes straight to the bottom which with this lake can be 20-30 feet down. Now I'm playing the I don't want to lose this fish game instead of trying to reel the fish in. I finally manage to winch the beast from the depths of the lake. Incredibly it's a panfish. It sees me and does another disappearing act. Now I just want to land the fish and take a picture. I'm starting to involuntarily shake. I get the fish on the shore and just gawk at it.

I have probably caught over 5,000 panfish in my 50 years of fishing. I like catching them and some days I target them. I have caught a few bluegill that were around 10 inches long. This fish, which is referred to as a shellcracker, is by far the largest I have ever caught. And when I say larger it's not even close. It's safe to say that this was twice as large as the largest I have ever caught. I don't have a ruler or scale with me so I can only guess it's size. 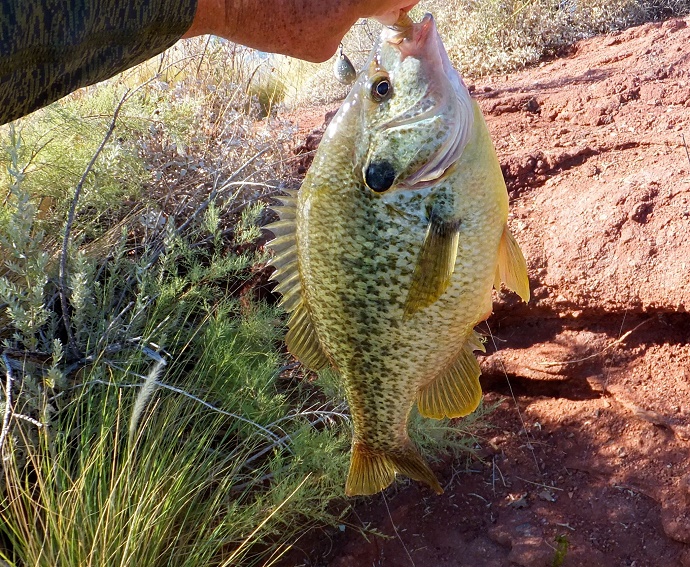 I take a couple of quick pictures then back in the water it goes. Off to fight another day. I fish some more then go back to my first spot. I catch another shellcracker that while it isn't as large as the first one I caught, it's easily the 2nd largest I have ever caught. So 4 fish the first time out. Now I'm regretting not fishing sooner. It's hot so I call it a day. 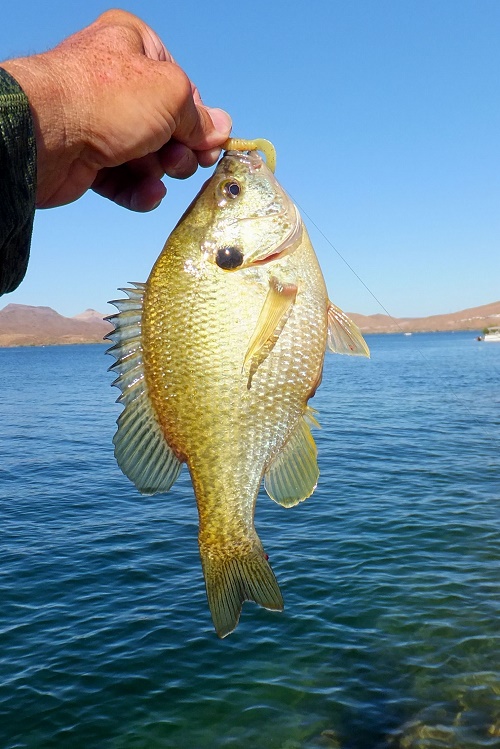 The next time out I catch a small shellcracker on my 2nd cast. Then I don't get anything the rest of the time out. I research online and find that there is a fishing pier close by. I drive over to see if anyone is fishing there. I need to cut down the learning curve on this lake. Nobody is fishing. I go in the welcome center and chat with the employee about the piers. He assures me that they catch fish off of then "all the time".

Chatting some more about fishing and traveling he asks me about my stops in Alaska. He asks me what cities I have visited. of them is Ketchikan. I mention I was with the state parks one summer. He asks me if I know Mary. She was the ranger for the parks when I was there. Turns out this kid's dad married Mary. So I know his dad and have been to a party at his dad's house. Small world.

Anyhow the lake is in a very scenic area. It's more of a boater's paradise than a fishing paradise. Perhaps if I came during a month that wasn't called June, July or August, the fishing might be better. Who knows if I will ever find out.
You must log in or register to reply here.
Share:
Facebook Twitter Reddit Pinterest Tumblr WhatsApp Email Link
Top