PREMO Member
Yesterday we hit the Pensacola Farmer's Market. The weather has been rainy the whole time we are here. Yesterday morning there was a brief lull in the showers. A few of the vendor slots were empty at the market. They hold it in a park right in the middle of downtown. We found parking right across the street then headed over. I took a raincoat for insurance that it wouldn't rain.

Some FMs trip Vrai fills an entire bag with goodies. Lafayette's market was 1 of those stops. We ended up with a bunch of things to snack on. Yesterday we just got some exotic cranberry bread from 1 of the bakers. The rum cake lady priced her goods at $13 for a small cake. I didn't want it bad enough to cough over $13. I guess if I was really crazy about it then maybe.

After we walked around their downtown area. It's very southern looking and has hints of New Orleans's architecture. It's filled with a few high end stores. Sadly a lot of the historic downtowns were we visit are reduced to antique stores, tattoo parlors, nail salons and dollar stores. P'cola's DT shows a vibrant, local economy. Later we stopped for a drink at O'Riley's Irish pub. It's a bit subterranean. You go down a few steps into the basement. It has a rich, dark wood style bar. The servers wear kilts. I thought those were Scottish attire. Anyway, we then looked over the menu, we got a couple of snacks. When we left it had begun to rain again. If it rains any more, I may start to grow moss. The only good thing is all the rain has kept the temperature low in the lower 60s.

Back at the car I wanted to see if a place I had visited was still opened. When I was sent to Pensacola for training I didn't have much free time to visit the area. We hit this 1 place because it was St. Patrick's weekend and they had a lot of events going on. They actually nailed boards across the front doors and everything was held outside. The GPS said it was only a few miles from where we were currently. So off we went.

The area didn't look familiar to me. But a lot changes in 33 years. The place now has a huge parking lot. It's so big they have enter and exit only signs all over. As luck would have it, we snagged an up close parking spot. It's still raining and there are lake sized puddles all over the place. Opening the front door to McGuire's, we are greeted by about 20 people, all waiting for a table. It's late afternoon on a rainy Saturday. I guess everyone got the idea to go to the local water hole for some food and drink.

Vrai gets us 1 of the tables off from the bar. So we avoided the long wait for a table. Glancing around you notice all the one dollar bills hanging from the ceiling or tacked to the walls. Evidently there are over $1 million worth hanging on that place. Imagine how much that must weigh. There is a lot of memorabilia hanging on the walls. There is a stuffed hippopotamus head adorning 1 of the walls. There are probably around 200 steins hanging around also. It appears that individual customers can leave a personal mug there for their next visit. Given all the trinkets and dollar bills the place isn't a dusty mess. A lot of our stops that have doodads hanging on the walls also have cobwebs and inches of dust on those things. Not this place.

Digging on their website shows that they have 615 seats in that place. It's a big place but I never imagined it was that big. They have an enormous staff. I saw visible management roaming around communicating with headsets. None of the employees had time to stand around due to the crowd. Some nights they have live entertainment.

Eating and drinking isn't the only thing we do. But when it's raining out, there really isn't much else to do. Between rainstorms on Friday I went fishing down at the campground pier. Hurricane Sally came through this area last September. The campground has since rebuilt their pier. But along the shores you can see the remains of a lot of piers that got tore up. I managed to catch 15 fish. Nothing big. I had a lot of bites. I suspect that there are a ton of little bait stealers in that area. I hooked a pinfish. 1 of the other anglers asked if he could have it. He tossed it out on 1 of his lines but didn't catch anything with it. Even the kid with the zebco pole that didn't cast very far caught a fish. My hope is to find some bigger fish while I'm here.

Right now it's somewhat sunny outside. Perhaps we'll take a drive in the opposite direction today. We still need to see Gulf Shore, Perdido Key and Orange Beach while we are here.

PREMO Member
Did y'all kiss the moose at McGuire's?! Somewhere on my computer I have a picture of me and my niece doing so I'll have to drag that out and post it!

PREMO Member
Patron
I have to believe that any Navy person who gets orders to Pcola would be happy about that. We had been to the downtown before on our way to Texas or somewhere but I didn't really remember it until I saw it again. It has these great city parks with events and fun things. Yesterday was a local teen dance troop entertaining a decent size crowd, with various snack trucks and groups selling t-shirts and giving out brochures.

Last night we went to the pizza joint outside our campground for carryout. We had a 50 minute wait for our pizzas because they were backed up, so I asked if we could bring in some beers (since they don't sell alcohol) and drink them while we wait. "Sure can!" So while we were sitting there enjoying our wait, the owner comes out and he's this older guy that looks like he's lived in Lillian AL his whole life (which we found out later was the case). Monello asks him, "What kind of flour do you use?" The guy was like.... .... ?

So Monello says, "Do you use 00 flour?" and the guy says, "I've been making pizza for over (however many) years and have never heard of that."

Anyway, the pizza sucked so we won't be getting it again while we're here. Not because of the lack of 00 flour

but because the crust was dry and dense and tasteless.

I got spaghetti and meatballs that was pretty good, though.

Today I thought we'd head for Flora-Bama bar but I drank so many beers yesterday that I'm about dead, and I definitely want to have a beer at Flora-Bama. So that will have to be for another day....

I remember going down to the docks to buy fish and shrimp from the fishermen. And my first Godzilla movie in a big old theater up the street. I think I was maybe 6 years old.

PREMO Member
Patron
It finally stopped raining so today we took a drive to Perdido Key and the Flora-Bama bar.

Flora-Bama is not "a" bar, it's an enormous megaplex of food, alcohol, and entertainment right on the beach. It's touristy in a good way that locals will like, too, but someone looking for fakey Disney style souvenir shops will be disappointed. There are several indoor bars and food counters, open air to enjoy the views and lovely weather, several outdoor bars, and a little bar right on the beach with tables/chairs. 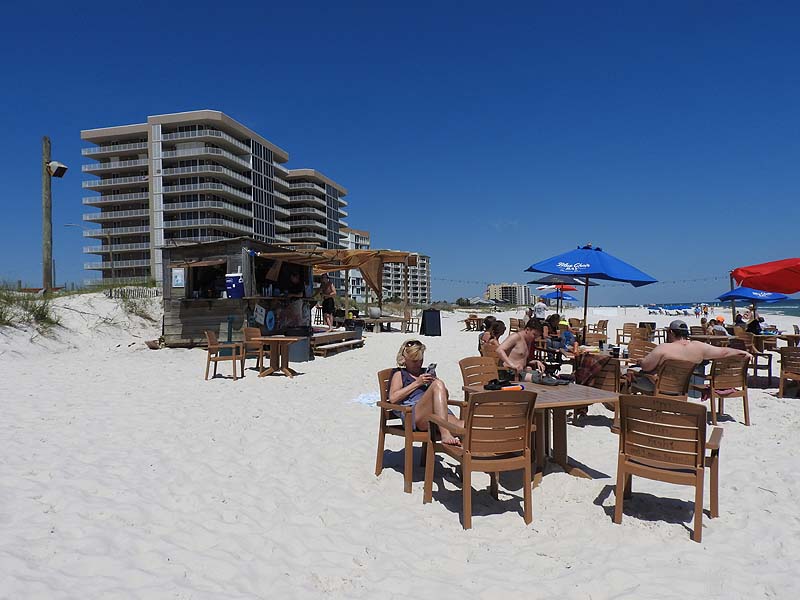 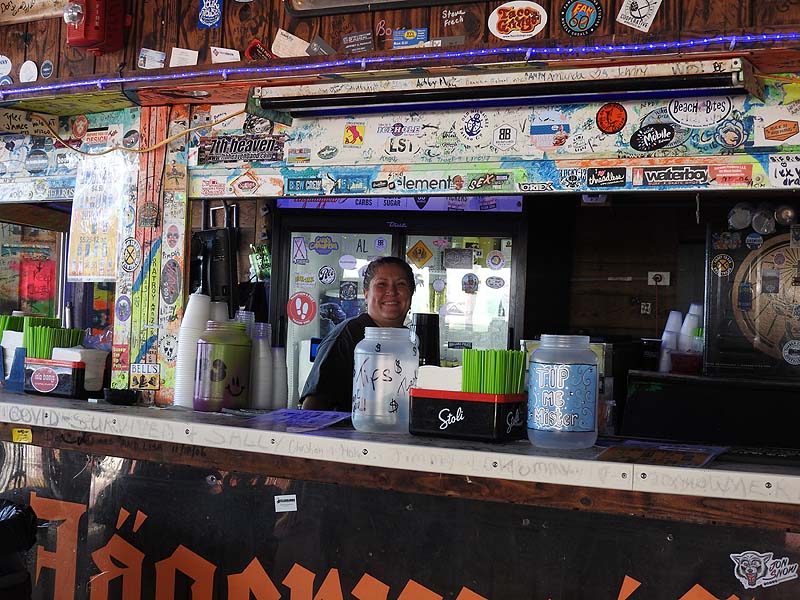 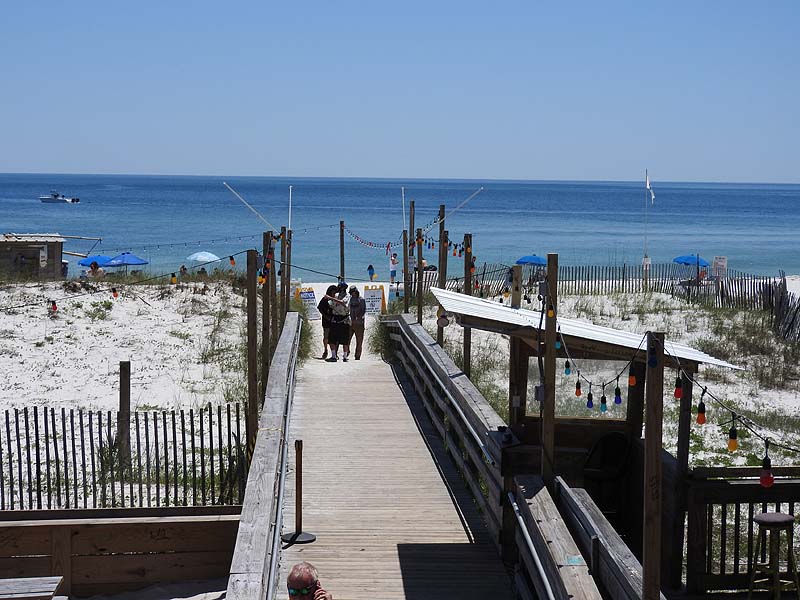 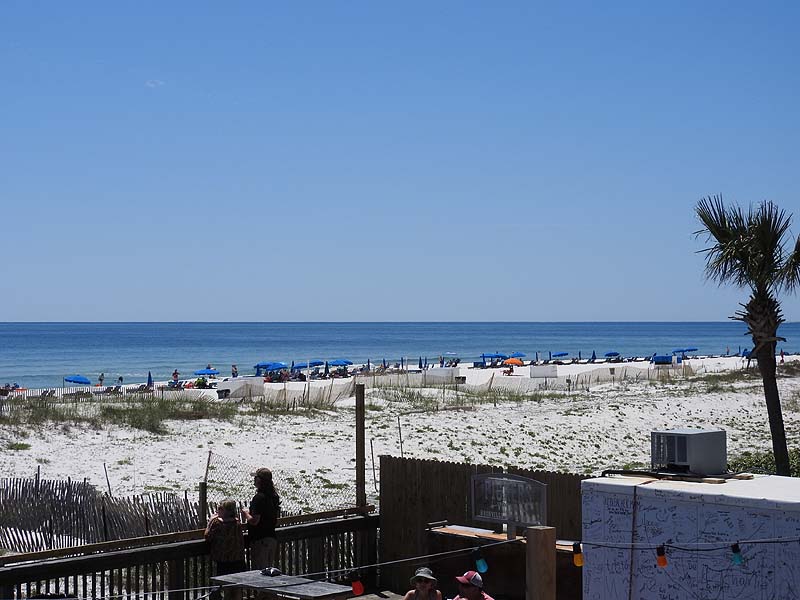 I honestly don't understand why people go all the way to Aruba or Cozumel or Jamaica when we have gorgeous beaches right here in the US with toilets that flush and no ganja men or cartel people bothering you. You can drink the water, you won't get kidnapped, and you know how the currency works. I seriously have no desire to ever leave the US for anything.

Please tell me those green straws on the bar were plastic and NOT paper....

TPD said:
Please tell me those green straws on the bar were plastic and NOT paper....
Click to expand...

They were indeed plastic.

Also note that the bartender isn't wearing a mask.
1

I try to be environmentally friendly and recycle and keep plastic out of the ocean and all that crap, but dammit, paper straws are one of the worst inventions ever. Ugh...

PREMO Member
The wax coated ones last a bit longer.

sastanley said:
I try to be environmentally friendly and recycle and keep plastic out of the ocean and all that crap, but dammit, paper straws are one of the worst inventions ever. Ugh...
Click to expand...

There's a place in SPI called Mahi Nic's that has amazing paper straws. They last through a whole large frozen margarita, that's how tough they are. So the useful paper straw has been invented and I don't understand why all the damn hippie bar/restaurant owners don't use them.

vraiblonde said:
Wait'll they see us roll up with our duct taped RV and Monello's missing toof.....

Make sure you have a brick too. That's an integral part of the "Redneck Repair Kit".

If you have extra duct tape make some home made wallets and refer to Monello as 'Tallahasee'. They should sell like hot cakes!
And paint a large #3 on the side of the RV for good measure.

You can get stainless steel straws in a lot of places, think I saw them at Bed Bath Beyond. Won't ever get mushy. Just stick a couple in your back pocket and take them everywhere! Save the Environment!!

Side effects may include: ripped jeans, holes poked in your butt, damaged car seats, and bent/flattened straws.

PREMO Member
Our new neighbors have a fresh pineapple on their table outside. The pineapple is the only thing on the table so far. I might have some interesting reports tomorrow.

I did catch 3 fish today. It's super windy. I was the only person down at the pier. I hooked something that took off and finally snapped my line. It might have been a ray. I did catch 1 of those today but it wasn't very big.

Monello said:
Our new neighbors have a fresh pineapple on their table outside. The pineapple is the only thing on the table so far. I might have some interesting reports tomorrow.
Click to expand...

You used to put your pineapple on our outside table all the time. No wonder that weird guy kept trying to talk to me.

That was before I knew what it meant.

What does it mean?

RoseRed said:
What does it mean?
Click to expand...

Interesting... A pineapple has been used forever to symbolize hospitality, welcome, friendship. A pineapple on the table center was the utmost sign of welcome for a visitor.