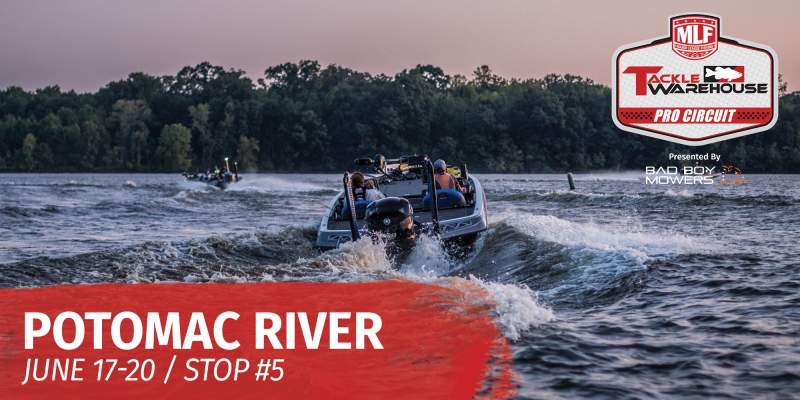 MARBURY, Md. (June 9, 2021) – Major League Fishing (MLF), the world’s largest tournament-fishing organization, is set to visit Marbury, Maryland, next week, June 17-20, for the MLF Tackle Warehouse Pro Circuit Presented by Bad Boy Mowers, Federal Ammunition Stop 5 Presented by Lucas Oil at the Potomac River. In its 26th season, the circuit (formerly known as the FLW Tour) features a roster of the world’s best bass-fishing professionals competing across six regular-season events, each with a top award of up to $135,000. The field also competes for valuable points to qualify for the 2021 Tackle Warehouse TITLE Presented by Mercury – the Pro Circuit Championship.

This is the fifth event of the 2021 season, hosted by the Charles County Board of Commissioners, offering competitors a total purse of more than $900,000 and marking the seventh time the Tackle Warehouse Pro Circuit has visited the tidal river.

“Charles County is home to more than 300 miles of shoreline for outdoor recreation and enjoyment,” said Commissioner Thomasina O. Coates, M.S. (District 2). “I am happy to welcome the Major League Fishing tournament back to our area and pleased to continue this partnership. It is events such as these that promote tourism and support the economic base in our community.”

The Pro Circuit last stopped at the Potomac in 2017, where Wisconsin veteran pro Tom Monsoor hoisted the trophy in his first major Tour win, bringing a four-day total of 66 pounds, 11 ounces to the stage. Prior to that, in 2015, Texas pro Clark Wendlandt – a three-time Angler of the Year (AOY) – won his fourth career Pro Circuit event on the fishery bringing in 60 pounds even. Washington pro Luke Clausen , a former FLW Cup and Bassmaster Classic champion, holds the record for the heaviest four-day winning weight on the Potomac River with a total of 69 pounds, 14 ounces back in 2011.

“The fishery is very healthy with a tremendous population of largemouth bass that are pretty eager to bite, so it should be a fun tournament,” said Pro Circuit angler Todd Walters of Kernersville, North Carolina , who finished in second-place in the MLF Toyota Series event held on the Potomac River in 2020. “Everyone is really looking forward to this event.”

The Potomac River is a tidal fishery, running roughly north to south into the Chesapeake Bay, with water that fluctuates a couple feet per day. Due to the constant ebb and flow, fishing is almost always shallow, either in the grass and pads or around hard cover such as rock and wood.

“The water is in really good condition,” said Walters. “The grass is just starting to grow about 2 to 4 feet off the bottom so that’s where you’ll find most of the bass. There were still some fish guarding fry and a few on beds a few weeks ago, but I’m sure that will change by the time the tournament begins.”

While there are a few sections of the main river that come into play, the bulk of the damage tends to be done in the mouths of the creeks, with some hot creek arms attracting a ton of fishing pressure.

“This is an area that I’m familiar with and that I’ve fished before – it has a tremendous population of largemouth bass and they are going to bite at some point in the day. It just depends on the tide during the tournament,” said Walters. “On the Potomac River, 90% of the fish are in 10% of the water, so it will fish small. But, there are plenty of fish in those areas to be able to handle the 163 boats in the field and everyone should catch some fish.

“I expect to see guys dropshotting (Yamamoto) Senkos in a slack tide, then when the water’s moving, they’ll be throwing swimjigs, ChatterBaits and shallow-running crankbaits,” continued Walters. “You’re always going to have some dock fish, and you can catch them flipping jigs and creature baits. I didn’t see any areas with matted grass where you’d need to punch it, but I expect to see guys flipping their jigs and creature baits in those thicker grass beds when the tide’s slack.”

Walters said he believes it will take 13 to 14 pounds per day to make it into the final round on Championship Sunday and anticipates a four-day total of 70 to 75 pounds will win the event.

Anglers will take off at 6:30 a.m. ET, Thursday through Sunday, from Smallwood State Park, located at 2750 Sweden Point Road in Marbury. Weigh-ins will also be held at the park daily at 3 p.m. Fans are welcome to attend the event or follow the action online through the MLF NOW! live stream and coverage at MajorLeagueFishing.com .

In Tackle Warehouse Pro Circuit competition, the full field of 163 anglers compete in the two-day opening round on Thursday and Friday. The top 50 pros based on their two-day cumulative weight advance to Saturday. Only the top 10 pros continue competition on Sunday, with the winner determined by the heaviest accumulated weight from the four days of competition.

The Tackle Warehouse Pro Circuit Presented by Bad Boy Mowers, Federal Ammunition Stop 5 Presented by Lucas Oil at the Potomac River will feature live on-the-water coverage and a two-hour action-packed television show that will premiere on the Outdoor Channel on Sunday, August 29 from 7 to 9 a.m. ET and re-air on the Sportsman Channel this fall. Weigh-ins will be streamed daily and fans can catch live on-the-water action all day Saturday and Sunday, June 19-20 on MLF NOW! beginning at 7 a.m. ET at MajorLeagueFishing.com.

The 2021 season culminates with the Tackle Warehouse TITLE Presented by Mercury, the Pro Circuit Championship, where the top 48 pros in the points standings plus 2020 TITLE Champion Rusty Salewske of Alpine, California, and 2020 AOY Ron Nelson of Berrien Springs, Michigan, will compete for at top prize of $235,000. The 2021 TITLE will be on the Mississippi River in La Crosse, Wisconsin on Aug. 17-22, and is hosted by Explore La Crosse.

About MLF BIG5
MLF BIG5 is part of MLF, the world’s largest tournament-fishing organization. It provides anglers of all skill levels the opportunity to compete for millions in prize money across five tournament circuits featuring a five-biggest-fish format. Headquartered in Tulsa, Oklahoma, with offices in Benton, Kentucky, MLF and its partners conduct more than 290 bass-fishing tournaments annually around the world, including the United States, Canada, China, Italy, South Korea, Mexico, Namibia, Portugal, South Africa, Spain and Zimbabwe.