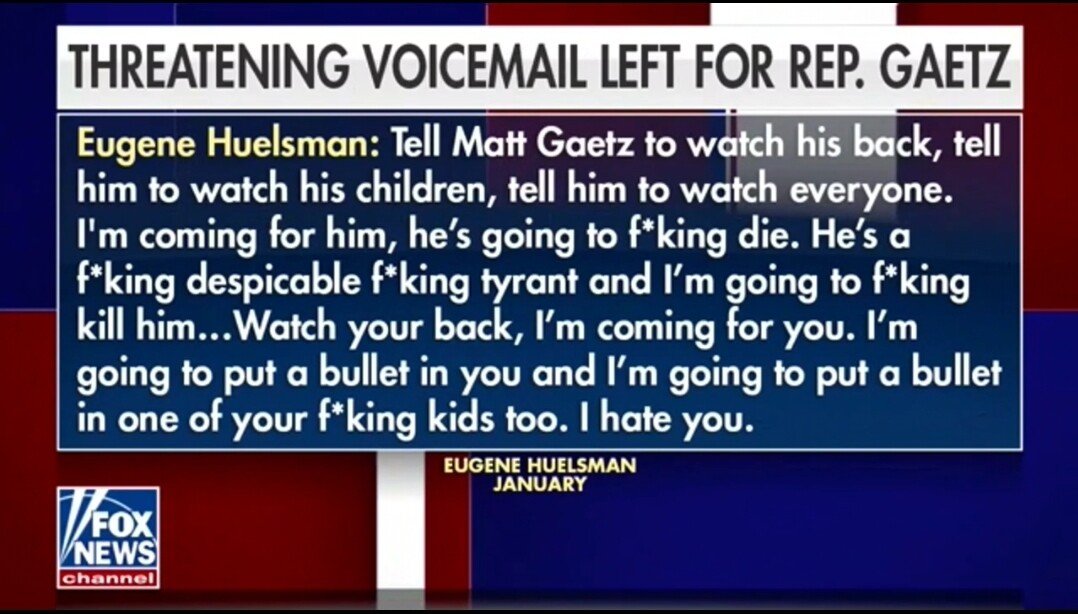 A California man was busted for threatening to kill Rep. Matt Gaetz and shoot his children in a profanity-laced phone message to the Florida congressman’s office, reports said. 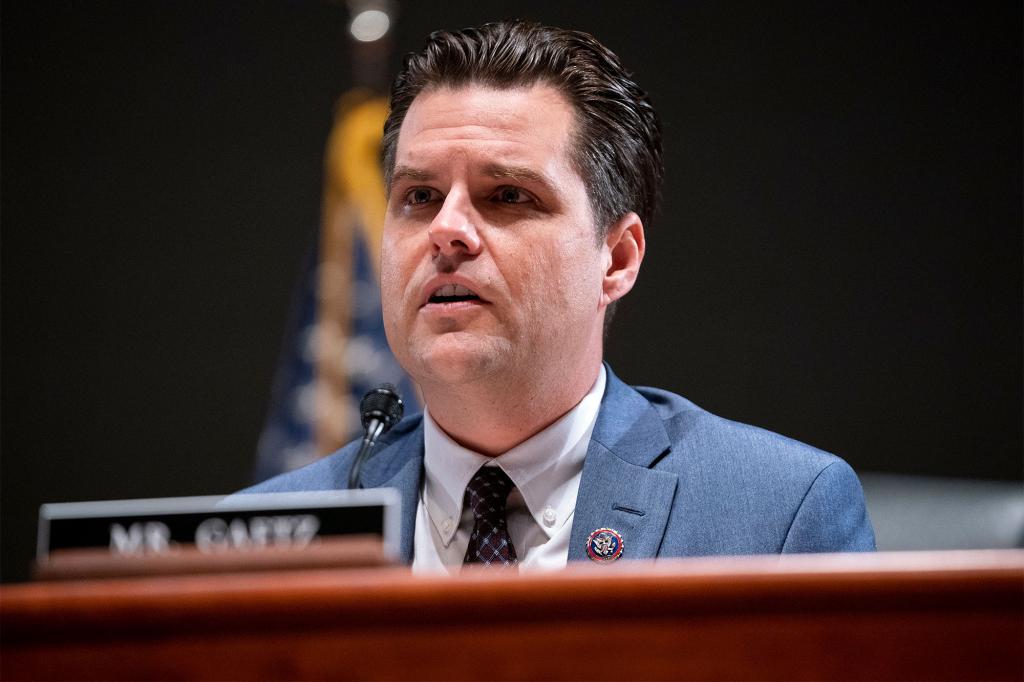 A California man was busted for threatening to kill Rep. Matt Gaetz and shoot his children in a profanity-laced phone message to the Florida congressman’s office, reports said.

PREMO Member
Must be 1 of those white supremists joe keeps telling us about.

Can one be arrested for being stupid?
P

Most crimes happen because someone got stupid. Hell, JPC was the poster boy for that.

It's a good thing Brandon and the demonrats (sounds like the name of a band, doesn't it?) are working to eliminate cash bail.

PREMO Member
Patron
If it were up to me I'd strap that man to the chair. He's obviously insane and a danger to the public. Or should we wait until he actually kills someone's child?

What's amusing is that progs will say, yes, we have to wait until he kills a child; they also say "one life is one too many" about a host of perceived injustices.

And the real BS in all of this was that it was very clear the man threatened to kill Matt and what, 9-10 months went by and nada, nothing?

vraiblonde said:
Or should we wait until he actually kills someone's child?
Click to expand...

EVERYONE Just Knew they were bat crap crazy, but until the bullets start flying you cannot execute someone form being eccentric

EVERYONE Just Knew they were bat crap crazy, but until the bullets start flying you cannot execute someone form being eccentric
Click to expand...

NYT Painted Matt Gaetz as a Child Sex Trafficker. One Year Later, He Has Not Been Charged.​

On March 30 of last year, The New York Times published an article that was treated as a bombshell by the political class. Citing exclusively anonymous sources — “three people briefed on the matter” — the Paper of Record announced that Rep. Matt Gaetz (R-FL) “is being investigated by the Justice Department over whether he had a sexual relationship with a 17-year-old and paid for her to travel with him.”

From the start, the GOP Congressman vehemently denied these accusations. And he went further than mere denials: he claimed that these allegations arose as part of a blackmail and extortion scheme to extract $25 million from his family in exchange for not publicizing these accusations, which his father promptly reported to the FBI. While many scoffed at Gaetz's story as fantastical and bizarre, that part of his story was vindicated last August when a Florida developer and convicted felon “was arrested on a charge that he tried to extort $25 million from the father of Rep. Matt Gaetz in exchange for a presidential pardon that would shut down a high-profile, criminal sex-trafficking investigation into the Republican congressman.” In November, that developer, Stephen Alford, pled guilty to trying to extort $25 million from Rep. Gaetz and his family.

In other words, the only component of this story that has thus far been confirmed — a full year after the NYT first trumpeted it — is the part of Gaetz's denial where he insisted that all this arose from an extortion attempt. Yet none of that mattered, and it still does not matter. As I wrote in the aftermath of the Times story, designed to warn of the perils of assuming someone's guilt without any due process: “That Rep. Matt Gaetz (R-FL) is a pedophile, a sex trafficker, and an abuser of women who forces them to prostitute themselves and use drugs with him is a widespread assumption in many media and political circles.” CNN celebrated the fact that one of Gaetz's arch political enemies — the liberal icon Rep. Liz Cheney (R-WY) — said that “as the mother of daughters, the charges certainly are sickening.”

In sum, Matt Gaetz has now spent a full year with millions of people believing he is guilty of pedophilia and sex trafficking even though he has never had the opportunity to confront witnesses, evaluate evidence or contest his guilt in a court of law because he has never been charged. Instead, he has been found guilty by media-led mob justice, all from unethical and possibly illegal leaks by “people briefed on the matter.” As a result, not only did Gaetz become radioactive due to crimes that have never been proven, but so too did anyone who argued that he is entitled to due process before being assumed guilty. For writing that April article and producing an accompanying video advocating the need for due process before assuming someone's guilt, I spent two days trending on Twitter due to widespread accusations that, like Gaetz, I too must be a pedophile who was only defending him because I am guilty of the same crimes. That is the core evil of mob justice: it triggers the worst instincts in mob participants, who become drunk with righteous rage and bereft of reason.

PREMO Member
He needs to sue the NYTimes.

The more successful lawsuits brought against them, the WaPo, CNN, MSNBC etc. the better the chances of putting them out of the slander and propaganda business permanently.

Folks, becoming obvious if they're hurling accusations its to cover their own indiscretions, pigs!

Good on Matt and family, was waiting for the truth on this one. Mr. Gaetz was one of the first to call out the creeps and the whole Russian Cullsion Gang Bang!

Kyle said:
He needs to sue the NYTimes.
Click to expand...

If it was not in the editorial section of the paper, it is not Opinion.

In any event, if there can be no justice in the court... perhaps just put a contract out on the editor and staff instead.

Kyle said:
If it was not in the editorial section of the paper, it is not Opinion.
Click to expand...

While I agree .... the NYT has used this in court to get lawsuits struck down

1. You can't libel someone and get away with it just because they're a public figure. A number of celebrities have pursued charges against various publications and won.

2. It's not opinion when they allege a specific act. Example: It is my opinion that so-and-so is a skeevy nutbag. It's accusation if I say he is running a child sex ring.

NYT didn't even say they thought Gaetz was a sexual predator; they flat out said here are these things he "allegedly" did. Sure, they tried to hide behind the old "anonymous sources" charade (along with that all purpose word "allegedly"), but printing rumors and presenting them as credible makes them a tabloid, and tabloids get sued all the time.

The reason public figures don't pursue these things more often is because it's costly and time consuming. And tabloids (such as WashPo and NYT) know this, so they feel free to spread rumors about people they don't like. Also it's the "Barbara Streisand effect" where the story will die if left alone, but becomes a tsunami news story if the victim fights back.
You must log in or register to reply here.
Share:
Facebook Twitter Reddit Pinterest Tumblr WhatsApp Email Share Link
Top