PREMO Member
New York City defied a deportation request from ICE last year and released an illegal immigrant into the community — and now he stands accused of killing a 92-year-old woman beloved by her community.

Reeaz Khan, 21, has been charged with murder and sexual abuse against someone incapable of consent. Police say they caught him initiating the attack on surveillance video.

U.S. Immigration and Customs Enforcement says he never should have been out on the streets anyway, after he was arrested on weapons and assault charged last year, and ICE asked New York to turn him over.

New York City defied a deportation request from ICE last year and released an illegal immigrant into the community — and now he stands accused of killing a 92-year-old woman beloved by her community.

You get what you vote for!

vraiblonde said:
This crap is infuriating.
Click to expand...

It's infuriating that people in these sanctuary states and communities want this.
Do-gooders-------------- people well-meaning but unrealistic or interfering philanthropist or reformers.
People who think they are being kind but are getting people killed or robbed or hit by drunken driving aliens with no insurance..
If you need sanctuary and immunity from ICE it is obvious you are arrested for some crime.

Why do people want these people in their communtiy.

Hijinx said:
Why do people want these people in their communtiy.
Click to expand...

Because they're aholes and crooks and this makes them feel virtuous.

I don't feel sorry for these people. As you said, they voted for this. And those who didn't vote for it can vote with their feet. There are any number of magnificent cities in these United States. If anyone needs recommendations I'm happy to help.
L

Freefaller said:
You get what you vote for!
Click to expand...

Although Cuomo got the majority he got it from the shithole counties in NY. Too bad NY doesn't have an electoral college system. 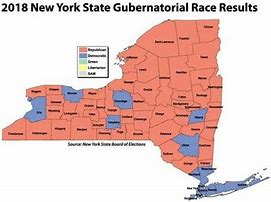 Damn shame Reeaz Khan didn't murder the gov or mayors son, THEN they would take notice.

That's likely the only way it will ever get corrected.

Democrats start to suffer the consequences of their bullshit.

limblips said:
Although Cuomo got the majority he got it from the shithole counties in NY. Too bad NY doesn't have an electoral college system. View attachment 144298
Click to expand...

If states had electoral college there would never be another Democrat governor again.
B

Freefaller said:
You get what you vote for!
Click to expand...

This is why we have the Electoral College, or we would have tyranny by the majority.
One party rule cities and states, where the wishes of a considerable number of residents are ignored.

At some point, between "Sanctuary" laws and now laws ripping the second amendment to shreds, there has to be a constitutional showdown between states and the federal government. What takes precedence.
It seems cities and states are taking control of what is supposed to be federal laws that are administered by the executive branch.

I like the cry when Trump said he would refuse sanctuary cities and states federal funds - right away they sued demanding their money.
The courts are basically allowing them to not only ignore federal law, but take an active role in blocking enforcement, then denying the federal government any leverage to enforce the law.

PREMO Member
Ad Free Experience
Patron
It's past time for ICE to start issuing rewards for citizens that track the movements of these alien criminals when they're released from state custody, and lead ICE to them for arrest, prosecution, and deportation. The magic mulatto wanted a civilian police force. I can see no better addition to his legacy than an armed immigration force to ferret these animals out of our society and send their asses packing.

Anyone at the state or local level that agrees with this nonsense of not cooperating with federal authorities is anti-American and should be charged with aiding and abetting. Charge a few mayors and governors with federal crimes and see how fast this liberal BS ends.
You must log in or register to reply here.
Share:
Facebook Twitter Reddit Pinterest Tumblr WhatsApp Email Link
Top