Merlin99 said:
Flopper, originated by Sockgirl. I can provide the visual aid if it's required.
Click to expand...

vraiblonde said:
Alllll... = "Awww, that's so cute it makes me want to throw up"
asshat: A person whose behavior displays such ignorance/obnoxiousness that you would like to make them wear their own ass as a hat. short for mainman
bangbang : very casual sexual intercourse. origin: FD Dog
bankhead: attributed to dems consistently misspelling a particular smilie...
chock: to choke on something. origin: K_Jo
clam down: K_Jo’s way of trying to keep everyone at peace. K_Jo said, “Clam the #### down bcp, we’ll find your missing finger.”
coward: If I knew who you were, I'd give red karma back to you. Origin: elaine
dummah: short for dumb ass. origin: RoseRed
Hens - be wary of the feathered kind; they secretly control all things forum. What is known about them is the topic of much rumor and speculation which must mean its really bad!
Gaynet: the other forum.
heh: a singular amused sound, sometimes with a hint of surprise. Pete likes this one.
Kerosilene - the stuff that you pour into emergency home heaters. origin: itsbob - misspelled because BadGirl wasn’t there to help him that day.
krama (or kramer): karma, usually red or green in color.
meam: mean. origin is Tigger, now know as TWL's Wife
meamie: one who art thou mean.
mpd: a$$holes with multiple user I.D.'s. origin: unknown, but Catt thinks she invented it.
newbie: another new ####### to the forum.
ouchkas: just tried twisting the top off of a samuel adams, why does my hand hurt ? origin: FireBrand
Petezza - a winter holiday falling Dec 5th to 13th characterized by assigned days of specific action such as "random acts of meaness" and "be snotty"; days are determined by the creator of Petezza, Pete.
prolly: probably.
remot: BS gal’s word for the TV remote control. during football season origin: BS gal; assisted by Otter.
Red Headed Sluts: AKA - RHS - term coined by Otter that describes 3 close knit forumite friends after they had gone drinking at the Tiki 2 years ago ( or more )
siggy: signature line.
sniggle: part snort, part giggle
smow: southern maryland snow. origin: RoseRed
snort: is the sound some who giggle laugh and snort through their nose make
STUF - What dyslexics say when they don't want to listen anymore. Meaning clarified by Vrai.
Stud - bcp uses this to describe himself. The women don’t use this description for bcp.
Super Bowel – Dems was trying to describe the championship football game of the season.
tread: thread. origin is Tigger now know as TWL's Wife
waaaaa laaaaa= voila. Morg did this, we don’t know why.
Waaaahmbulance: Sharon did this.
Weirest: a word used for the strange and unusual. origin: Geek.
woot woot: ...?
####, ###, ########### - the three big words; Dick is okay in the Proper Noun, but the male barnyard bird isn't allowed in any version due to the censors.
OP - Original Poster.
Click to expand...

Disheveled person that drives a Saab..

Gestapopo = Armed authorities that arrive at your domicile that may or may not know your rights.

Excellent bump in every respect. Thank you! 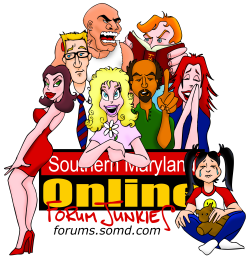 I don't think those are forum words. I've heard them sued before many, many years ago and way before I was on here. :yeahthat:

Where's the beef was Clara Peller for Wendy's.

Yooper said:
Excellent bump in every respect. Thank you!

Thank you sir. I feel I would be remiss if I did not give credit where credit is due.

BOP said:
They'd get a visit from the Gestapo...er, po-po if they did.
Click to expand...