PREMO Member
Patron
I'm not taking 35 tomorrow - I'm going the rural route. #1, there could be danger; and #2, even if the knuckleheads are just marching down the interstate it will still be faster to take the alternate route. Sitting in traffic for hours waiting for those people to get the **** out of the way isn't my idea of a good time.

PREMO Member
We are back in New Braunfels for a month. It's our 2nd repeat spot on our way back to SPI. It's an easy day when you are familiar with the route to take. We have already hit the pool & hot tub. It seems that things are a bit more relaxed here, virus wise, when compared to how it was when we left back in June.

I hope we can get a float or 2 in while we are here. Other than that, not sure what else we will do here. I'm sure a few stops in Gruene, river road & Canyon Lake will be fit in our wide open schedule.

PREMO Member
1 thing that stands out since our last time here is the traffic. I guess a lot of people stayed home when the lockdowns started. Now things are open but you have to be masked up. It's a noticeable difference. Perhaps this place is busier than what I initially thought.

The mornings here are very refreshing. Low 60s initially then it warms up. Weatherman is calling for temps in the 90s next week. Time to get 1 more float in.

PREMO Member
We drove down River Road today. Doing a mini river road honkey tonk crawl. At Budda's Big Deck we spoke with the owners wife. She said Bubba is 1 of 13 kids. Half are in law enforcement and the other half are criminals. I was like

PREMO Member
We are in the market for a new RV. The old homestead is 15 years old. It's starting to show. We thought we found a replacement diesel pusher but it has leveling issues. The company that made the levelers has been bought out by another RV company. They no longer use that model leveler. So no replacement parts can be easily found.

So the search continues. Today we looked at 5th wheels. They are less expensive than class A RVs but then I'd have to get a truck to pull it along. I'd trade in my Jeep for the truck but would probably end up having to pay or get a loan. I'm sure we will research the crap out of our options before we pull the trigger. That probably won't happen until we are ready to leave SPI in March of next year.

After touring 2 dozen 5th wheels, we went downtown for a cold drink. We stopped at the Phoenix Saloon. It's the first Texas bar that served drinks to women. It's a historic building with lots of character and history. They have 30 offerings on tap. They are known for their fiery chili. It's not made with ground beef. Instead they use stew meat. I have to say I like it this way a lot more. I also enjoy getting a drink at a historic watering hole. We have been lucky to have found a few over the years. We had a drink at the first bar in Florida. A lot of the bars in Tombstone were over 100 years old. The saloon is well preserved. Here's some photos I poached from their website: 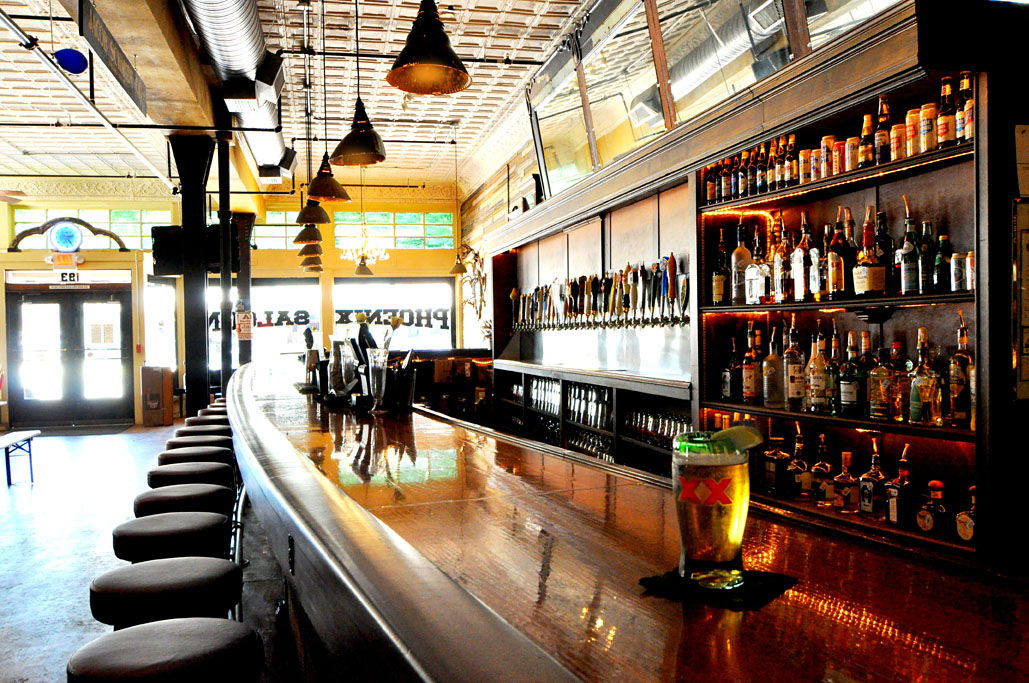 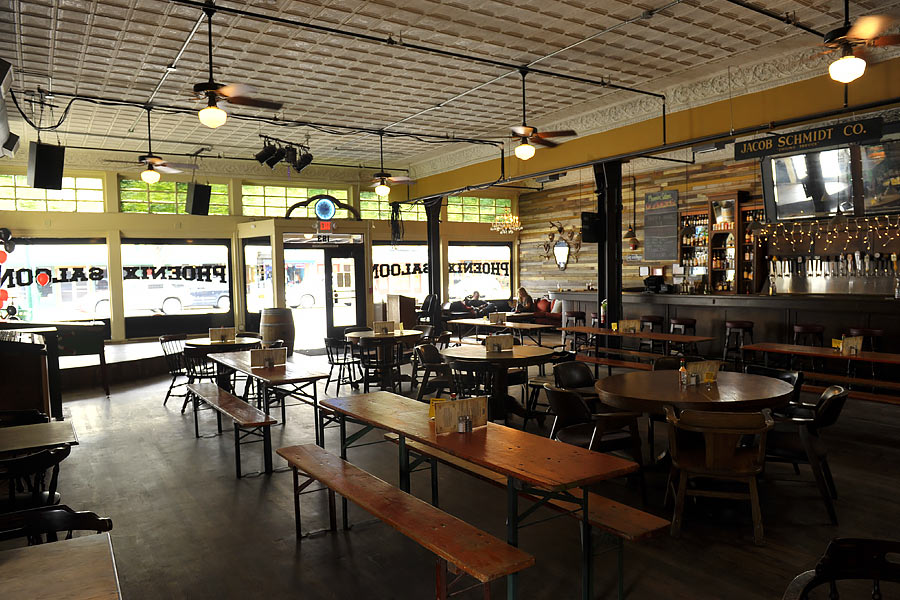 The only place I like more than a historic bar would be a bar with a waterview.

Our next stop was down the street a bit to the Muck & Fuss. We parked next door in the lot. When walking over it appeared the M & F was a restaurant. But next to that was a sign for the Sidecar. So we went into the Sidecar to look around. It was in the basement. Once we went in, I knew that we were way underdressed for this place. We told the hostess we wanted to look around. It wasn't busy so she gave us a tour.

It was 1 of those places that is hard to describe. You have to go there and experience it for yourself. I felt like I was transported to 1920. In addition to the bar, they have smug rooms that you can rent out for intimate, private parties. Here are pictures of a few of the rooms. 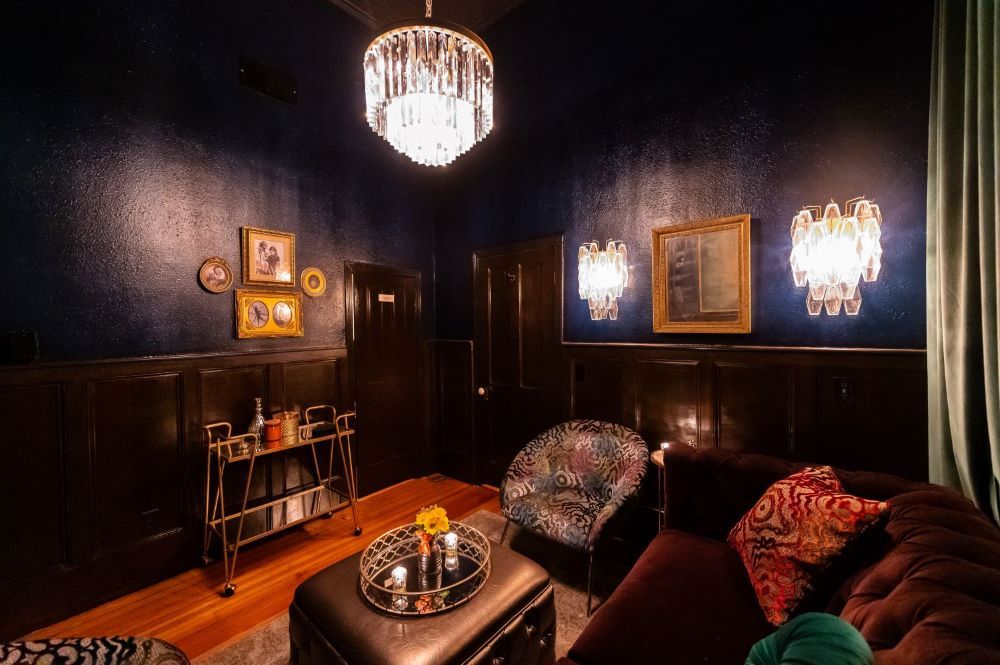 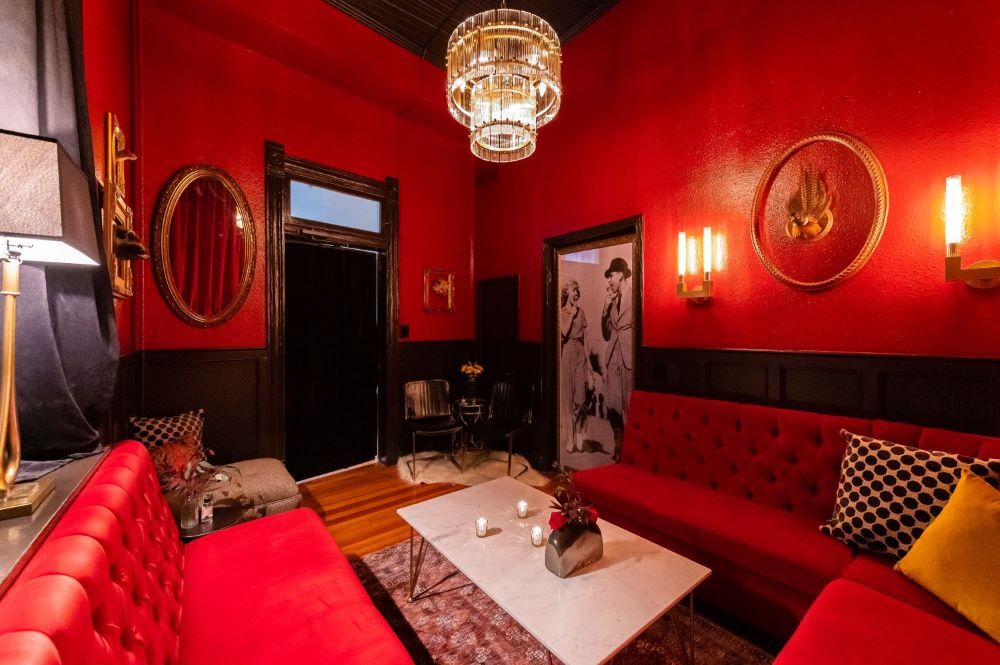 Here are a few pics of the bar area. 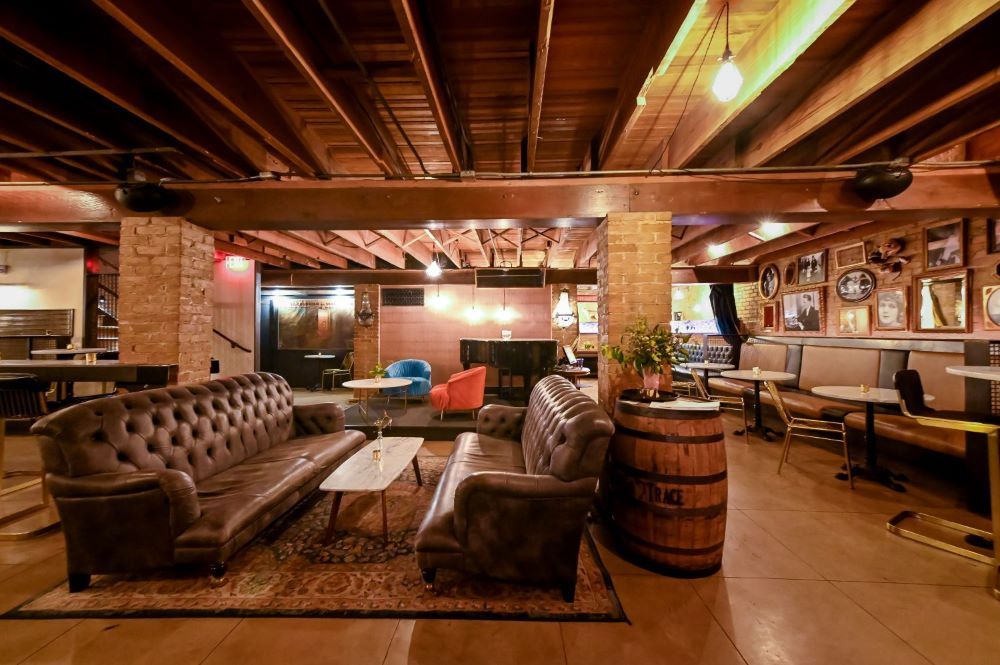 We thanked the hostess for the tour. We then proceeded back over to the M & F next door. They had a bunch of beers on tap. Our barmaid was from St Augustine, FL. We spent the rest of our time going over our living situation and possible future upgrades. We are content with what we have but the wear and tear is becoming a lot more visible. So who knows what we end up doing.

PREMO Member
Patron
What's with the bedrooms in 5th wheels? The living area is spacious and gorgeous, the kitchen same, the bathrooms are cute and there are a ton of homey touches.....then the bedroom is like a mattress on the floor. No nightstand type of thing, no outlets by the bed to plug in a CPAP or Kindle. It's like they got tired of designing once they got to the bedroom and just quit.

And that damn motorhome would be perfect for us if it weren't for the stupid levelers.

Fortunately we're not in a do or die position. We can look around and take some time. Deciding between a 5th wheel and truck vs a class A motorhome has been an odyssey, and we're still not solid on which way to go.

The 12-alarm chili I had for lunch and the 4 beers I drank throughout the day are at war in my stomach, so that's annoying. I used to be able to kill a 6 without batting an eyelash, and now 4 beers over the course of several hours gives me indigestion so bad it's almost not worth it.

PREMO Member
Patron
Why is the RV park so busy this weekend? People escaping Hurricane Delta. The cabins and tiny houses are full and there are a ton of RVs. Which is weird because there are about 8 million places you could go to closer to home and still be safe. But New Braunfels is pretty cool, and Houston isn't, so maybe it makes sense after all.

Also this morning when I went out I-35 was backed up and nobody was moving, and the frontage road was clogged up with all the people trying to avoid the interstate. Turns out a semi filled with Mason jars (!) overturned, split in half, and all those jars smashed on the road.

So you folks who were looking to get your fall canning done - yeah, your supplies won't be making it.

Monday is a holiday. Lots of my RVing family and friends love RVing this weekend as the final long weekend before winter kicks in.

kwillia said:
Monday is a holiday. Lots of my RVing family and friends love RVing this weekend as the final long weekend before winter kicks in.
Click to expand...

Our winter RVing is just gearing up. Just 2 more drive days this year for me. Then set up for the next 4 months.

PREMO Member
Apollo has not been feeling well the last few days. Vrai has restricted his diet slightly. It could be the campground water. We had no water for about 12 hours the other day. They were working on the pipes for the better part of the day.

Speaking of campground utilities, they are a frequent issue. Not like monthly but more often then I would have imagined. In Mathis our sewer was draining slowly. I let the park people know I had a problem. They ended up fishing out a huge clog that was mostly flushable wipes. It was down about 4 spots from us, but it plugged up everyone uphill. Sometimes during storms we lose power for a while. I don't recall having as many interruptions when I lived in a stick & brick home. I have to think a utility issue has to be a huge nightmare for a campground.

I found a new place to fish locally. I only caught 1 fish today but it's a nice quiet spot on the river. Prior to that I was going to a pond in an apartment complex. The 3 small ponds had some hungry fish in there. But they put up new no fishing signs. Prior to that I'd see 3-4 people fishing. Last run by wasn't anyone there. The fish weren't big but each time out I'd get half a dozen or so fish. The good thing about the new spot is that it's not too far and we can launch our boats right near the parking lot. So that's probably what we will end up doing this weekend.

yeah but, I was like tying my chuck taylor's the other day and realized that I aint hip no more...they are a metaphor of my life!!! Old, weathered, no celebrity endorsements, I cant jump higher, one string is broken and tied back together, the treads are running thin, they stink and the tongue is soiled...

GregV814 said:
yeah but, I was like tying my chuck taylor's the other day and realized that I aint hip no more...they are a metaphor of my life!!! Old, weathered, no celebrity endorsements, I cant jump higher, one string is broken and tied back together, the treads are running thin, they stink and the tongue is soiled...
Click to expand...

Chucks are back in style. I don't think they ever really go out of style.

PREMO Member
Patron
There are several German restaurants in town and I do love German food so very very much. So I asked in the NB Facebook group (more on this in a minute) which one we should choose. Because of the questions and answers I've contributed in the past they kind of know me, so they said Krause's.

It's downtown, rustic, with 80 beers on tap and two outdoor seating areas. The food was outstanding. I felt kind of bad because I hadn't had breakfast, so the Oktoberfest was the first thing in my stomach this morning besides coffee. But it was after noon, so I kind of had beer for breakfast but not really.

When we go to interesting restaurants, Monello and I like to order a LOT of food. The buffet, is what I call it. Then we have a bite of everything and have meals for several days. On my platter is schnitzel, pork shank, 3 kinds of wurst, kraut, cabbage, mashed potatoes, and plum sauce. And the spaetzel was part of Monello's separate meal that he got for some reason. We also had deviled eggs with assorted relishes including these sweetie drop peppers that I get addicted to. 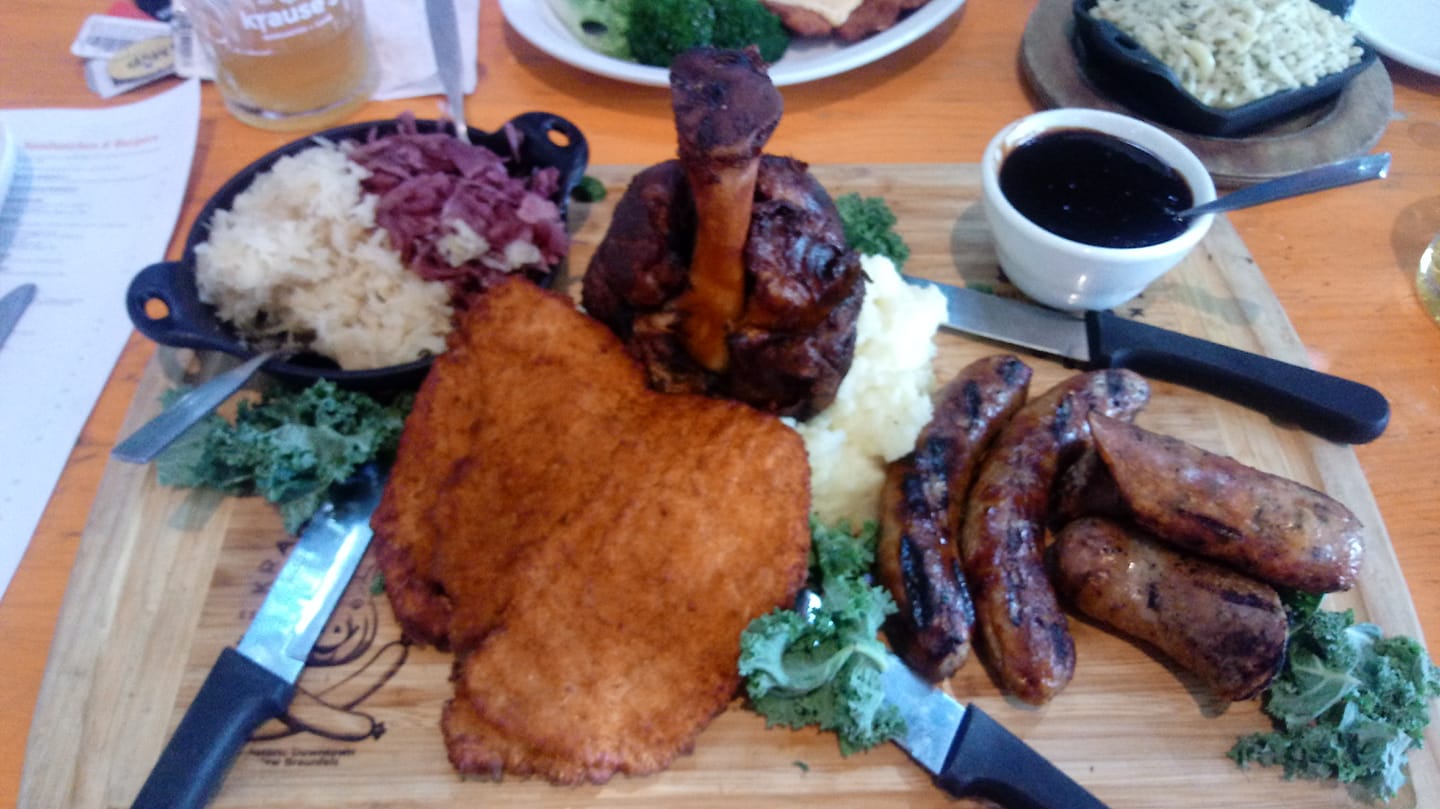 I've learned to join the local FB group when we roll into somewhere. That way I can ask questions and get the lay of the land from people who actually live there and know things. I'm not sure why it took me so long to think to do that. Kind of like it took me 4 years to figure out an easier, yet ridiculously simple, way to make the bed, and there's something else that I don't recall right now.