PREMO Member
‘He Nominated A Woman To Lead’ The SBA

GURPS said:
‘He Nominated A Woman To Lead’ The SBA

So I'm scrolling down to see what else is written and here is the ad right below your post. Made me laugh 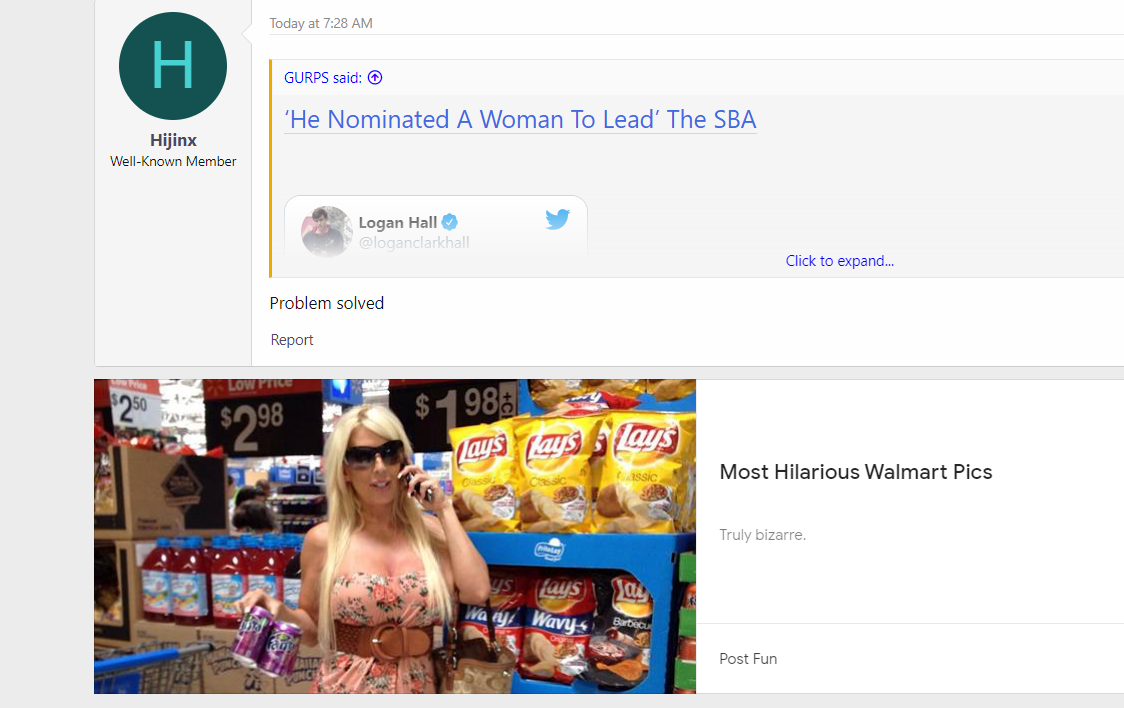 Scootboot said:
So I'm scrolling down to see what else is written and here is the ad right below your pose. Made me laugh

You think she was the one that was hired to run the Small Business Administration? Seems the only qualification is "being a woman". Maybe if they kept going with the tape Psaki would have said. "To start with he hired a woman that drinks purple drink and eats Wavy Lays. Not to mention she is well equipped to lead the SBA with great pointers and understanding how to maximize your assets."

PREMO Member
In the old days, they'd have called what Baghdad Jen is doing "shucking and jiving." Now it's probably ray-sis, but that's what they used to call it. Well, that, and deliberately obtuse.


“The last thing, the last thing we need is Neanderthal thinking that in mean time everything’s fine, take off your mask,” Biden continued. “Forget it. It’s still matters. … And it’s critical — critical, critical, critical — that they follow the science. Wash your hands, hot water, do it frequently. Wear a mask and stay socially distanced. And I know you all know that; I wish the heck some of our elected officials knew it.”

The reporter continued, “He says ‘Mississippians don’t need handlers. I just think we should trust Americans and not insult them.’ He’s making an argument that this is really about personal liberty here. Does the president have any second thoughts about the language that he used yesterday, and how does comparing someone to a Neanderthal help convince them to change course and get on board with your public health message?”

Psaki spun Biden’s remarks this way: “The behavior of a Neanderthal, just to be very clear, the behavior of. Look, I think the president — what everybody saw yesterday was a reflection of his frustration and exasperation, which I think many American people have, that for almost a year now, people across the country have sacrificed, and many times they haven’t had information they need from the federal government.”

Asserting that the people of Texas and Mississippi, among other states, had been ignorant of public health guidelines, she continued, “They haven’t had access to a greater understanding of what the public health guideline should look like, and those include many, many people in Mississippi, in Texas, in Ohio, Florida, in every state across the country. He believes that with more than half a million Americans’ lives lost, with families that continue to suffer, that it’s imperative that people listen across the country, whether they live in a red state or a blue state, to the guidance of public health experts.”

the fuking experts that flip flop weekly on what actions to take ...... 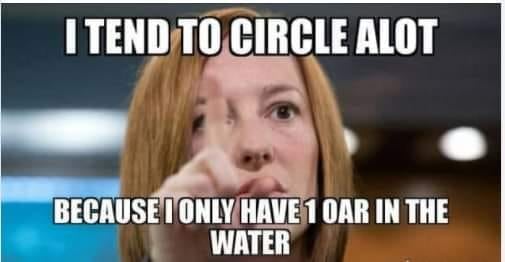 Scootboot said:
So I'm scrolling down to see what else is written and here is the ad right below your post. Made me laugh

I'd love to know when she's leaning over at the frozen food freezers. Headlights make my world go round.

“Well, first it’s Mexico will have to be, is an important partner in ensuring we’re addressing the flow of migrants from Central America through Mexico, and many to the border of the United States,” Psaki responded. “We have conveyed privately and publicly, as well, that the majority of people who come to our border will be turned away. We certainly also recognize that because the president and our administration has made a decision that the way to humanely approach immigration is to allow for unaccompanied minors to come and be treated with humanity and be in a safe place while we’re trying to get them into homes and sponsored homes that some more may have come to our border, and there have been, of course, a large flow of children across the border.”

“We recognize that, but we made a policy decision because we felt it was the humane approach,” she said. “But the facts are the vast, vast majority of people who come to our border are turned away, and the statistics bear that out.”


Even CNN pressed Psaki on Biden’s border crisis, specifically on why Biden won’t refer to it as a crisis.

The two had the following exchange:


CNN REPORTER: The administration has refused to call it a crisis, instead referring to it as a challenge and saying what you call it doesn’t make a difference of how you’re responding to it. But now today, there are over 3,700 children, unaccompanied migrant children, in border patrol custody. They’re spending on average over 100 hours, four days, in these facilities that are jail-like facilities not meant for children, so how can you say that’s not a crisis?
Click to expand...

PSAKI: Well, I think what Ambassador Jacobson and Secretary Mayorkas were conveying, and what I’ve conveyed, is it doesn’t matter what you call it. It is an enormous challenge.
Click to expand...

3700 children that likely do not speak a word of English, the USA will become their mother and father and be the custodial parents; responsible for everything. Food, housing, clothing, health care (how many of the young girls are pregnant or soon will be?) etc etc.
This whole deal is seriously messed up. We need to take care of Americans and fu@k the illegals. Take care of our veterans!
I have lived in both SW FL and southern CA for a total of about 22 years. A lot of people with strong opinions about open arms and borders have probably never lived in close proximity or competed for jobs with illegals. I doubt any of them have been behind a woman that refuses to speak or learn English with 5 kids and one in the oven paying for groceries with food stamps. Bet no one watched a family of four eating Wendy's food on the tail gate of a pick up truck and dump all their trash on the ground instead of taking it to the trash receptacle 5 feet away. (That happened when I first moved to CA in 2000 and I have never forgotten it)
We already have enough illegals in this country and anyone that thinks we are not in a crisis is in total denial or just plain ignorant. I beg some dems to take in a family or three!
I could be accused of being heartless and or racist but personally, I don't give a flying fig. I have worked hard all of my life (and yes, I was in competition for min wage landscape jobs in SW FL in the 80's) and I hate seeing this country I love being taken over by people from south of the border. We will never get rid of them and where some may be hard working; many are not and will further help bankrupt this country. And the dems are allowing and encouraging it.
Disgusting.
H

Where are the parents to these children?
Are they runaways from home? Or are they sent here by their parents?
Why are we accepting them and not sending them home?

When I was in CA, there was a newpaper article I wish I had saved about how the latinos/ hispanics were purposely procreating to churn out as many brown children as they could so that they will be the majority in this country.
Though I haven't seen any statistics lately, my guess is they are succeeding esp with the new wave of people being invited and welcomed into our country.

frequentflier said:
When I was in CA, there was a newpaper article I wish I had saved about how the latinos/ hispanics were purposely procreating to churn out as many brown children as they could so that they will be the majority in this country.
Click to expand...

Why Not, it is the Muslim Takeover method ... that and immigration 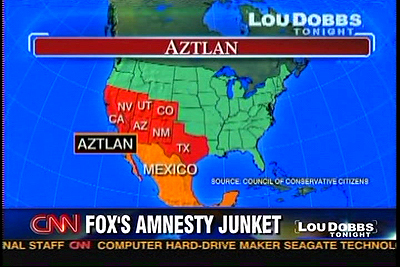 I know Atzlan is a thing, Mexicans want to ' reclaim ' the southwest through assimilation

Why Not, it is the Muslim Takeover method ... that and immigration

I know Atzlan is a thing, Mexicans want to ' reclaim ' the southwest through assimilation
Click to expand...

Evidently the Southwest wants them to. They voted for it.
All but Texas.
H

Hijinx said:
Where are the parents to these children?
Are they runaways from home? Or are they sent here by their parents?
Why are we accepting them and not sending them home?

Maybe what is happening is these kids show up and are allowed to stay. Then while questioned asked about their parents, where are they. They find they are right over the border waiting for this govt to reunite them. So they are reunited and all get to stay. Its just a new game to get in.

PREMO Member
Doocy asked Psaki what the Biden administration is doing to protect the citizens of border towns in Texas, where illegal immigrants are testing positive for COVID at a rate of nine percent, which, Doocey noted, is “more than double the national average.”

That’s when Psaki really started to stumble. “Well… I don’t know… I’m not questioning the data,” she began, before trying to sidestep the question by adding, “I certainly would refer to [U.S. Customs and Border Protection] and I’m happy to get more specific data…”

“That’s who gave us the numbers,” Doocy said.

At that point, Psaki, who said she wasn’t “questioning the data,” went on to literally question the data.

PREMO Member
Jen Psaki needs an intervention. Or, at least, a high colonic. Perhaps the entire administration can do with a good cleansing. Otherwise, how do you explain not only their continued refusal to credit Trump with anything having to do with the vaccine but also their taking credit for vaccine accomplishments that are clearly Trump’s?
Insider:

Psaki on Friday pushed back when a reporter asked whether Trump deserved any acknowledgement for his vaccine efforts.
She said the progress on vaccines was a “Herculean incredible effort by science and by medical experts.”
“And certainly, we’ve applauded that in the past, and we’re happy to applaud that again,” she added.
Click to expand...

That wasn’t the question, Jen.

On Friday, a reporter pressed Psaki on Biden’s speech, asking: “Why not just say, with credit to the previous administration and the former president for putting us in this position, we are glad that we have been able to move it forward?”
Psaki dismissed the question as an “excellent recommendation as a speechwriter” and said the purpose of Biden’s speech was to provide the American people with an “update on what his administration has been doing.”
“Americans are looking for facts. They’re looking for details. They’re looking for specifics,” Psaki said. “And I don’t think they’re worried too much about applause from six months ago when the president has already delivered that publicly.”
Click to expand...

Actually, no he hasn’t. Neither Joe Biden nor anyone in his administration has ever publicly credited the Trump administration with bringing a vaccine to combat a deadly disease to market in record time. In a statement earlier, Trump seemed a little miffed about that. 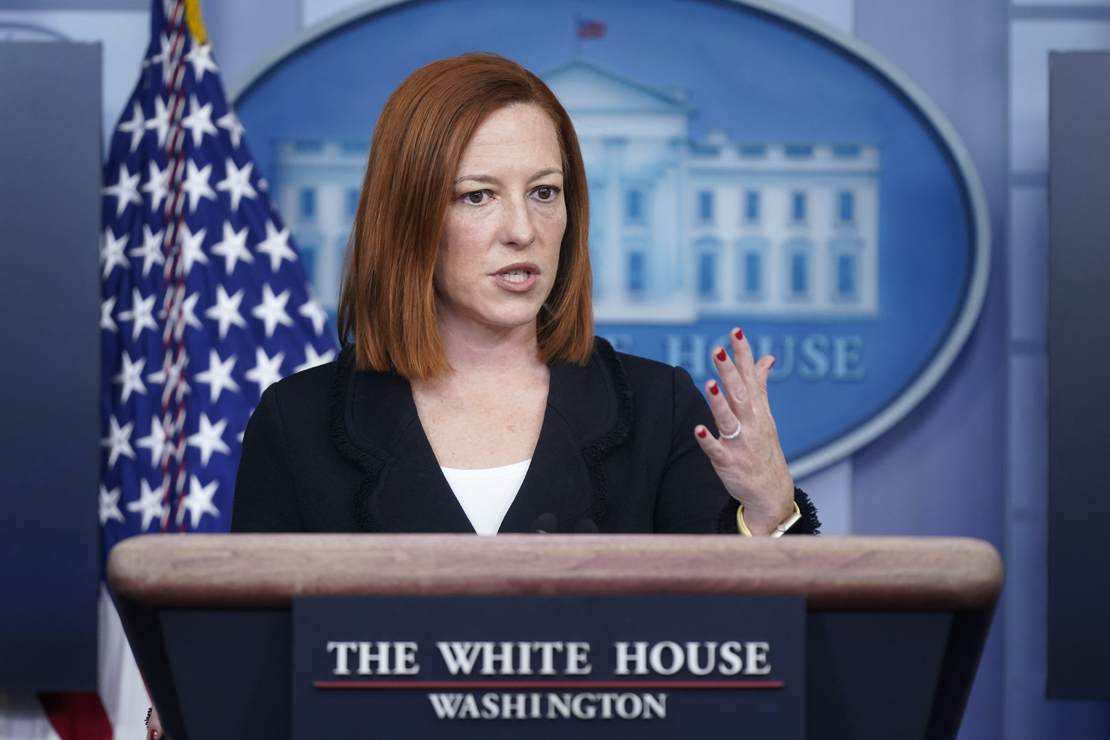 It's getting to be sort of comical. Jen Psak gets any mention of Joe Biden's predecessor stuck in her throat.