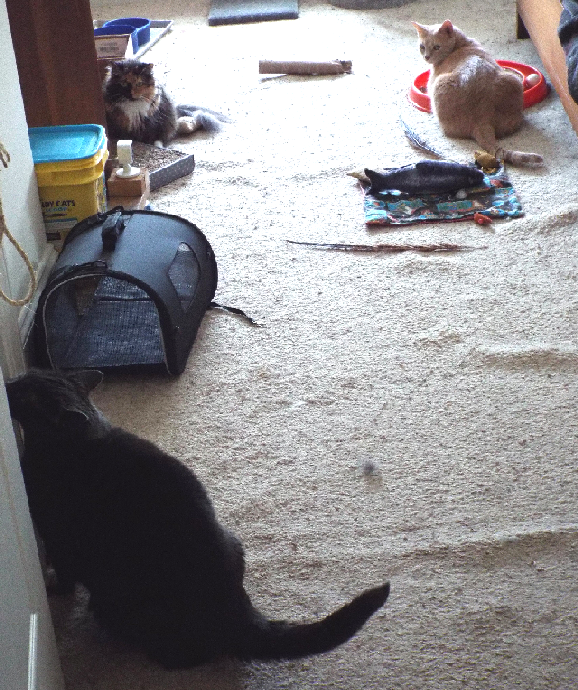 spr1975wshs said:
Miss Phoenix reared up, put her forepaws on the lower drawer handle and stretch her neck up.

The had two nose touches, then she got down and hissed.
When he jumped down to leave, she bopped him. She is always good at keeping her claws sheathed.
The she ran under the bed. He looked perplexed, then left.
Click to expand...

That there is your typical female behavior — initiate contact, kiss, then hiss and attack.
And the poor boy leaves looking perplexed, “what was that? I thought we are cool”.
Typical, I tells you, them wimmens

UglyBear said:
That there is your typical female behavior — initiate contact, kiss, then hiss and attack.
And the poor boy leaves looking perplexed, “what was that? I thought we are cool”.
Typical, I tells you, them wimmens

As I wrote elsewhere, I think they are now at the junior high school level for boyfriend/girlfriend relations.

Also, Miss Phoenix has chosen to self identity as a teacup Maine Coon.

spr1975wshs said:
As I wrote elsewhere, I think they are now at the junior high school level for boyfriend/girlfriend relations.

Also, Miss Phoenix has chosen to self identity as a teacup Maine Coon.

So love this thread about your kitty cat capers. Keep on pawin’ on. Our feral cat, Lucky, shows his appreciation every day, and he and our sweet Doodle dog are best friends.
Last edited: May 29, 2021

Louise said:
So love this thread about your kitty cat capers. Keep on pawin’ on. Our feral cat, Lucky, shows his appreciation every day, and he and our sweet Daisy Doodle are best friends.
Click to expand...

It is amazing and gratifying when a once feral animal gives that trust.
I had that feeling with Miss Teia (09/1997 - 11/2018) when she sat on my lap for the 1st time about 6 months after we adopted her at about age 12. She had been kept as a house feral for 10 years and was not socialized. Anita caught the moment as she had taken pictures of a Cooper Hawk in the backyard and was coming to show me the pictures on the digicam. 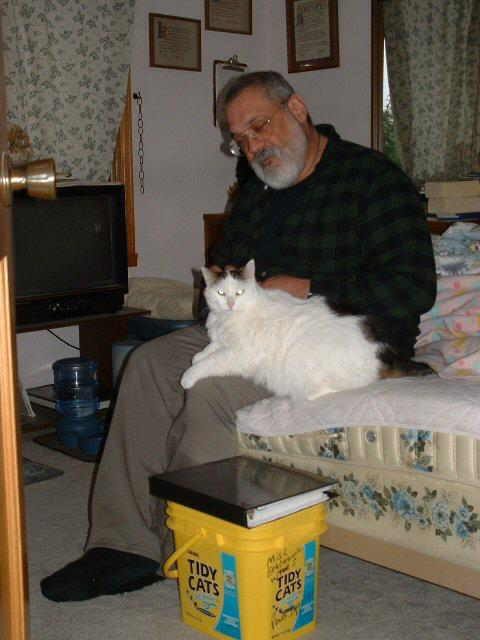 Teia was a little over 19 pounds when we adopted her.

PREMO Member
Ad Free Experience
Patron
Just came downstairs from Miss Phoenix having a chaperoned visit by Mr. Buff.
It went like usual, with the kind of comical, P rushes up to B, touches noses, then hisses.
A little later, she rushed him again, and batted at him, obviously trying to miss.

While he was snacking from her kibble bowl, Phoenix went across the hall to check out the people bedroom for a few minutes.

Cooper was distracted by having noms downstairs in the kitchen,

Before I cleaned up and changed, gave Missy a few minutes with the door cracked open enough for Buff to just stick his head through, which he did did not. She sat there quietly, just looking.

He got bored and went downstairs. I opened Fenix gate, thinking Cooper was likely under the bed.

Phoenix, not knowing where the boys were, went across the hall to the people bedroom, sniffigated around and then saw him under the bed. No hisses or grrs from her. She lay there watching a few minutes. I think he stirred, because she ran back to her salon. As I was closing the screen, Cooper came out from under the bed.

All in all, a good turn in her courage I think.

PREMO Member
Ad Free Experience
Patron
About 2 hours ago, gave Miss Phoenix a walkabout, without knowing where Buff and Cooper might be lurking. It went on for about 20 minutes.

Cooper was lurking at the edge or perception for most of it. He was watching, but keeping out of the way.

Mistress Phoenix braced him up before retreating under the front end of the bed. She popped out and batted at him a few times.
He got bored, I think, and was making his way out of the room.

Phoenix came out from under the bed like a Calico Lightning Bolt and chased Buff into the people bedroom.

Cooper was so startled his tail was poofed out fully like a bottle brush. He turned to protect his brother, but stopped when I spoke his name in a firm tone.

Phoenix then stopped chasing Buff and went back into her safe haven.

He was lounging on her captured ball toy. Phoenix rushes at him from where she was watching him by the other corner of the bed. She stopped with about 2 inches between their noses. Buff stayed, calmly laying there. She did reach out, bump noses and then scampered away.

PREMO Member
Ad Free Experience
Patron
Buff is such a very good boy. He is curious about Phoenix and tries to approach her. He does not strike back when she hisses or bats at him. He calmly backs away. He has a very good sense about other kitties.

PREMO Member
Ad Free Experience
Patron
From the overnight footage, looks like I nodded off after opening the door to Fort Fenix about 11 PM.
She and the boys had about 2 hours of unchaperoned possible encounter time.

Miss Phoenix explored the hall a bit, and came across to the people room.
She was in and out several times.

Buff was his usual nonchalant being, Missy hissed at him once or twice, but no chasing.
He was also in and out of the room several times. Finally showed himself the door and disappeared down the hall.

Cooper had a very peaceful visit in Fort Fenix for the better part of the 2 hours.
The couple of times Missy deigned to notice him, it was warning hisses.

One time he did give a little yowl back.

When Anita went to bed about 1 AM, she had to carry Cooper to the door.
Missy was forted up, in the closet (she knows how to pull the door open).

PREMO Member
Ad Free Experience
Patron
Missy had a couple walkabouts, plus chaperoned boy cat visits today.
Her complaints were almost constant, but at lower volume.
Both boys sensed when they had worn out their welcome and left Fort Fenix without me needing to help them.

PREMO Member
Ad Free Experience
Patron
Missy had an hour to herself this evening. Both boys were shut in the people bedroom.
They do have food, water and litter boxes available.

She spent about 20 minutes of it atop the 6 foot tall bookshelves in the tech library.
She had scaled a pile of banker's boxes and jumped the remaining three feet.

She rested for a while after exploring atop a box of toner cartridges, then jumped the near 7 feet down to the floor.
I was concerned, but she ran down the hall to Fort Fenix. Never thought a tiny thing like her would do that.
Last edited: Jun 17, 2021

PREMO Member
Ad Free Experience
Patron
I am pleased to report Missy P did NOT hurt herself from the leap down 7 of her body lengths.

PREMO Member
Ad Free Experience
Patron
Here's how I reported it on one of my FB profiles:


After last night's "Test Flight," am happy to report that Captain Phoenix of the Catamount Grange Air Force
is in good shape and fully ready for duty.

She was running around, both Fort Fenix and the people bedroom when I gave her a walkabout this morning.
Jumping up on the beds, a 4' tall shelf, the window sill, and stopping to tease the boys at Teia's Gate in good spirits.

Anita said she couldn't wake me. Went in to see if Missy was okay.
She was sleeping under the bed.
Mr. Cooper was sleeping atop the kitty bush in there.

Buff was on his box in the other room.

Cooper woke up and left on his own, as he has been doing.
I must have roused during the night, woke up in bed.

PREMO Member
Ad Free Experience
Patron
After work, went upstairs to change into lounge wear. Cooper and Buff were chowing down in the kitchen, so I opened Fort Fenix without closing Teia's Gate.

Miss Phoenix had a nice little wander around. After about 15 minutes, she was seated in the doorway to Fort Fenix and Buff made an appearance.

Phoenix hissed, but he remained his imperturbable self. Buff moved closer and she reached out to touch noses, twice, without hissing again.

They sat looking at each other a couple minutes and then Buff wandered into the people bedroom, and then the bathroom.

Phoenix stared for a minute or so, and then came across the hall to see if she could see where he went.

I think she remembered, "Oh No, A Boy Cat!" She skittered back across the hall. I then closed up shop.

PREMO Member
I think all will be ok. Our feral cat, Lucky, went to the vet today for the first time. Got a check up and rabies shot. I thought he would be traumatized. He was just fine when he got home. I understand the territorryness of it all, but I think your Kitty Kingdom will be peaceable in the end.
Last edited: Jun 24, 2021

Louise said:
I think all will be ok. Our feral cat, Lucky, went to the vet today for the first time. Got a check up and rabies shot. I thought he would be traumatized. He was just fine when he got home. I understand the territorryness of it all, but I think your Kitty Kingdom will be peaceable in the end.
Click to expand...

PREMO Member
Ad Free Experience
Patron
For a total of 2 hours yesterday, over 5 tries, Miss Phoenix and the boys had chaperoned visit time.

The last one was about 10:30 PM. I think she was tired of having company.