Former New York Giants safety Tyler Sash was arrested early Saturday morning in Iowa after leading police on a drunken scooter chase and being shot with a Taser.

He was suspended in 2012 for violating the NFL's policy on performance-enhancing substances and was cut by the Giants prior to last season.
Click to expand...

Carolina Panthers star Greg Hardy has been released from jail Wednesday after a judge set his bond at $15,000 for a domestic assault charge involving his girlfriend.
Click to expand...

Phoenix Suns guard Archie Goodwin was arrested on misdemeanor charges of disorderly conduct and resisting arrest in his hometown of Little Rock.
Click to expand...

In addition to the two counts of first-degree murder in Abreu and Furtado's deaths, Hernandez has also been charged with three counts of armed assault with intent to murder and one count of assault and battery by means of a dangerous weapon
Click to expand...

Perfect fit for the SEC.

Claiborne and Golden, who both were expected to play key roles as sophomores this fall on the A&M defense after starting as true freshmen in 2013, were arrested and charged with aggravated robbery Tuesday, according to the College Station Police Department.

According to police, the pair are accused of robbing three male victims at gunpoint on May 23 after the three men agreed to purchase marijuana from Claiborne and Golden.
Click to expand...

Seems the NBA has a high percentage of it's players that can't seem to obey the law. Probably happens when you coddle a kid from the time he's in middle school and tell him that he's special. Then when they transgress, all the responsible adults look the other way or make excuses for them.

Grizzlies forward James Johnson has been arrested for domestic assault and accused of hitting and choking his wife at their home.
Click to expand...

Like Dean Wormer said "Fat, drunk & stupid is no way to go through life, son". Well it seems Hope has 2 out of 3 covered. Imagine my surprise when I learned there is such a thing as women's pro soccer.

Soccer star Hope Solo was arrested on domestic violence charges early Saturday after allegedly assaulting both her sister and nephew at a home in Seattle, Washington, police said.

Police said Solo allegedly assaulted her sister and a 17-year-old nephew early Saturday. Officers responded to a 911 call for a disturbance in which a male reported that a woman would not stop "hitting people" or leave the house, the statement said.

At the home, officers heard a disturbance. Inside, Solo appeared "intoxicated and upset," police said.
Click to expand... 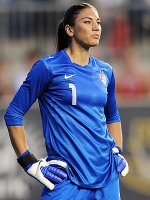 Hardy's attorney, Chris Fialko, said his client was not the aggressor. Fialko said Hardy called 911 at 4:14 a.m. after Holder refused to leave his apartment.

"We're trying to get her out of my house and she keeps running back in every time," Hardy told the 911 operator. "My neighbor is outside witnessed everything. ... My manager is trying to restrain her she's trying to break free tried to hit me with her heel ... I'm literally running around.

Two University of Miami football players arrested on sexual battery charges against a "physically helpless" 17-year-old girl were dismissed from the team and suspended Tuesday.

Court and jail records show JaWand Blue and Alexander Figueroa were booked on the charges Tuesday.

both players admitted to buying drinks for the accuser, bringing her back to Figueroa's dorm room in the early-morning hours of Saturday and repeatedly performing sexual acts, including intercourse, without her consent while she was "physically helpless to resist."
Click to expand...

Smith, 25, is the fifth Ravens player arrested this offseason.

Police said Smith was helping an intoxicated woman in the bathroom of a Towson, Maryland bar when she because nauseated. After medics arrived, officers repeatedly asked Smith to step aside and he allegedly refused to comply, saying several times that he was helping the woman.

I bet he ends up becoming a minister after he sees the errors of his ways.

A day before former Lions receiver Titus Young was to appear in court for a hearing regarding four felony counts, he got arrested for another felony.

Young was arrested on July 9 and charged with battery with serious bodily injury and was being held at the Twin Towers Correctional Facility in Los Angeles. He was also charged with four misdemeanor counts of battery of school, park or hospital property
Click to expand...

The guy is already suspended from the NFL.

Fred Davis might be currently suspended from the NFL, but apparently, that's not the worst of his problems these days. The former Redskins tight end also has a warrant out for his arrest in Washington DC.


[Davis] walked outside, grabbed a handful of dirt and flowers from the hanging plant box and threw them at [his ex-girlfriend's] torso area.

Basically, Davis allegedly threw dirt at her and made fun of her butt. Also, at some point during the melee, the ex-girlfriend tried to grab a plastic ketchup bottle so she could squirt Davis.
Click to expand...

PREMO Member
Looks like a position at CB just opened up.

starting cornerback Ed Wilkins has been "removed from the program" while the school looks into his Friday arrest on felony armed robbery charges.

Wilkins and a second man were arrested and booked into Forrest County Jail after allegedly entering a Hattiesburg residence and demanding money and drugs from three victims inside at gunpoint.
Click to expand...

The longhorns give new meaning to the term 'double team'. Pretty soon college football players are going to need warnings like the labels on cigarette packs.

Texas coach Charlie Strong announced the indefinite suspensions of wide receivers Kendall Sanders and Montrel Meander after both players were charged with sexual assualt on Thursday.

the alleged victim returned home with Meander and agreed to engage in consensual sex with him. It was then that Sanders knocked on the door and was allowed into the room by Meander. Meander then went into the bathroom as Sanders took off his clothes, and after the alleged victim said she did not want to have sex with him, Sanders got into the bed and forced himself upon her anyway.

Meander then returned to the room and court documents state both players "forcibly penetrated the victim."
Click to expand...

The university and coach so far have said nothing on this situation.

Rhaheed-Muhammad, who attends Fort Pierce Central High School, has reportedly been molesting his young cousin since she was 11-years-old.
Click to expand...

Convicted Pro Bowl defensive end Greg Hardy said he wants to remain with the Carolina Panthers beyond this season.

Hardy addressed the media before Sunday’s practice but refused to answer specific questions about his recent conviction on two domestic violence charges except to say, “I hate that I have distracted my team.”

Hardy did not show any remorse during a six-minute interview and didn’t offer an apology to the victim in the domestic dispute.

Hardy was convicted this month of assaulting a female and communicating threats and sentenced to a 60-day suspended jail sentence and 18 months’ probation following an incident in which he attacked his ex-girlfriend in his apartment.
Click to expand...

Because a guy might punch back and hurt him. 7 footer needs to fight someone his own size.

Former NBA No.1 draft pick Greg Oden is out of jail following his arrest on battery charges for allegedly punching his ex-girlfriend in the face.

Police arrested Oden on battery charges early Thursday, alleging that he punched his ex-girlfriend in the face during a fight at his mother's suburban Indianapolis home.
Click to expand...

His dad is an NFL hall of famer

The lawsuit, filed on behalf of Abigail Ross, a sophomore at Tulsa, states that basketball player Patrick Swilling Jr. raped her in January. It outlines three prior alleged incidents involving Swilling, from a woman who reported in 2012 that he raped her while the two were students at the College of Southern Idaho, a woman at Tulsa who reported a sexual assault to campus security, and a woman who said Swilling tried to sexually assault her before friends intervened.

"Despite its knowledge of at least one, and as many as three prior allegations of sexual assault and misconduct perpetrated by Swilling, TU undertook zero investigation of his conduct and permitted Swilling to continue to attend TU," the lawsuit states. "... TU was deliberately indifferent to the substantial risk that Swilling would sexually harass other female students at TU. As a result of TU's deliberate indifference, Plaintiff was subjected to extreme sexual harassment in the form of rape by Swilling."
Click to expand...

Give a thug a million dollars and what do you get......