Been to IB many times. Not on the border, but about 10 minutes N of the border. Dude is quite stupid, for sure.

Still throwing down at 59.

Tom Chambers, a four-time All-Star with the Seattle SuperSonics and Phoenix Suns, has been charged with assault stemming from an incident at a Scottsdale, Arizona, restaurant in April.
A Scottsdale police spokesman told the Arizona Republic that Chambers reacted to a man's taunts. The man told police that Chambers grabbed him by the throat and threw him backward, according to TMZ.
Click to expand...

don't be talkin bout my momma

"Multiple reports said Scottsdale (Ariz.) police confirmed Incognito was arrested for disorderly conduct and making threats. TMZ said Incognito was talking to funeral home staffers when he started yelling at people. TMZ reported Incognito said he had guns in his vehicle and “would shoot people.” Incognito also threatened to damage property at the funeral home, TMZ said. Pro Football Talk said Incognito “allegedly made a gun gesture toward one of the employees, and he said that he has guns in his truck.”

Who stays with someone that beats them for a year and a half?

Davis, who has been indefinitely suspended from the team, has been ordered to have no contact with the ex-girlfriend, an LSU student who reported to the LSU police four violent incidents involving Davis during the past 18 months. The woman told police that Davis punched her hard enough to fracture one of her ribs in one instance, began to strangle her in another and later texted that he might kill her.
Click to expand...

PREMO Member
LSU football is on a roll

I bet he hangs out with Drake.

[FONT=&quot]LSU sophomore guard Ed Ingram was suspended by the team on Aug. 3 after an Aug. 2 arrest for "two counts of aggravated sexual assault in Dallas County" involving a minor of an undisclosed age[/FONT]
Click to expand...

not related to Laura

A choker is a player that falls flat when the pressure is on. In this case Jabari is an actual choker, as in grab them by the neck until they can't breathe.

I bet a few of you thought this was about Larry. Nah, it's his distant cousin.

the woman told police that Bird strangled her and threw her against a wall after they got into an argument at Bird's residence.

She also said that Bird kicked her multiple times in the stomach and dragged her away from the door when she tried to leave, before shutting her into a bathroom.

PREMO Member
Ex NFLer has sex with a 12 year old

I guess he was looking for someone to match his intelligence and maturity.

A former standout college running back admitted to having sex with a 12-year-old girl, telling investigators that the sexual encounter was her idea, police said.

After the alleged incident, the girl told her mother she was asleep in Crawford’s living room when the former star running back at West Virginia University entered the room and told her to perform oral sex on him before they had sex, Columbus Police Detective Mark Scruggs testified.

Crawford denied having any sexual contact with the girl when initially questioned by detectives, but he later admitted to the encounter, saying the sexual contact was the girl’s idea, according to Scruggs’ testimony.
Click to expand...

serious jail time for this romeo

Isn't that what all 12 yo girls think about?

PREMO Member
Rae Carruth gets out of jail after 18 years


A millionaire that didn't want to pay child support. How much is a dozen condoms?

The former NFL wide receiver was released from prison Monday after serving more than 18 years for conspiring to murder the mother of his unborn child.

Carruth was found guilty of orchestrating a plot to kill Cherica Adams on Nov. 16, 1999, in Charlotte, North Carolina, to avoid paying child support. Adams was shot four times while driving her car but managed to make a 911 call that helped implicate Carruth.

Adams went into a coma and died less than a month later after the shooting.
The child she was carrying, Chancellor Lee Adams, was delivered by emergency cesarean section but suffers from permanent brain damage and cerebral palsy.
Click to expand...

shoulda got the chair

PREMO Member
4 Jaguars arrested in London for dining and dashing

This is why foreigners have a terrible impression of Americans. 4 entitled #######s skip out on their bill. For christ's sake, they are probably millionaires. The NFL should hire chaperones for these idiots when they are out in public. And who runs up a $64K bill. What did they eat and drink? Pounds of gold? And I guess the fight was just for good measure. Good thing Ray Lewis wasn't with them. Or else they would have hit the trifecta and someone would be chilling in the morgue.

I know when I go to a bar, I always think the drinks are on the house and I don't have to pay for them 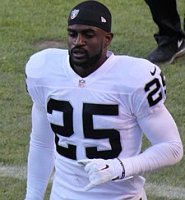 Four players from the Jacksonville Jaguars were arrested in London early Saturday morning, PEOPLE has confirmed.

The athletes — identified by ESPN as cornerback D.J. Hayden, 28, and safeties Ronnie Harrison, 21, Barry Church, 30, and Jarrod Wilson, 24 — were detained by British police over a reported $64,000 unpaid bar tab at the London Reign Nightclub in Piccadilly.

“We are aware that four of our players were detained over restitution of a bill,” the Jaguars said in a statement to PEOPLE.

“Officers attended and spoke with a group of males who had allegedly been attempting to leave the venue without paying a large bill,” reads a Scotland Yard statement. “Four men aged in their 20s were subsequently arrested on suspicion of fraud by false representation and taken to a central London police station for questioning.

NFL.com reported that sources told host Ian Rapoport that a group of players “were sent bottles of champagne and other high-end liquors and ran up a huge bill,” believing that the bottles were free.
“When the bill arrived, the players refused to pay it, believing that it was not what they owed,” the report continued. “An argument ensued and local police made several arrests.”


A source who was inside the club described the sight of four NFL players wrestling a set of London bouncers as “the West End equivalent of King Kong meeting Godzilla,” reports The Sun.
“Things got pretty heated and there was a lot of swearing and shouting and things became physical,” the source said.
Click to expand...

Still can't believe he got 18-24 years and they let that effer out after 18. It was, without a doubt, 1st degree murder, a contract killing. Should have been life without parole at the very least.

Grumpy said:
Still can't believe he got 18-24 years and they let that effer out after 18. It was, without a doubt, 1st degree murder, a contract killing. Should have been life without parole at the very least.
Click to expand...

Locally someone just got 64 years for killing someone. This guy should have gotten north of 30 years at a minimum.

I was stationed with a guy that raped and killed someone. He just got out a few years ago. Kind of gave me the chills.

Monello said:
Locally someone just got 64 years for killing someone. This guy should have gotten north of 30 years at a minimum.

I was stationed with a guy that raped and killed someone. He just got out a few years ago. Kind of gave me the chills.
Click to expand...

One of the guys I grewup and went all the way through school with got 30 Federal Time for Cocaine. Sammy did all 30.

The 2 Rays and Aaron Hernandez would be proud. This isn't your usual college gang rape or plain vanilla DUI. Scarlet is a great team color for this dude's team.

PS, I don't think his parent(s) knew how to spell.

[/FONT][FONT=&quot]Bullock is the ninth current or former Rutgers football player to be arrested since this summer. [/FONT]Eight players were charged in connection with an alleged credit card fraud scheme[FONT=&quot] in August. Four of those players have already been dismissed from or left the program, while four others remain suspended indefinitely until their legal matters are settled.[/FONT]
Click to expand...

imma bust a cap in ya

Was at the game Sunday in Tampa against SF, and some 49'er fans sitting next to me. I asked them about Foster. They were staying at the team hotel - the Grand Hyatt - and watched the TPD walk him out cuffed up on his way to spend the night in the Hillsborough County lock up. Poor baby, and even more stupid was his ex-girlfriend that came back to him asking for more. What is wrong with people?

He originally faced charges of domestic violence, assault with force likely to produce great bodily injury, false imprisonment and vandalism stemming from a March 3 incident involving his then-fiancée.
He also was arrested twice after that incident, on charges of violating a protective order and for violating a condition of his electronic monitoring while on bail.
Click to expand...

he's aldon with the nfl

Now he's the Redskins headache to deal with.

The Washington Redskins claimed linebacker Reuben Foster off waivers from the San Francisco 49ers on Tuesday, three days after he was arrested on a charge of misdemeanor domestic violence.
Foster was subsequently placed on the commissioner's exempt list, meaning he cannot practice or attend games but can be at the team facility on "a reasonable basis" for workouts, meetings and other permitted non-football activities.
Click to expand...

The utterly BRILLIANT NFL commish knew about this months ago..and did absolutely NOTHING/ Sorry KC fans, but the commish must be a KC fan to not have handled this before but now he will have to suspend this dirtbag for the rest of this season.
You must log in or register to reply here.
Share:
Facebook Twitter Reddit Pinterest Tumblr WhatsApp Email Link
Top