The San Francisco Department of Building Inspection is launching an investigation into Twitter over reports the tech company has converted several office rooms into bedrooms for employees, according to KQED Supervising Senior Editor Ted Goldberg.

The department, in comment to KQED, said it's reaching out to building management to set up a "site inspection" and needs to make sure the building is being "used as intended."
Click to expand...

KQED is the local PBS station.

How Elon Musk Handled a Janitors Strike at Twitter HQ​

Elon Musk has a monumental task ahead of him as he continues to assume control of Twitter. He’s already exposed the dirty censorship operations we all knew happened behind closed doors, but it’ll take a lot more time before he has the reins firmly in his hands. Musk, the Tesla creator and billionaire tech innovator, offered $44 billion to buy the company, which entered legal limbo that lasted most of the summer. Now, Musk faced a labor dispute with the local custodian union. They were displeased that the company had fired some 20 workers and protested the move, so Musk terminated the contract, thereby jettisoning the entire janitor workforce.

Whuff. I can just imagine the faces of those who got canned, wide open mouth, wide open eyes.

And now the lawsuits....

“What is happening is an export of the moral framework of San Francisco to Earth,” Musk said during a Twitter Spaces conference Saturday cited by Bloomberg News. “This is kind of a big deal and problematic.”

Twitter, which was founded in San Francisco in 2006, has been at its Market Street location in the downtown Civic Center section since 2011. The lease on its headquarters, which occupies 379,000 square feet, expires in 2028, according to the San Francisco Standard.

The Tesla CEO has a history of uprooting his companies from California after feuding with the state over business regulations.

"A new #TwitterFiles investigation reveals that teams of Twitter employees build blacklists, prevent disfavored tweets from trending, and actively limit the visibility of entire accounts or even trending topics—all in secret, without informing users," journalist Bari Weiss began her thread on Thursday.

"Twitter once had a mission ‘to give everyone the power to create and share ideas and information instantly, without barriers.’ Along the way, barriers nevertheless were erected," Weiss wrote.

Twitter kept a 'secret blacklist' of topics and accounts to prevent them from trending, according to data obtained by journalist Bari Weiss - with conservative commentators deliberately downplayed in what one called 'Soviet-style bulls***',' while another said he was treated 'with more censorship than Hamas'.

Specialist teams were put to work, dealing with 200 cases a day.

Conservative commentators such as Dan Bongino and Charlie Kirk were deliberately put on a 'search blacklist' - in the case of Bongino - or tabbed 'do not amplify,' in the case of Kirk.

'They're treating my Twitter account with more scrutiny and censorship than the prime minister of Iran, than Hamas, than people who do actual terroristic type damage,' said Kirk.

'Now we evidence to show that's exactly why my Twitter account the last couple years has been down 95 percent in engagement.'

Bongino said it was 'Soviet-style bulls***.'

Those who questioned the prevailing COVID orthodoxy of lockdowns and mask mandates, such as Stanford's Dr Jay Bhattacharya, who argued that lockdowns harmed children, were also placed on a 'search blacklist.'

Weiss made the revelations on Twitter Thursday nigbht in the second tranche of what has been termed The Twitter Files.

As journalist Bari Weiss detailed, conservative personalities like Charlie Kirk and Dan Bongino were “blacklisted,” with the visibility of what they were saying suppressed. Other people who said things against the narrative, such as for COVID, were also blacklisted, even if they were prominent scientists, such as Dr. Jay Bhattacharya.

All this was going on, even as Twitter denied it was happening. They claimed they didn’t shadowban, and they certainly didn’t do it based on political ideology. Yet, the files confirm it was going on.

Here’s what Jack Dorsey the former Twitter CEO told Dave Rubin back in 2020.

PREMO Member
Even though Twitter had written standards for what constituted violations, which could have been applied even-handedly and across the board, Twitter moderators routinely ignored the standards, and instead substituted their own subjective personal feelings or intuitions about a particular user’s intent.

For example, one internal memo documenting LibsOfTikTok’s final ban conceded that the user hadn’t actually violated any standards. But the reviewers concluded that Libs “INTENDED” harm by republishing insane lefty TikTok videos. Therefore: banned for her ‘intentions.’ The decision to ban Libs wasn’t made by some intern, either. The deciding committee included the highest levels of Twitter management.

One very odd thing is how secretive Twitter was about it. Why not just SAY you’re throttling someone’s account or shadow banning them or search-banning them? Why deny it? Wouldn’t it be a more effective “punishment” to tell people they’re in trouble?

Secrecy is something inherent with leftists. Communists always deny they are communists. I think maybe life isn’t exciting for lefties unless they feel like they’re part of a secret club or something.

I almost feel like this story isn’t “news,” since everyone knew that Twitter was doing it anyway. But it’s more than news. The exposure of what Twitter was doing is massively cathartic for a lot of gaslit people who had high-follower accounts but saw their hard work crumble after falling into the political crosshairs, or whose expert professional opinions were sidelined and silenced by some 20-something content moderator at Twitter.

The liberal answer won't be to acknowledge, and fix it.. or even to deny it and ignore it. We know their strategy.

They will investigate Musk over and over and over again, until they can 3 or more people to agree on a story about and against him.. they will put the machine in motion to destroy him, and take his billions one dollar at a time by using their weaponized court, and bought and paid judges. It will be miraculous if he survives the next five years, though I think the Liberal machine will be in high gear, in their attempt to ruin him before he moves operations out of San Francisco. He, nor his company, will ever get a fair trial there, and I'm sure they've already found him guilty of multiple felonies, they just haven't found their jurors yet.

The “council” they were a part of was just as much an exercise in eyewash as was Twitter’s efforts to stamp out CSE material. This was just a sinecure to give some politically connected people visibility and a side gig to earn income. At least, I imagine they drew a salary for their participation in whatever the hell it was they did. They got to put the title on their business cards (by the way, the last name “Podesta” is what in Army CID they called a “clue.”) And they did, as our Brit friends would say, f*** all about the problem. Mike Cernovich addressed their accomplishments perfectly, and Elon Musk seemed to agree.

Their joint “resignation” is an obvious political statement — one of them should have been sent to a hospice for terminal TDS patients — to embarrass Musk.

If Elon Musk continues to have suppressing CSE on Twitter as a priority, he’ll be successful. There is no relationship at all between having a man who did his Ph.D. thesis writing about his experiences on Grindr (I’m not joking) and having a successful anti-CSE effort. Rather, I would theorize just the opposite, as the whole “Minor Attracted Person” (the English word is “pedophile,” but that hurts feelings) bullsh** is starting to infect the left in the way that transgenderism has. The solution is to throw enough technical resources at the problem to make the cost-benefit ratio of using Twitter for CSE unfavorable. The last thing needed is a battalion of “policy” gurus confusing the issues.

The bottom line is that before Elon Musk arrived at Twitter, it had shown little interest in combatting CSE on the platform beyond the amount needed to keep governments at bay. I think the reason for that clearly lies within Twitter’s culture. The only way to fix a culture so broken that it would not take down explicit images of a 13-year-old engaging in a sex act is to burn it to the ground and rebuild. Musk is doing that.

Twitter CEO Elon Musk is "hands down" the "worst boss of the year," because he expects too much from his employees, a Washington Post columnist argued on Friday.

The columnist also faulted the Twitter CEO for calling on staff to put in "exceptional" work. 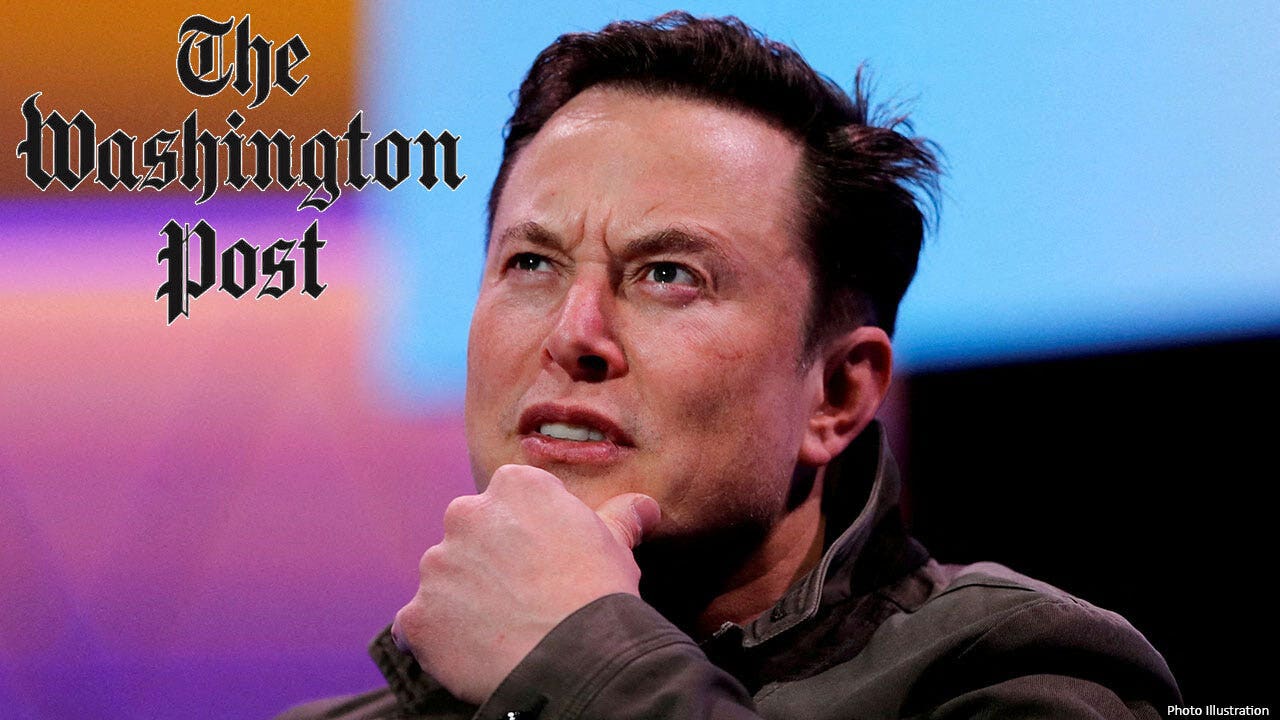 Twitter CEO Elon Musk was attacked as the year's "worst boss" by a Washington Post advice columnist who accused him of working his employees too hard.